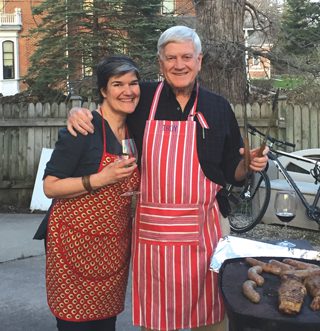 The best recipes, they say, are those known by heart. And the most practiced cooks often work by feel, adapting ideas and recipes to the quality of ingredients, the intensity of the heat as they pass their hand over it – even the ambient temperature of the kitchen. Asking such a cook to write down a go-to recipe – like this marinade for grilled meat or vegetables – is a little like asking for the sequence of his or her DNA.

Fortunately, Decorah chef-of-all-trades Kristen Underwood is used to introducing herself – and improvising. “I’m a professional actor and director by training and a…a…theater entrepreneur by vocation,” she says with a laugh. Since landing in Decorah in the mid-1990s, she’s taught at Luther College, launched Upstart Crow Theatreworks for young actors, co-founded ArtHaus, the local arts education center, and become a speech and drama coach at Decorah High School. On the culinary side, she crafted several beloved lunch favorites working in the deli of Oneota Community Food Co-op and later became an instructor in the store’s kitchen classroom. These days, she’s the covert caterer of dinner parties, business meetings, and other cozy affairs.

Kristen got professional fluidity from her dad, Troy, the originator of the grilling marinade he’s shared with Kristen, she’s shared with numerous friends, and we’re sharing here. An electrical engineer, Troy’s spent a full career in hardware retail before developing and implementing point-of-sale software, mostly for small businesses, in the San Francisco Bay Area.

When he ran a hardware store, in Kristen’s growing-up years, he sold kettle grills and, over time, became quite handy with tongs himself. His bride, DeAnn, is a third-generation native of California’s central coast who grew up on ranch cookouts of grilled chicken and steak, served with green salad, garlic bread and fresh salsa – in the tradition of the area’s Portuguese and Mexican settlers. “Maybe that’s when our family grilling tradition really started,” Kristen muses. “Whatever the origin, it was just something we did – and did together.”

Technique, however, differed between Kristen’s parents. “Both my parents like – no, love – to eat, and both cook, but my mom uses recipes, while my dad almost never does. His style is to sort of flow from an idea.”

The marinade, for example, he picked up in a quaint butcher shop in Provence, France. He went in for some fresh lamb, Kristen explains, “but he wanted it deboned, and while he was waiting, the butcher and another customer, and then another customer – as happens in French culture – got into a heated discussion of the best ways to prepare it.”

Troy, however, did not speak French at the time – he and DeAnn had just begun a tradition of vacationing there with friends. “So he did a lot of smiling and nodding, and chiming in with ‘Ah, oui!” with enthusiasm until he got out of the store with the idea that it involved ‘marinade,’ ‘garlic’ and ‘mustard.’ That was the starting point. He went to work and came to his own conclusions through trial and error.”

If you’ve never ventured into the kitchen without a precise recipe, let this one be your entrée, so to speak:

“Best results come from indirect heat, so we prefer charcoal grilling,” Kristen writes. Get all the coals really hot, then spread them evenly under the cooking surface. If using a gas grill, heat up all the burners, then turn them all down to medium and grill in the center.

“The beauty of cooking with an inexact recipe like this is that it’s pretty forgiving.”

One rookie misstep, Kristen says, is to use heat that’s too direct – it will scorch the garlic in the marinade, giving the whole affair a bitter flavor.

Another no-no is applying the marinade to meats or vegetables that don’t lay very flat on the grill. “This works for chicken pieces – especially boneless thighs – but not whole chicken,” Kristen says. Too steep a vertical angle, and the marinade slides off as it cooks.

And don’t be tempted to mix all the ingredients together at once. “My dad tried that, thinking it would save time, but of course, the olive oil wouldn’t incorporate,” Kristen says. “If you’ve ever tried to make salad dressing, you know it has to be poured in slowly, while whisking or stirring, to emulsify.”

The best thing to do, Kristen says, is just try it. “The beauty of cooking with an inexact recipe like this is that it’s pretty forgiving.” And this, too, is true to family lore.

“My dad’s command of French is almost the stuff of legend now,” she says. “Twenty-seven years of visiting Provence – staying in the same house with the same friends – and he’s still not what you’d call fluent. But while my mom and I – who’ve studied French – might hesitate, trying to be correct, my dad’s just bold. He’s asking what he wants to know in whatever cobbled-together dialect tumbles out. Dutch, Italian, German, same thing,” she says, grinning. “We call him ‘Larry Linguist.’”

Kristine Jepsen is a freelance writer and editor – read more at kristinejepsen.com. She did not know, prior to writing this story, that burnt garlic was so easy to prevent. One additional tip: this marinade complements meats broiled in the oven, as well. 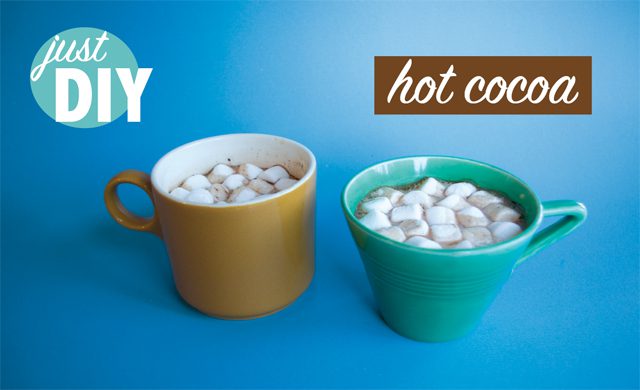 Hot cocoa always sounds lovely, but once I take a drink, the sugar goes straight to my head. So I set out to make a cup that made me feel cozy, not crazy.

Inspire(d) is looking for family recipes. Ones with roots - and stories - that your family has been making & sharing for years. Got any? We'd love to hear!

This amazing recipe for THE BEST BROWNIES EVER just might save the world. Or your life. They're that good. Make them and love us forever! XOX