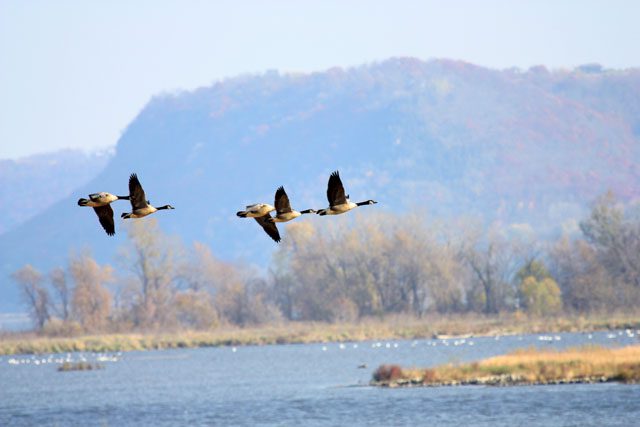 It’s a familiar fall scene: you hear the honking first, then see the v-shaped flock fly over – geese heading to some exotic locale for the winter. It’s obvious why “snow birds” – ironically human – head to warmer climes to avoid the frigid Northern winters, but what about these birds? Why do they migrate back and forth each year, and how do they even know where they’re going?

Approximately 1,800 of the world’s 10,000 bird species take this annual, large-scale movement between their breeding or nesting (summer) homes to their non-breeding (winter) homes each year. (1) Like many things in life, food is the main motivating factor. Birds that nest in the northern hemisphere hang out in the spring to take advantage of the plentiful insect populations, budding plants, and large quantity of places to set up “nest”. As winter sets in and the availability of insects and other food options declines, the birds head south – simple as that. (2) Many of these birds that breed in North America migrate to areas south of the Tropic of Cancer (Southern Mexico, Central and South America and the Lesser and Greater Antilles in the Caribbean Sea) in the fall (August-October) and then winter there until April when they head back to their old stomping grounds up North to breed and raise young. (3)

There are three different types of bird migration: short (moving from a higher to lower elevation on a mountainside), medium (moving a distance that spans several states) and long-distance (generally moving from the northern hemisphere to the southern hemisphere). For short-distance migrants, the reason really is as simple as a need for available food. But the origins of long-distance migration are a little more complicated. What “tips” the birds off that it’s time to get moving varies – days getting shorter and colder, dwindling food supplies, or it even something in their genetic predisposition. (2)

In the period before migration, many birds display higher activity or Zugunruhe – German for “migratory restlessness”. Even cage-raised birds with no environmental cues (e.g. shortening of day and falling temperature) show signs of Zugunruhe, further leading scientists to believe migratory tendencies might be genetically predisposed. (1)

Birds also eat more food pre-migration, storing it as fat. Fat is normally three to five percent of the bird’s mass, but some will almost double their body weights as they pack it on for the trip! The ruby-throated hummingbird, for example, weighs only 4.8 grams but can use stored fat to fuel a non-stop, 24-hour flight across a 600-mile stretch of open water from the U.S. Gulf coast to the Yucatan Peninsula of Mexico! But most songbirds don’t fly to their non-breeding grounds non-stop. They stop a number of times to rest and feed in places called stopover sites. Some birds stop only one day to rest and feed, and then continue their migration. Others will remain at stopover areas for weeks, storing up more fat. The arctic tern may hold the longest distance migration, made possible because they stop over various places to eat fish and feed along the way. The tern migrates about 18,600 miles each year! Amazing! (3)

It’s not just the distance traveled that is amazing, though – the “how” of the travel is pretty wild too. They don’t come equipped with GPS, but somehow migrating birds can cover thousands of miles, often on the same exact “bird highway”, year after year. Even first year birds may migrate – without a guide – to a winter home they have never before seen and return in the spring to their birth land. (2) They use the age-old compasses in the sky to navigate the way – the sun and stars – and also something really cool: the Earth’s magnetic field! Yes, you read that right! Birds apparently have tiny grains of the mineral magnetite just above their nostrils, which helps them find what direction is true north by using the Earth’s magnetic field.

Beyond that, day flyers navigate using the positions of the sun and night flyers find their way by following the patterns of the stars. And – get this: In their very first year of life, those birds memorize the position of the constellations in relation to the North Star! Some birds can also use their sense of small to help find the way. (3)

Many, if not most, birds migrate in flocks, which for larger birds, can conserve energy. Geese save from 12 to 20 percent of the energy they would need to fly alone – and some even fly faster in flock formation! (1)

In the spring, we’ll see them heading back up the “road” home, and now, when you gaze up at the first honk, know it might even be the same exact birds you saw this fall!

Aryn Henning Nichols was constantly amazed as she researched this Science, You’re Super. How cool are migrating birds?!?