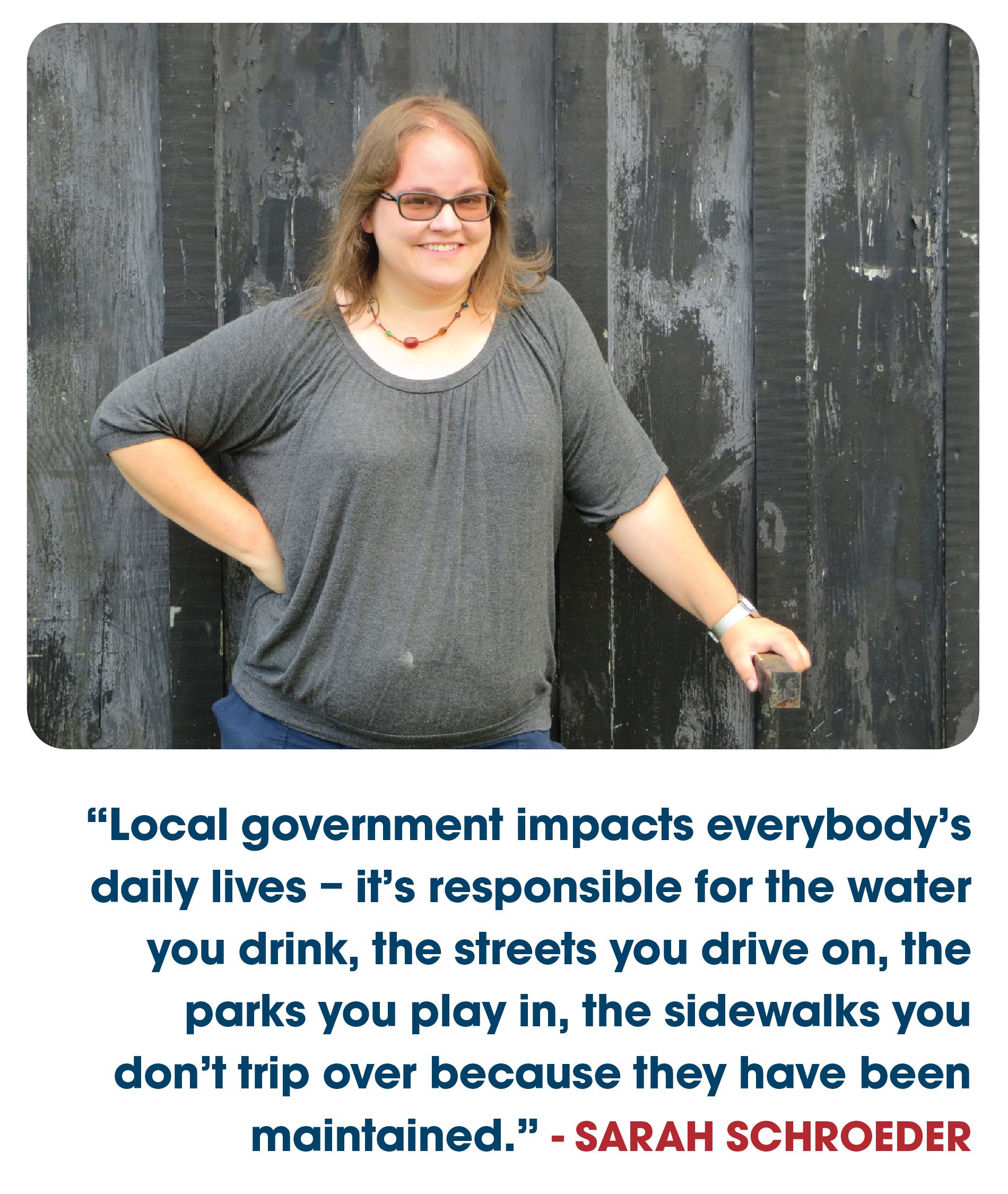 The debate was heated, and, as it turned out, not easily forgotten.

“I felt that the admission prices being proposed for the town’s new swim center were outrageously high,” says Sarah Schroeder of her tenacious verbal sparring with the Spring Grove, Minnesota, city administrator during a 2006 city council meeting. “And I didn’t keep my opinion to myself.”

The moment passed, the admission prices were set, and that was that – or so Schroeder thought.

“The city administrator remembered that encounter and later suggested I consider running for elected office,” she says. “I remember first laughing and then thinking, well…maybe I should.”

The seed planted, Schroeder went on to mount a successful campaign for city council that same year, knocking on doors, passing out flyers, and sharing her ideas with all who took time to listen, including patrons of her mother’s local beauty salon. “I didn’t know much about city government, but I cared very deeply about the future of Spring Grove,” she says of her motivation for entering the political arena. “It was an interesting four years serving on the council, and I learned a lot.”

In January 2015, Schroeder took the oath of office once again, this time as mayor of this thriving small (population 1,300) town. Her responsibilities include presiding over council meetings, serving on various council subcommittees, helping guide the town through emergency situations (as she did when the town received a hoax bomb threat in late July 2016), and, of course, casting votes on city matters.

Her overriding philosophy? “I believe it’s city government’s responsibility to facilitate the betterment of the town,” she says, noting that contention over the city’s extensive, multi-million-dollar Main Street renovation project (now complete) was one of the reasons she decided to get back into local politics. “It’s about not obstructing groups that are working to make the town a better place to live, work, and visit.”

A self-described “joiner, doer, get-involved type of person,” Schroeder recalls engaging her parents in political discussions while she was just in grade school. By high school, she had found another outlet for her love of debate, discussion, and the democratic process – serving on the board of Ye Olde Opera House. “I was young, but I really enjoyed the dynamic of people sharing ideas, agreeing, disagreeing, and ultimately deciding things together,” she says. “It was really fun for me.”

The same holds true today – and that’s a good thing. Schroeder, who works in audio-visual media at Gundersen Lutheran in La Crosse, jokes that “when there is a fifth Tuesday in the month” is the only time she has a week without meetings. In addition to (still!) serving on the opera house board, she also sits on the town’s economic development authority, planning and zoning commission, and fireman’s relief association board.

As she looks optimistically toward reelection this fall, Schroeder says she feels energized by the importance of the work that local citizens have entrusted to her and her fellow council members. “Local government impacts everybody’s daily lives – it’s responsible for the water you drink, the streets you drive on, the parks you play in, the sidewalks you don’t trip over because they have been maintained,” she says. “Very few citizens of Spring Grove want to complain – most are just grateful we care enough to take the time to serve.”

Read more about other folks getting involved here!