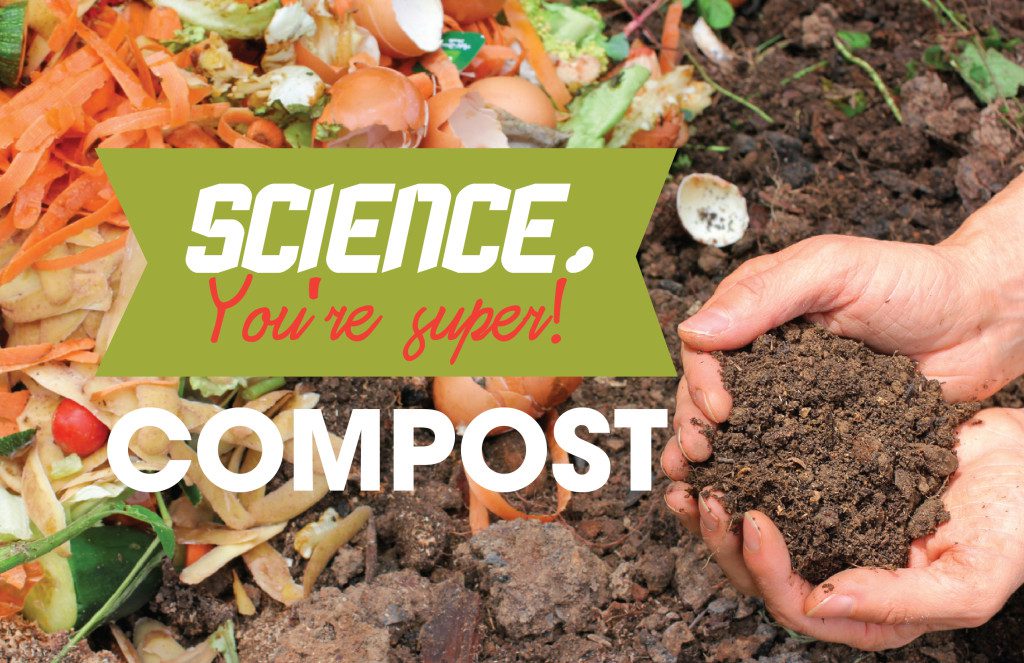 By Kristine Jepsen • Originally published in the Spring 2015 Inspire(d)

You know you’ve wondered about it – that heap in your neighbor’s yard. Or, maybe your child came home from school and breathlessly told you a classmate had buckets full of garbage-eating worms in her basement. Perhaps you yourself have saved kitchen scraps with the hope of turning them to the ‘black gold’ known as compost, rich and weighty and uniform as it crumbles through the fingers.

It’s not magic, but science! Composting is one of the most transformative and successful processes on the planet. It’s a specific series of biological and chemical events that harvests the raw elements from anything once living – blades of grass, banana peels, wood chips, newspaper – and returns them to their most accessible form: soil teeming with life-giving nutrients. Dust to dust.

So why aren’t more people drinking this Kool-Aid? Well, because watching dead things come back to ‘life’ isn’t pretty. There are mushy, squishy parts and lots of bugs. Composting also takes time – ranging from a few months to a year or more, depending on ambient temperatures and handling. And, if proceeding under less-than-optimal conditions – i.e. without the right ratio of materials or influx of oxygen – it can get stinky. Really stinky.

But it’s totally do-able, even with Midwestern winters as they are. And it could save 25-30 percent of your household waste from the landfill, where organic plant matter has little chance of breaking down organically.

There are three common types of composting:
Aerobic – in which the microorganisms doing the dirty work require oxygen;
Anaerobic – actually called putrefaction, in which microorganisms go to town in the absence of oxygen, releasing ammonia, methane gas, and hydrogen sulfide; and
Vermicomposting – a subset of aerobic composting where the work is done primarily by species of worms that adore digesting food scraps and fiber waste.

In the aerobic setting – the fastest and most common in nature and most often replicated by humans – the perfect scenario is to feed dry, carbon-rich “brown” ingredients (newspaper, wood chips, leaves, dry-ish coffee grounds) in proportion to wetter “green” ingredients (vegetable scraps, fruit peels) in combinations that result in the total chemical composition of the pile achieving a ratio is 25:1 or 30:1 (carbon:nitrogen).

This ratio exists because the microorganisms – bacteria, bugs, fungi, etc – that metabolize compost use carbon as fuel, oxidizing it and respiring it as carbon dioxide, as well as combining it with nitrogen and other nutrients to make their own cell protoplasm. It does not, however, mean the pile needs 25 parts brown ingredients to 1 green. This is where it gets a little more confusing: Each food source contains some proportion of brown to green as well— it falls into one camp or the other depending on how dry it is when added. So, all told, a good rule of thumb is to add two parts green to one part brown, or even one-to-one. (See resources below for a link to a handy compost “recipe” calculator.) 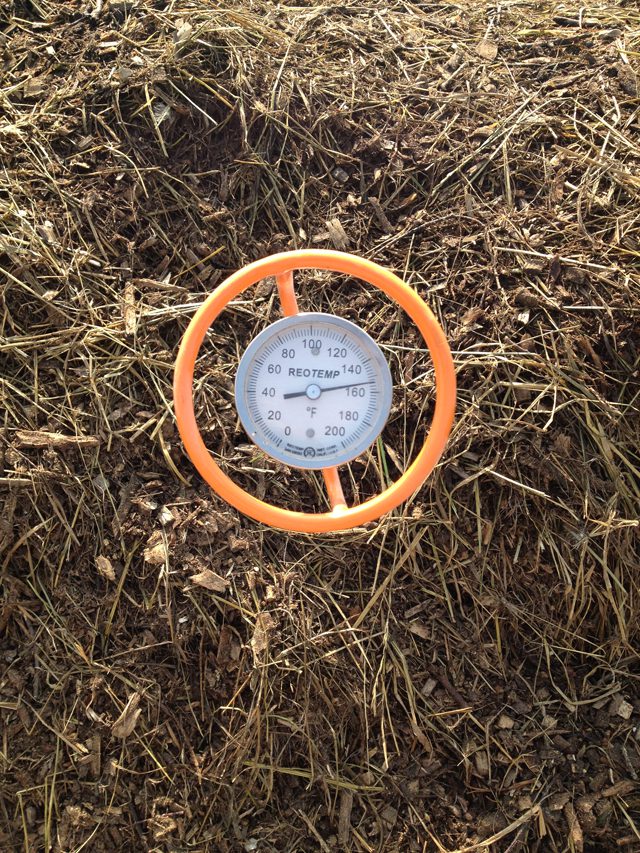 As bacteria chow down and oxidize carbon it generates HEAT (photo by Kristine Jepsen)! Under aerobic composting conditions, just one gram of glucose molecules can release up to 484 to 674 kilogram calories (kcal) of heat – enough kilowatts to brew 4-6 pots of java in the average coffee maker. As compost is digested and microorganisms multiply, the pile heats up and those best suited for each range of temperatures – and the changing food supply – take over.

A compost pile both introduces and sustains a wide variety of bacteria, fungi, and actinomycetes (those wispy, branching growths that often form an extensive colony, or mycelium).

Successive waves of bacteria that tolerate the hot-getting-hotter interior of the pile include mesophilic bacteria (50-115 degrees), which give way to thermophilic bacteria (150-160 degrees – by comparison, the average hot water heater is set around 125 degrees.) After the first 10 days, the original materials in the pile lose their definition and the pile shrinks substantially. Beyond 160 degrees, bacteria die off or run out of sufficient oxygen to continue, and the pile starts to cool, requiring stirring or turning to put undigested materials back in contact with remaining bacteria.

By contrast, compost fungi and actinomycetes cannot handle the hotter interior, restricting them to growth within the first 2-6” beneath the surface. There, they break down much of the tougher plant matter in the pile, usually near the end of the composting period or “curing” when the temperatures have begun to drop and they can survive across a larger part of the pile.

Toward the end, mites, millipedes, centipedes, springtails, beetles and earthworms also flourish and add their castings to the nutrient density of the mixture. In fact, the size of the organisms present in the pile can indicate the mixture’s maturity, as the organisms on each level of the food chain keep the populations of the next lower level in check.

Compost – or humus – is ‘done’ when it ‘stabilizes’ and its internal temperature returns to ambient temperature, even when turned or stirred. Most of the original materials should be unrecognizable, though tough, woody items like sunflower stems, corncobs, and avocado pits will still be intact. These can be removed (laden with beneficial bacteria) and incorporated into a new pile for another round. The remaining, sifted compost —reduced to about a third the volume of its original inputs! — should cure or rest for three or more months before use as potting soil, mulch or a soil amendment. It will be deep brown in color, uniform in particle size (small), and smell ‘good’ and earthy – like a forest floor. 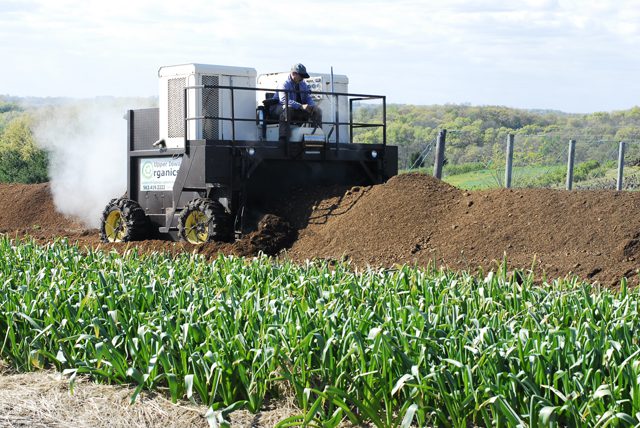 Commercial compost – for sale at garden centers – is regulated by state agencies, says Marty Grimm, who sells bulk commercial compost from his farm east of Decorah through his company, Upper Iowa Organics (pictured above, photo by Kristine Jepsen). His windrow-style piles, centered on his 34 acres, must maintain an internal temperature of 131 degrees or more for 15 consecutive days, measured by a recognized compost thermometer, before it can be ‘screened’ to remove any ‘overs’ (oversize particles). Then it cures for 3-9 months before it’s ready for sale. “That’s the state’s regulation for ensuring harmful pathogens don’t survive,” Grimm explains. “Compost is quantified and classified as a fertilizer, just like the synthetics.”

If you don’t have room or desire to build a bin or pile, vermicomposting is aerobic composting in miniature – where the red wiggler or manure worm (Eisensia foetida) or the red worm (Lumbricus rebellus) chew up the layers of brown and green inputs, leaving rich, uniform castings.

Plastic worm bins need to be perforated with several holes on all sides for ventilation, and a coarse cloth (coconut mat, burlap) should line the bottom of each bin. When a bin is full and castings uniform, the worms can be ‘removed’ by stacking a new bin containing fresh food on top or alongside it. After mere days, the worms will migrate through the ventilation holes to the fresh grub.

“As with most things, worms will thrive if you just pay attention,” says Jim Tripp, an avid gardener and founding member of Decorah Urban Gardens (DUG). “If they’re slowing down, you have to adjust.” Is the air temp colder? Are they not getting through the wetter materials and need another sheet of newspaper laid on top? “Also, no discussion of worm bins should go without stating: ‘Worms LOVE coffee grounds. Love them.’”

Just think about that next time you’re tossing a filter in the trash.

Who knows? You just might find yourself commissioning a scrap bucket to keep under the sink.

Every windowsill in Kristine Jepsen’s home has at least one plant in it. And she pots up jade starts rather compulsively. It’s time to cultivate compost, too – no more excuses! In addition to writing for Inspire(d), she publishes creative nonfiction and other projects on her site: kristinejepsen.com.

How to get started with aerobic composting

Choose a well-drained site and a retaining structure, if desired (wooden pallets, for example, or a rotating bin – you can purchase special bins just for composting that are built on a “spit” for easy spinning)

Alternate 2-4” layers of brown and green materials, roughly adding equal amounts by weight (which means adding more of the drier, lighter brown stuff to balance out the heavier green stuff). Some sources propose adding this volume of material and just stirring it uniformly, instead of messing with layers. Water compost lightly as layers are added.

Keep the site 3’x3’x3’ or thereabouts so the work of stirring it or turning it is manageable. ‘Turning’ means removing everything from the bin and putting it back in, moving material from the edges of the pile to the middle, as possible. Keeping the site compact also encourages bacterial activity and keeps the heat from dissipating in cooler temperatures.

Continue to add material to a pile, as warranted by the space, burying food scraps in the center and covering each green addition with a layer of ‘brown’ inputs, such as dry leaves.

Composting gone wrong: Common mistakes and how to fix them

Don’t overwater or overfeed with nitrogen-rich “green” ingredients. The microbes, including worms, can’t keep up. If your pile or bin feels more moist than a damp (not dripping) wash rag, back off on the green stuff and add some dry “brown” stuff to restore order.

Stinky, slimy mess? Turn the pile uniformly or stir the worm bin. Every phase of aerobic composting requires an influx of oxygen. Check your carbon-to-nitrogen ratio of ingredients to adjust for moisture, too. Keep in mind that some ingredients can go either way: Grass clippings are full of nitrogen (green) when they’re fresh and wet. They’re more in the ‘brown’ camp once they’ve dried.

Won’t heat up? The pile likely contains too much carbon (brown ingredients). Mix more green inputs into the pile and aerate thoroughly. If still too dry, water the whole pile and stir again.

Don’t compost colored paper – the dyes that create the color may contain metals and other chemicals that harm beneficial composting bacteria.

The chemistry of composting

Good list of browns and greens — with their carbon:nitrogen ratios