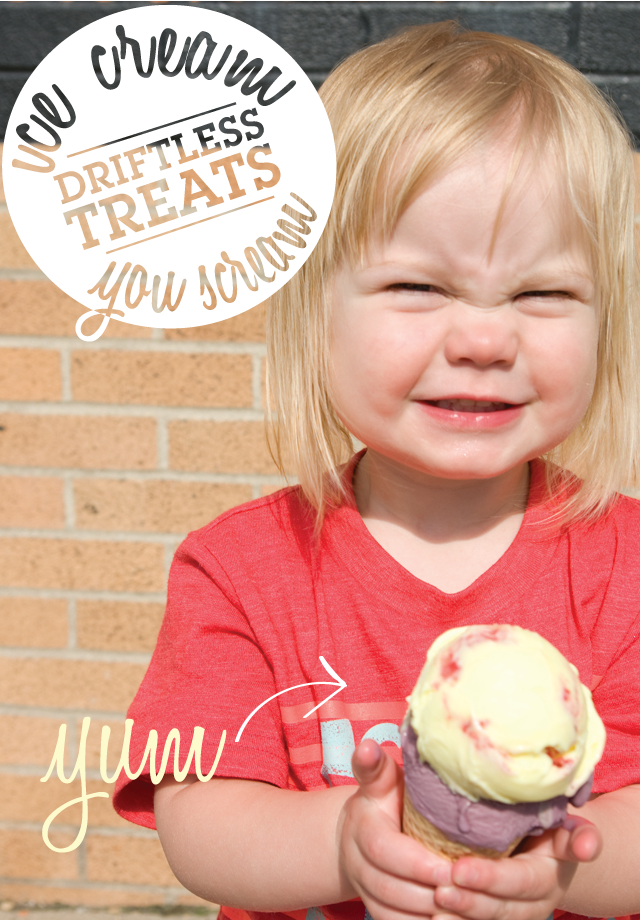 Deep in the recesses of the Library of Congress lies a treasured document authored by Thomas Jefferson – and, no, it’s not a copy of the Declaration of Independence.

This document, handwritten by Jefferson himself in the 1780s, calls for “two bottles of good cream,” “six yolks of eggs,” “a half-pound of sugar,” and “one vanilla bean.” It is, according to the library, one of the first recipes for ice cream recorded in the United States.

Today, more than three centuries later, the International Dairy Foods Association ranks Americans as the top consumers of ice cream in the world, with more than 48 pints of ice cream downed per person per year. So pervasive is our passion for ice cream, in fact, that Ronald Reagan declared July as National Ice Cream Month exactly three decades ago.

Luckily, area residents will find plenty of ice cream shops eager to satisfy their cravings for this delicious frozen concoction throughout the summer months. Whether your preference is soft-serve or hand-dipped, chocolate or vanilla, go on, read on, and then treat yourself to a cup or cone of ice cream at one (or all!) of the following Driftless Region establishments. 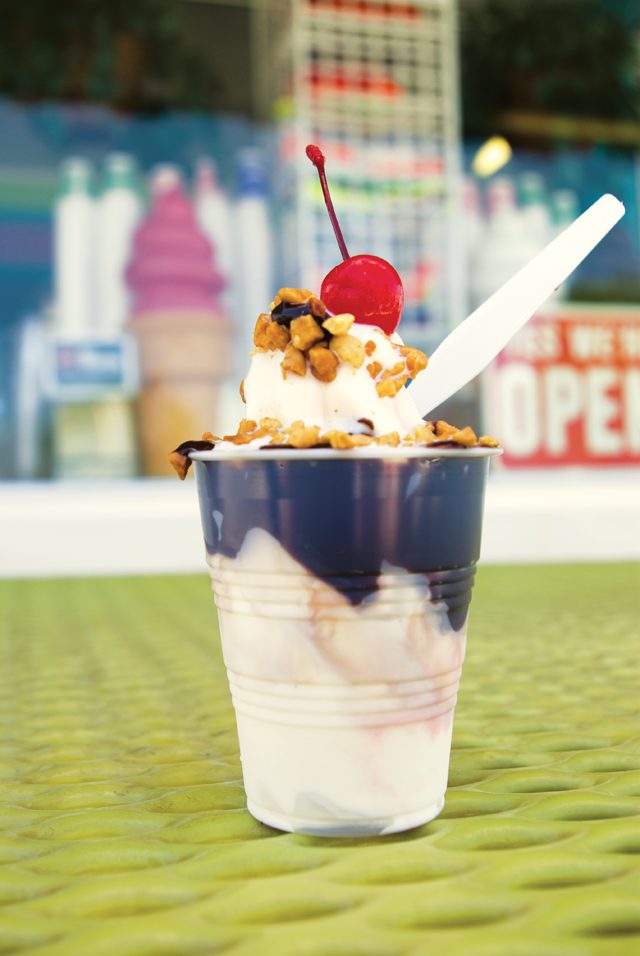 It may not rank up there with Thanksgiving or the Fourth of July, but make no mistake about it: Opening day at the Whippy Dip is among the most anticipated days of the year in Winneshiek County.

Owner Rosie Carolan estimates a couple thousand people indulged in a soft-serve ice-cream treat – cookie-dough Tornado, anyone? – at the Whippy Dip on opening day last March. “We had long lines stretching both directions along College Drive for hours,” she says.

There’s nothing fancy about the Whippy Dip, but therein lies its (considerable) charm. Whether you crave vanilla or chocolate (or both!), served in a cone or cup, this iconic Decorah business – marking 60 years this past spring – sticks to the basics, dishing up ice cream plain (or with any number of toppings) sure to please even the most discriminating palates. “We’ve heard very few complaints,” says Carolan, who, with her husband, Greg, has owned and operated the Whippy Dip since 1985.

According to Carolan, the Whippy Dip’s fans have a former Decorah milkman, Derwood Baker, to thank for opening the shop back in 1954. “He delivered milk early in the morning and then worked here in the afternoon,” says Carolan, the fifth Whippy Dip owner. And while the ice cream machines, menu, and milk supplier have changed over the years, the bricks and mortar have remained the same.

“We have a great building in a great location,” she says. “We’re near the campground, the bike trail, the movie theatre, Luther College, the local schools, the swimming pool, and, of course, the Upper Iowa River.”

Still, location – or the contagious Whippy Dip nostalgia – doesn’t entirely account for the establishment’s staying power. “We use premium dairy products to ensure our ice cream is rich and creamy; we offer other fare like tacos-in-a-bag and foot-long hotdogs; and we have unbelievable help,” says Carolan, who employs nearly two-dozen high school students as well as a handful of adults. (Her husband, Greg, power-washes the premises every morning and serves as its go-to mechanic.)

Carolan admits that those sunny summer Friday nights when lines stretch down College Drive do generate a bit of stress, but that comes with the terrain of running such a well-known and loved business.

And the feeling is mutual, says Carolan: “I love running the Whippy Dip – I love my employees, I love our customers, and I am very grateful to be doing what I am doing.” 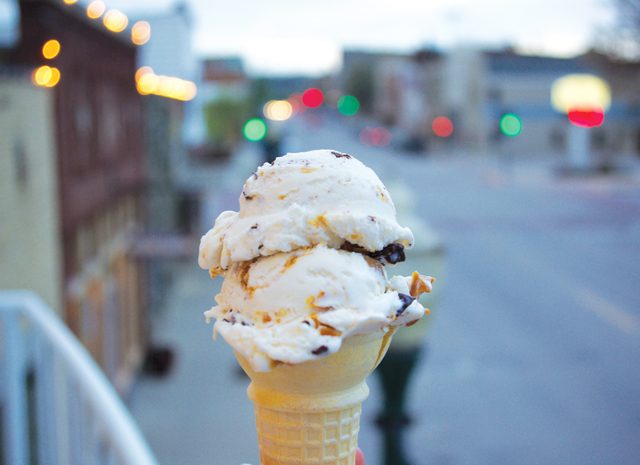 Craig Running knew a good thing when he saw it.

A longtime Decorah resident – he was raised in the town – Running believed buying retail space along the town’s main Water Street was a “win-win situation” when he seized the opportunity in 1999.

“I tore down the rental building that was here and then spent eight years designing and building this space,” he says of the Sugar Bowl, the balconied, two-storied ice cream parlor he opened in 2008. “I thought that there was a niche market for quality, hand-dipped ice cream, and I was pretty sure it would work…who doesn’t love ice cream?”

Who indeed – especially when that ice cream is made by the Chocolate Shoppe, an award-winning producer of hand-dipped ice cream headquartered in Madison, Wisconsin.

According to Running, it was more than serendipity that led him to select the Chocolate Shoppe as his ice cream vendor. “I had a conversation with a man who made it a point to mention that the best ice cream he had ever had was from the Chocolate Shoppe,” he says. “I called up the company and told them I was opening an ice cream shop, and they immediately sent 16 different pints to my front door. By the time I polished off the first pint, the decision had been made.”

In 2016 Running decided it was time to hang up the scoop – and when across-the-street neighbors Brittany and Nathan Todd shown interest, a smooth transition of delicious ice cream serving continued! The Sugar Bowl currently dishes up 24 different flavors of the Chocolate Shoppe’s ice cream from his dipping station, with choices ranging from Old Fashioned Vanilla to Kitty Kitty Bang Bang (cheesecake-flavored ice cream with raspberry flavoring, Oreos, and chocolate chunks). The most popular flavors? Zanzibar Chocolate (containing three kinds of cocoa) and Zoreo (made of Zanzibar ice cream, marshmallows, Oreos, and chocolate chunks).

And while ice cream remains the star of this Water Street establishment, its décor – described by Running as “industrial deco” – has garnered plenty of admirers as well.

The bright-white building contains a treasure trove of antiques, from a 1952 Whizzer motorbike to a Popsicle Red Ball Express train (one of only about 200 made). “It was a long process, but I enjoyed acquiring these items,” he says. “I had collected and restored cars, trucks, and motorcycles for a long time so it wasn’t such a stretch to start collecting and restoring things that were displayable here.”

As Running envisioned when he opened the Sugar Bowl, the combination of rich-and-creamy ice cream and eye-catching antiques has proved irresistible for many a Decorah resident and visitor. “It’s been quite successful,” he says with a smile. “And business gets better every year.” 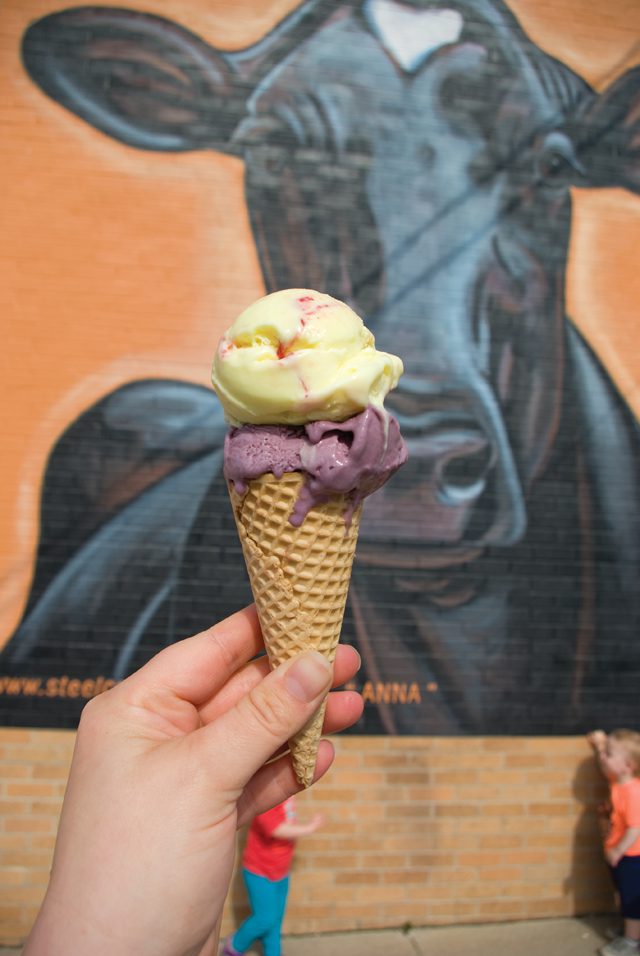 Homestead Dairy has dished up ice cream for less than three years, but it already serves a frozen treat literally fit for a king.

The dairy had been making ice cream for only a few months when Luther College’s general manager of dining services presented a once-in-a-lifetime opportunity: Would the Homestead Dairy accept a commission to make cinnamon ice cream in honor of Norway’s King Harald V and Queen Sonja for an all-Iowa-foods banquet?

They jumped at the chance.

She need not have worried: King Harald gave the cinnamon ice cream an unequivocal thumbs-up at a news conference held at the Vesterheim Norwegian-American Museum a few hours after the banquet.

Few would disagree with that assessment. The dairy has created 40 ice cream flavors to date. “We take the time to ensure we produce a quality product,” says Weighner, who credits the rich taste and creamy texture of its ice cream to the fact that it uses pasteurized, not homogenized milk, meaning the milk is less processed. “We also figure out the right amount of flavorings and mix-ins and make only small batches at a time.”

WW Homestead opened the Waukon dairy in 2012, and it has quickly become a “must stop” in the region for cheese curds, ice cream, and soon – coffee! In addition to seating both inside and out, the parlor offers 16 different flavors in its dipping station – coffee toffee is Weighner’s favorite – and most of its other two-dozen flavors (including the cinnamon!) are available in take-home pint cartons too. The dairy also sells fresh creamline milk, cheese curds, butter, block cheese, and ice-cream cakes. A full coffee bar addition should be open for RAGBRAI riders in July 2017, making this a “midwest delicacy one stop shop”!

“It’s hard work but very fun to come up with new flavors that people really like,” says Weighner when asked the best part of running an ice-cream shop. “There’s really nothing that compares to seeing families spending time here together enjoying our ice cream.” 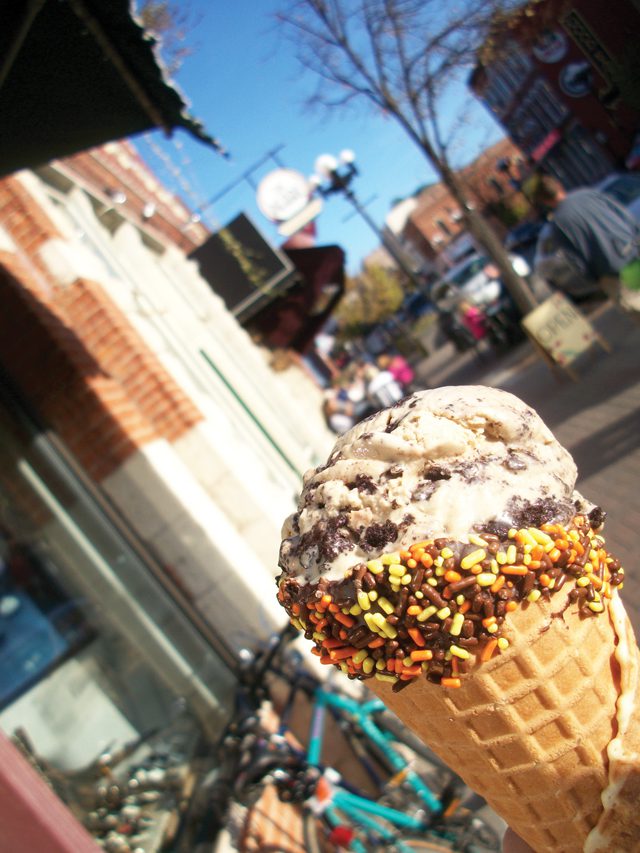 Not all that long ago, bikers were a familiar sight at 207 Pearl Street in downtown La Crosse. “It was a very popular biker bar,” recalls T.J. Peterslie. He and his wife, Michelle, bought the building in 1990. “On a nice Saturday afternoon, it wasn’t unusual to see more than 80 choppers parked outside.”

Today, the location attracts a very different clientele. Gone are the choppers. In their place? Tables and chairs packed with ice cream lovers of all ages enjoying a scoop from The Pearl Ice Cream Parlor.

Peterslie describes the transformation as a labor of love.

“Ice cream parlors were a prime social meeting place from the 1800s into the 1900s,” he says. “We wanted the Pearl to be a place where people could bring the whole family, enjoy a treat, and step back in time to when things were simpler and less stressful.”

To evoke the feel of an old-fashioned ice-cream parlor, the Peterslies scoured the Midwest, picking up the tables, chairs, mixers, sundae dishes, dipping cabinets (circa 1940s), and a bubble-gum machine that all help give the Pearl its unique charm. “You can’t just order these things,” he says.

It was Peterslie’s late father, Oscar, who created most of the ice cream flavors – from Mississippi mud and butter pecan to the bestselling vanilla – as well as the fudge and other sweet confections for which the Pearl has become so revered in and well beyond La Crosse over the past two decades. (The Peterslie’s daughters – Dani, Azia, and Tara – have followed in their grandfather’s footsteps and make much of the ice cream and candy sold at the Pearl these days.)

“My dad was adamant that we serve homemade ice cream, and he is why the Pearl is here,” he says. “We enjoyed designing the Pearl, but once we opened it, running it was like running any other business. My dad took ice cream-making courses at the University of Wisconsin in Madison, researched recipes online, bought our ice cream-making equipment down in Texas, and was just magic working behind the counter.”

While remaining tight-lipped on their ice cream making process – “We can’t really talk too much about how we do what we do,” he says – Peterslie says they’ve reaped nothing but rewards since entering the ice cream biz more than two decades ago.

“It’s a happy business,” he says. “When customers come in, they have the attitude that they are going to treat themselves to something good, and you in turn feel good knowing you are selling them something that they really want.”

ALSO WELL WORTH THE TRIP

Top off a burger and fries with a shake, sundae, or cone served by carhops at this classic drive-in restaurant.

Wonder where the popular Yotopia Frozen Yogurt in downtown Iowa City, Iowa, procures its frozen yogurt? Look no further than Country View Dairy, purveyor of many flavors of yogurt found in stores throughout the Driftless Region.

It’s not just the home of the ButterBurger. This restaurant serves fresh soft-serve frozen custard with a variety of toppings.

Sundae anyone? Follow up a tasty pizza with your choice of classic hand-dipped ice cream flavors and treats.

Sara Friedl-Putnam, an avid ice cream lover, thoroughly enjoyed doing “research” for this article and highly recommends readers sample a treat from all of the friendly Driftless Region establishments profiled in it.