Looking for something fun to do with your kiddos  (or guests?) on Thanksgiving? Or even today (brrr…it’s cold). Or maybe you’re looking for table favors? These turkey finger puppets are super fun, easy, and cute! Just click below for a downloadable pdf! 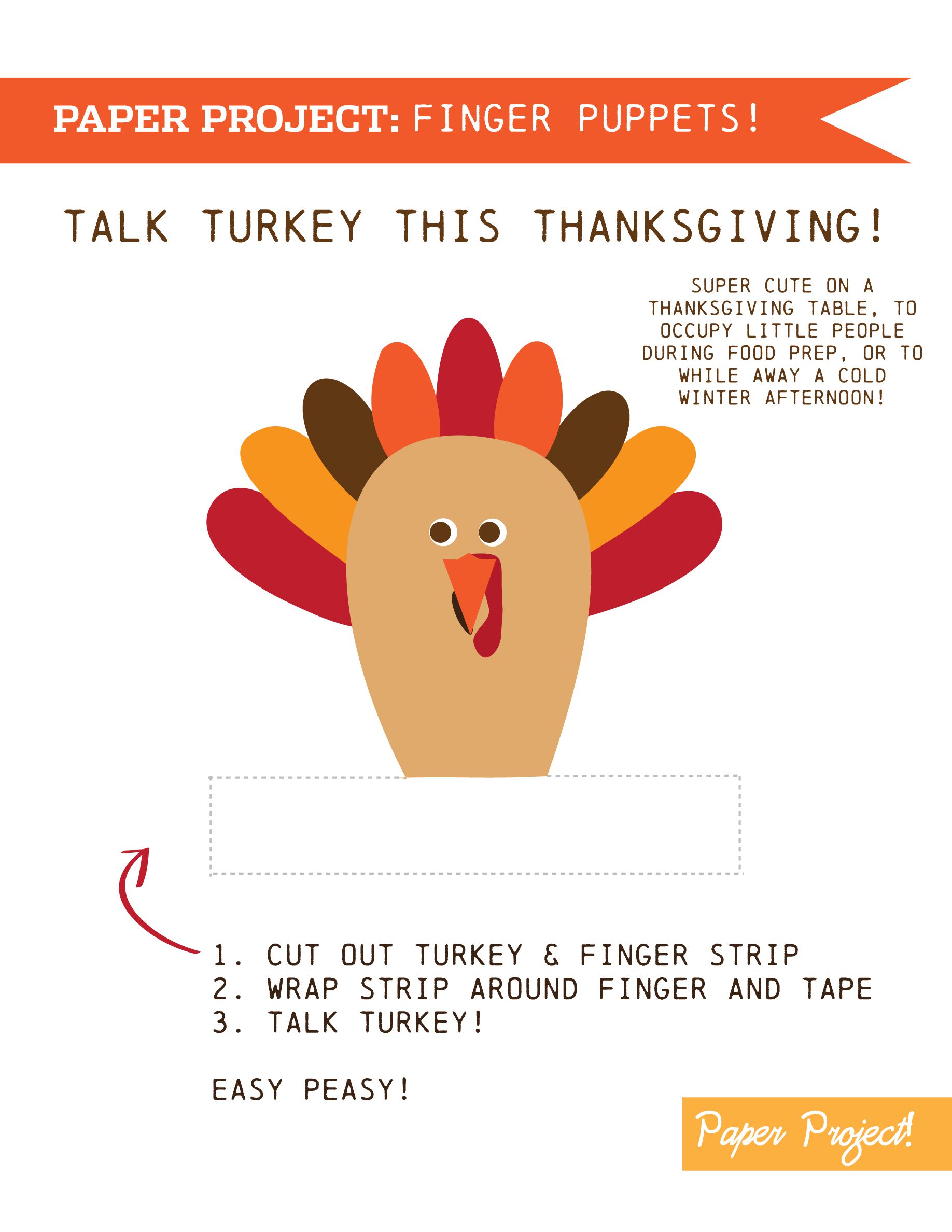 Contrary to popular belief, Thanksgiving was not invented by the National Football League to sell another days worth of beer advertising. It is, however, a traditional American holiday during which families and friends from all over the United States gather together once a year to catch up and eat dinner at the same time: halftime…ha! (And sometimes once a year is far too often!)

Traditionally as well, the star attraction of the feast is none other than our Native American fowl, the turkey. My lovely wife, Brenda, and I have hosted Thanksgiving dinner for probably the last 25 years. It is not unusual to have 50 or 60 people show up including both sides of the family, friends, as well as a couple reprobates of society thrown into the fray. That amount of humanity necessitates a large quantity of food and drink. A couple of fresh, not frozen, 20-pound-plus turkeys and a ham the size of a small car engine are always on the roster.

How DO you do it, you ask? Well, since we have been doing this extravaganza so long, I keep trying to come up with new ways to prepare the upcoming meal. First: get help. Especially when you’re combining turkey and hot oil, like we did two years ago.

On Wednesday, Thanksgiving Eve, our daughter Fawn came over to help prep. While Brenda tidied up the house, Fawn and I toasted up six loaves of white and whole wheat bread. Chop! Chop! Chop! Our knives flew through the bread, fresh mushrooms, celery, red onions, and cloves of the stinky rose, garlic. It was human vegematic at its best.

I set about prepping our big birds. Turkey number one I submersed in a kosher saltwater brine with sliced up oranges, lemons, and limes. Turkey number two was destined to be the star attraction. We were going to deep fat fry it the next day on the east deck. So I made up a concoction of apple juice, onion juice, garlic juice, and Cajun seasoning and with a syringe, injected it all throughout the bird. We then rubbed the entire bird with Cajun seasoning and put it to rest for the night.

Early Thanksgiving morning, I put coffee on and started working on our brined turkey. After patting it dry, I laid it on its back and gently worked my hands under the skin covering the breasts. Once the skin was loosened up, I placed pads of butter and fresh sage leaves underneath. We were good to go. Into the oven at 425 degrees for 20 minutes, breast side down. I turned it over on its back and reduced the heat to 325 degrees. Rule of thumb with a bird this size is to cook it for fifteen minutes a pound. I always check, however. You want to insert a meat thermometer into the thigh meat and have it read 165 degrees and have the juices run clear. Try not to overcook it or you will have a dried disaster on your hands. Trust me, I have been there.

Time to finish the stuffing.

Three pounds of fried, drained pork sausage, a dozen whipped eggs, enough chicken stock to make it moist, a little dried sage, and some salt and fresh ground black pepper all went into the mixture. Into a roaster covered with aluminum foil at about 200 degrees. Whew! Time for a cup of coffee with cream. The adrenaline was starting to kick in. A lot of prep lay ahead and time was growing shorter.

The ham was next on the agenda: cut a crisscross pattern, place it in a roaster, cover with pineapple slices and baste with rosé wine.

Back to baste turkey number one, then on to the spectacle: my outside cooker. You probably have seen those outside turkey cookers advertised on TV complete with a perforated stainless steel basket to lower the turkey into the hot oil. Well, our setup is a little more sophisticated. My outside cooker is about waist high. Add to that a tall pot. Add peanut oil about halfway up. The trick is enough oil to cover turkey number two but not enough to boil over. We straighten out a wire coat hanger and truss up the turkey’s legs with one end. We then make a loop on the other end. When the oil is at 360 degrees on a candy thermometer, it is time to give our fowl a soothing oil bubble bath. At high noon, the two sons of the family, Shanon and Conor, climb up the ladders with a broom handle inserted through the wire loop and gently lower the turkey into the churning froth. Talk about shanty Irish!

Back inside to baste.

Fawn, thank God, showed up just in time to help peel and cook 40 pounds of potatoes and help concoct a salad of iceberg and spring mix lettuces, red onions, green peppers, green and black olives, tomatoes, grapes, strawberries, and feta cheese. Guests started to arrive bearing side dishes, desserts and beverages of their choice. Pretty soon every counter in the kitchen was covered with delectable delights.

I started the potatoes boiling then went to check on our boiling bird. Not quite ready. It takes about three minutes a pound to cook. When the turkey floats, it is good to go, but always do that check with a meat thermometer. Back in the house, I made gravy and quickly mashed the potatoes. The time had grown near to pull this all together.

Brenda had decorated marvelously, and also had brought out every plate in the house along with all of the silverware and wineglasses. We pulled the turkeys and ham and placed them on platters. While they rested for ten minutes, we gathered everyone together and my brother, Pat, led us in a prayer of thanks. Three of us started carving, plates began filling, and pretty soon every available seat in the house was occupied. Even the steps leading upstairs were filled with some of the younger folk. It was a feeding frenzy. Seconds, Thirds. An hour later, it was all over but the crying. Except for cleanup, of course….

Brenda, her sisters, and sister in-law stepped up to the plate, er plates, and in no time reduced a mountain of dishes into oblivion. The rest of us sipped our beverages contentedly, engaged in small talk, played cards, slept, and occasionally watched on TV guys with helmets and shoulder pads beat up on each other. With a glass of wine in hand, I mused to my brother in-law “You know if Benjamin Franklin had had his way, the national bird of the country would have been the turkey. That means a certain football team from Pennsylvania might have called the Philadelphia Turkeys. Now there is food for thought.” Speaking of food, it was time to start a second round and dive into the leftovers. Nothing like a cold turkey or ham sandwich. Ah, life is good.

Toast bread and cut into ½ inch pieces. In a large mixing bowl, combine toast, mushrooms, celery, onions, and garlic. Fry up sausage and drain. Add to mixture along with almonds. Lightly season with sage, salt, and pepper. Toss and season again. Repeat twice more. Add eggs and mix thoroughly. Add chicken broth and mix well. Bake in oven in a large covered casserole dish at 325 degrees for 1 ½ to 2 hours. Stuffing is ready when the middle reaches 165 degrees. (Serves 12-16)

Jim McCaffrey is a chef, author, and co-owner with his family of McCaffrey’s Dolce Vita restaurant and Twin Springs Bakery just outside Decorah. He is author of a humorous cookbook titled “Midwest Cornfusion.” He has been in the food  industry in one way or another for 40 years.