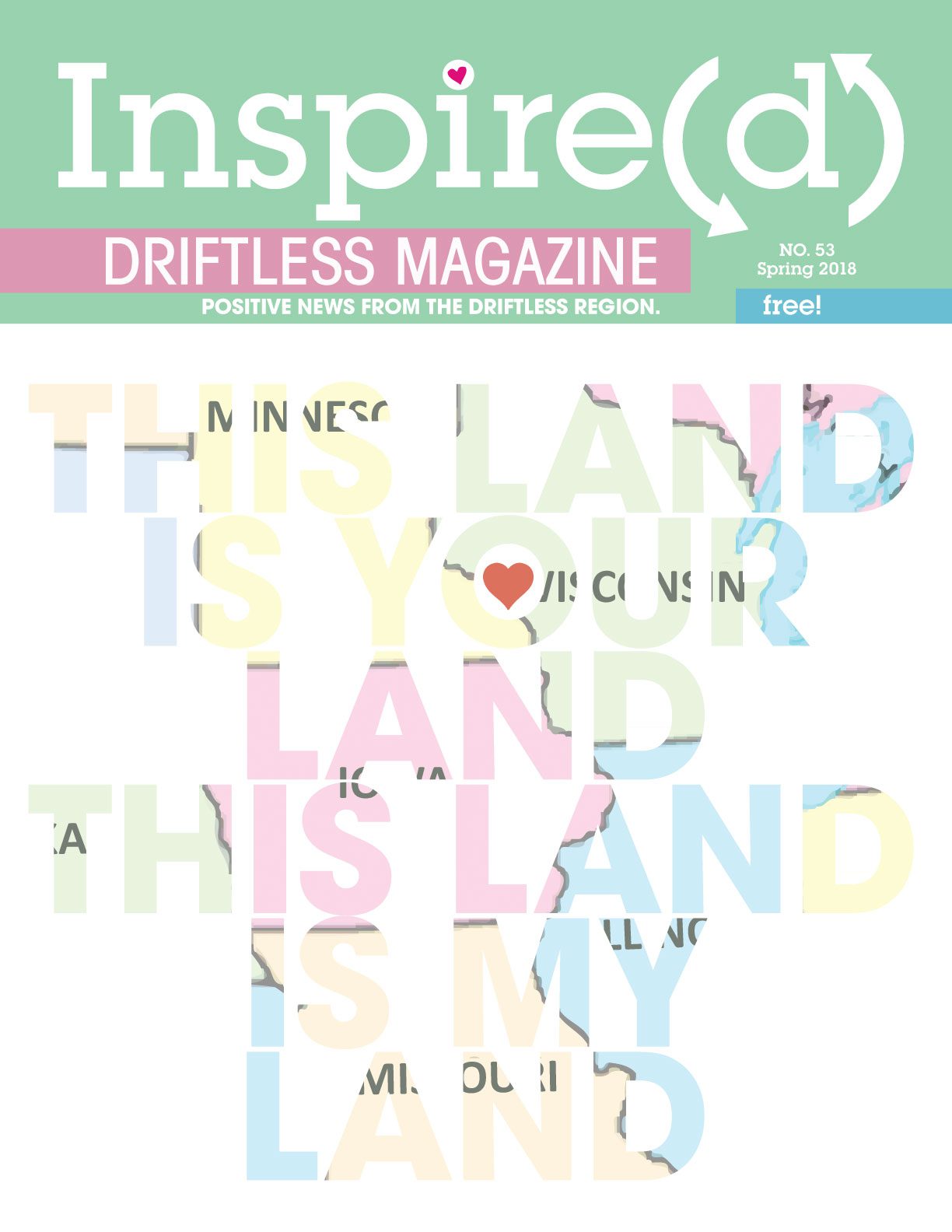 Here’s what you’ve got to get excited about in the Spring 2018 Inspire(d): 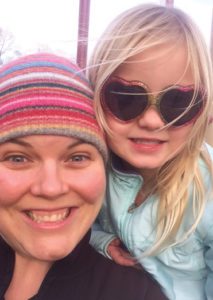 “This land is your land. This land is my land.” That Woodie Guthrie song was on a loop in my brain while I was making this magazine (you’re welcome for that!).

It’s a notion that weaves this whole issue together, from life across generations, to a sense of home, feelings of patriotism, and the important fact that we’ve got to take care of this land below our feet.

This land is your land, this land is my land… and we are all immigrants here together. Benji Nichols put together an amazing Community Feature about Westby, Wisconsin – it’s the story of the Norwegian immigrants who settled the town, and how Westby folks are working hard – together – to connect new opportunities with old traditions. It really gets to the heart of what we all should be doing in our hometowns: Moving forward with positivity (pg. 48).

We’ve got a new writer from Southeast Minnesota this issue: Maggie Sonnek (welcome, Maggie!). She tells us about the National Eagle Center in Wabasha, Minnesota, and how the town and one non-profit helped to save one of the most important symbols of America – the bald eagle (pg. 14).

Speaking of America, Sara Friedl-Putnam caught up with the filmmakers behind the States of America documentary project (pg. 20) – they’re highlighting one person per US state, and sharing one per month on their website, statesfilm.com. Sara also chatted with the three women featured from our corner of the world – Beth Rotto (Iowa), Kathy Christenson (Minnesota – coming soon to statesfilms.com), and Xong Xiong (Wisconsin).

One of the 10 Most Important Things we learned from our 10 years of making Inspire(d) Magazine (we outlined that in the Fall 2017 Inspire(d) Magazine) was that we’ve gotta take care of this earth. In honor of this, and Earth Day April 22, I put together some earth-loving ideas, plus an infographic on how to do what our family calls “Super Hero Walks” (pg. 32).

There’s nothing that makes me love the earth more than plants, and they’ve got a lot of them at K&K Gardens in Hawkeye, Iowa. Keith and Kelli have been running their garden business for more than two decades – all while working full-time jobs at their chosen professions! We loved interviewing Keith for this issue’s Sum of Your Business (pg. 41)!

Kristine Jepsen fills us in on the history of the Luren Singers as they celebrate their 150th anniversary, and the details on the upcoming Sangerfest (pg. 62).

What other awesome things will you find in this Inspire(d)? If you’re feeling a little Spring Fever, check out page 60 for some ideas to get out of the house this spring, and if you’re out of ideas for Mother’s Day presents, look no further than our Paper Project this issue – it’s a Mini Magazine (pg. 31 – templates coming here SOON)! Plus, our probit is an amazing couple from Wisconsin: Eleanor and Tip Bagstad.

Happy Spring, friends! As the world comes back to life, we hope you are inspired in yours. 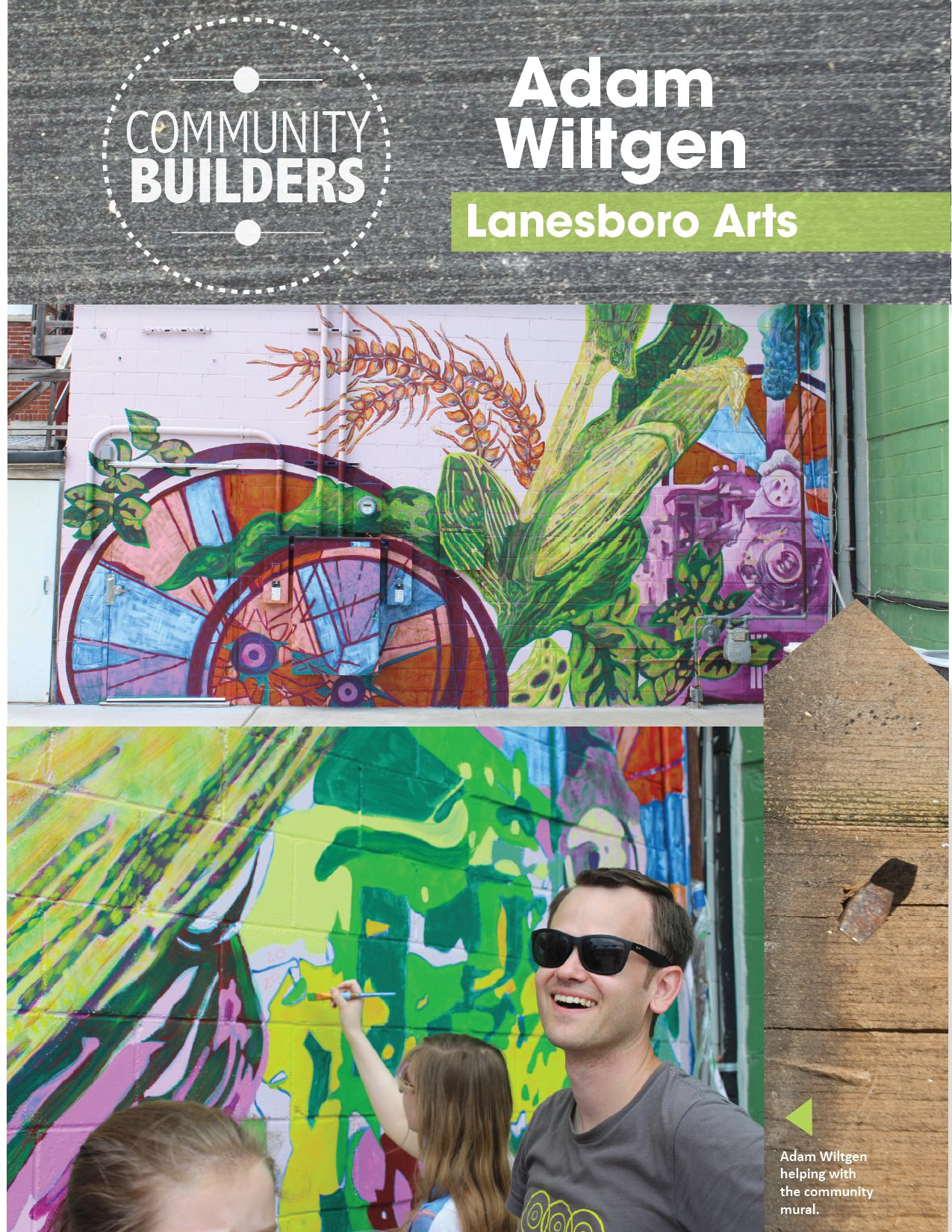 There’s some serious pep in Adam Wiltgen’s step as he leads an impromptu tour of the arts campus in Lanesboro, a small, but vibrant, community in Southeast Minnesota.

A quick stop at Gateway Park (decorated with colorful string “surprise sculptures” made by local kids) is followed by a pop-in tour of the historic St. Mane Theatre and, finally, the Lanesboro Arts Gallery, which showcases the work of talented local artists.

Adam, program director of Lanesboro Arts, a multidisciplinary arts organization engaged in community development, is clearly proud of the prominent role that art plays in Lanesboro, and is thrilled to talk about the community’s local arts program and his role in shaping it. 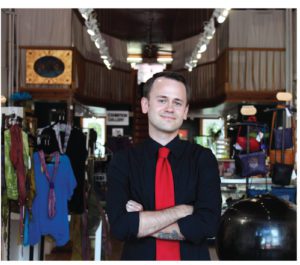 “I always wanted to work in public and community-based art and make an impact on the culture of a town, to use the arts as a way to bring people together and build community,” says Adam during a brief stop at his neatly organized office above the gallery. “And as a Southeast Minnesota native, Lanesboro has always been on my radar.”

It just took a while for him to find his way back to the area. After earning a bachelor’s degree in music business and entrepreneurship at St. Mary’s University of Minnesota in 2008, Adam held a variety of arts-related positions. Stints as station manager at 89.1 KPVL out of Postville and Decorah, Iowa, and store manager of the Winona Mister Groovys store were followed by a few other positions, including box office manager and then assistant managing director at his alma mater’s Performance Center. In June 2015 – on the day of the organization’s popular Art in the Park festival, no less – Adam joined the staff of Lanesboro Arts.

“What excites and energizes me about my job is the community engagement,” he says. “Each day I have many opportunities to work with business owners and other community members to improve our community. Collaboration is essential in a small town, and honestly that’s where the real fun lies as well.”

The Smithsonian’s acclaimed Water/Ways traveling exhibit, displayed in Lanesboro last winter, exemplifies the collaborative effort that has put (and kept) Lanesboro on the map regionally and nationally. The town was one of only six across Minnesota picked for the exhibit, and, with a population of 750, it was by far the smallest. “When you work on something so long, it’s almost magical to see it actually happen,” says Adam, who, as project lead, collaborated with numerous nonprofits to bring the exhibit to town. “That project was very impactful for Lanesboro – in addition to bringing the town lots of attention, it created a platform to have a sustained dialog on water issues.

In 2016 Adam was awarded a fellowship from the McKnight Foundation to travel to Austria for the Salzburg Global Forum for Young Cultural Innovators. There he met dozens of other young arts leaders, all of whom shared their successes and challenges in using art and culture to move communities forward. He came away from the weeklong event both energized and optimistic about Lanesboro’s collaborative, asset-based approach to community building.

“From our ongoing artist residency program to the new community mural on the back of the St. Mane Theatre, the arts contribute greatly to the vitality of this place,” says Adam. “I feel really good about the future of this organization and this town, and that’s a great feeling to have.” 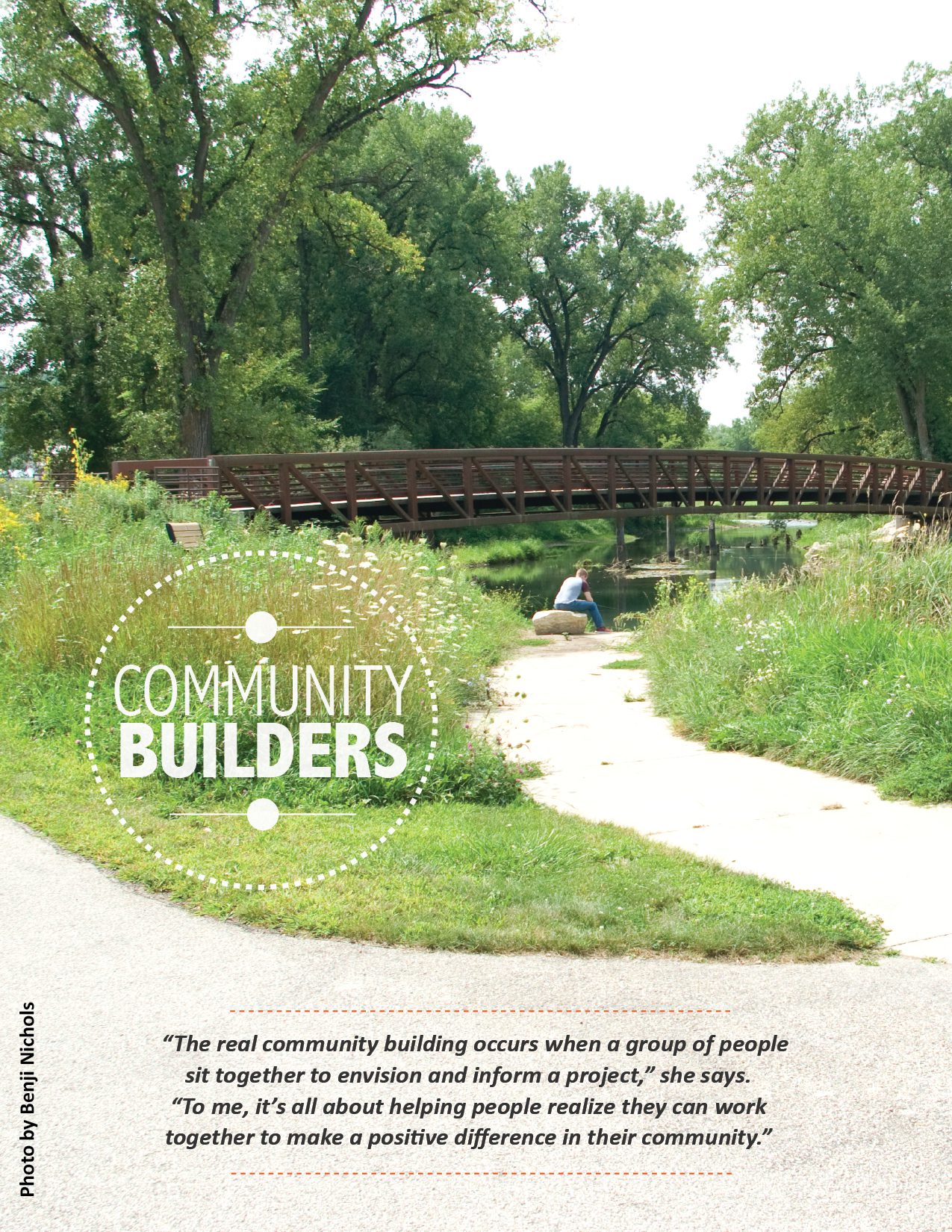