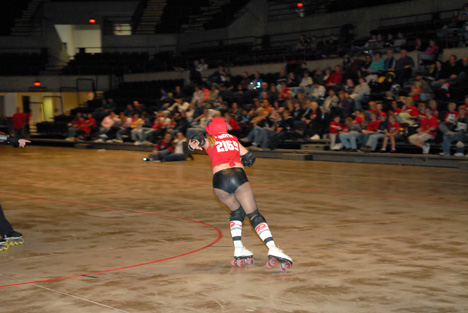 By day she’s the housewife. The attorney. The writer, the stylist, the chef. She moves with confidence, a fresh bruise merely a reminder of her latest battle, and like a rogue superhero, she can’t wait to pull on her fishnets and hot pants, slap on some red lipstick and get back in the rink to kick some derby ass. It’s just the way she rolls.

In a post-feminist era where romance is no longer a dirty word, but yes, the lady still just might want to mow the lawn, roller derby seems a natural fit. It rides a line between burlesque and brawn: the girls are sexy AND tough. They come together from all kinds of backgrounds and in all kinds of packages, united by their love of all things derby. Or they just like beating the crap out of each other while on old school quad skates. Either way, it’s not exactly your grandmother’s roller race.

Inducted in the 1930s by Chicago businessman Leo Seltzer, roller derby experienced a series of highs, lows, and evolutions over the decades until the 60s and 70s when the spectacle of it took precedent over the sport. Roller derby’s popularity fizzled out. Revival efforts didn’t take until 2001 when a group of Texas women pulled it out of its grave and gave it a whole new look.

The game goes like this: Two teams of five players are on the track, each with one jammer (she has a star on her helmet and is the one who scores) and four blockers (the blocker with a stripe on her helmet, the pivot, leads her blockers). For every opponent the jammer passes, her team scores a point. But short of throwing elbows or making human clotheslines, these girls are doing everything they can to keep the opposing jammer back and get their jammer through.

“One of the reasons roller derby is so popular is because of the explosive, fantastic combination of sport, entertainment, female aggression, and (dare I say it?) sex appeal,” says Decorah native Regan (Johnson) Jacobsen. “Let me be explicit – this is a real, full-contact sport.”

Jacobsen, aka Tammy Faye Undertakker or more often, TFU (a tribute to Ms. Tammy Faye Bakker, the late overly-made up televangelist), lives in Madison and has been skating with the Mad Rollin’ Dolls going on four years. For her, all it took was one bout. She wanted in.

“The second I walked in the door I was hooked. I just KNEW I had to do this,” she says. “I didn’t for a second consider the time, the money, the injuries, or the fact that the closest thing I ever played to a sport was marching band.”

The Mad Rollin’ Dolls (MRD), kicking off their sixth season the end of January 2010, were Midwestern pioneers of the sport alongside other leagues like the Minnesota Roller Girls (MNRG). Leagues like these frequently have thousands of people come to see them skate (at a recent MNRG bout, they had nearly 4,000 attendees!), but it definitely took a lot of work getting there. And as with most things, being a pioneer has its pros and cons.

Zara Danz, aka Candi Pain (“I picked my name because it seemed sweet and bad ass. The play on words thing is pretty big with derby names. Also I really like candy!”), has been with the Minneapolis-based Minnesota Roller Girls since day one. She says being one of the first Midwestern teams had some physical perks.

“I decided I wanted to be the one hitting the hardest, not the one getting knocked over. That motivated me,” Danz says. “I was lucky though, because at the point I started it was new to all of us. We were the first league to bring derby to Minnesota. Now when rookies start, they get pounded by seasoned vets.”

Jacobsen says MRD had to blaze a wide trail for leagues that would one day join the ranks.

“Madison didn’t have any blueprints, any mentors, or any limits. That’s been a challenge and also a great responsibility – to help the leagues that formed after us learn from our mistakes, improve on what we did right, and succeed where we have failed,” she says.

According to Jacobsen, everybody has a “fresh meat” story – “I was scared as hell when I started. The first time I went to a practice with ‘veteran’ skaters flying by me on the track on all sides, their wheels clacking up against my wheels… it was terrifying” – but teammates work hard to train new players.

Closer to home, smaller cities like La Crosse are founding their own leagues. The La Crosse Skating Sirens, not even one year old yet, look to teams like MRD and MNRG for guidance and advice. Because starting a roller derby league isn’t easy: it’s a business. You need organization, recruits, money. Skating Sirens founder and president Melissa Larivee, aka Skin Kitty, is proud of how far they’ve come in just a few short months. They have great sponsors (“The people who back us, back us.”), skate all their home bouts at a great venue – the La Crosse Center – they have enough members for two teams on their league, and they’re improving on the track.

“We got our asses kicked at our first bout,” Larivee says. “But we’re getting better. We’re losing by less now.”

At the interview, Larivee’s left wrist is in a cast, and her nose is healing nicely after a dirty bout punch, she says.

“No, I’m just aggressive,” Larivee retorts. The two agree they are complete opposites, but because of derby, they’re best friends.

“It’s all about the comraderie,” Larivee says. “We want women to have a place to go to be athletic and skate. Women can dominate this sport. It does take a certain kind of woman, you just don’t know who that is exactly. There isn’t a stereotype for it. You can have your basketball star and your Goth out there on the track together. But I think it’s popular because it’s all women – the guys are in the minority.”

So the fact that men’s leagues are starting to form across the nation naturally raises the derby dander a bit. Jacobsen explains.

“When I first heard about men’s derby leagues popping up, I was upset. I felt, “Can’t we just have one thing!?” because women have traditionally been so excluded from sports; and women’s sports and women athletes are not given the same clout or attention as men’s sports and male athletes. I was afraid men’s roller derby would surpass women’s derby in popularity and co-opt all the hard work derby leagues have done to popularize the sport and bring it into the mainstream.”

She continues, “But, then I saw men playing roller derby… let’s just say my fears were waylayed. It’s an entirely different animal than all-female derby. And also, derby is fun. I don’t want to discourage anyone from having fun, working out, and participating in a community. Seriously, though, have you ever seen a six-foot tall man with hairy legs in hot pants? Yikes.”

Beside men, the derby leagues all have their rivals. For Danz, it’s the Mad Rollin’ Dolls.

“As far as our Allstar traveling team, our biggest rivals would be Madison,” Danz says. “Madison has an amazing league! We have a fantastic fun-loving border battle with them.”

MNRG has four home teams that play each other, and Danz is the captain of the Dagger Dolls. “I think this year we’ll be the force to be reckoned with. We have some amazing rookies and killer vets!”

MRD has six teams in their league, and Jacobsen skates for the Unholy Rollers. She’s her own biggest rival (“I am constantly trying to improve my game”), followed by MRD’s Reservoir Dolls. (“There is no team I enjoy beating more than the Res Dolls.”)

The Skating Sirens are still figuring out their opponents. “We don’t have any real rivals yet,” Arttus says. “Although we’ve played some pretty dirty skaters, most everyone is having fun.”

Fun is the emphasis for skaters and attendees at derby bouts.

“Everyone goes to see derby,” Danz says. “There are bands, games, giveaways, food and delicious PBR! I think there is a serious cool and fun factor that nothing else out there has. I could go on and on. Roller derby fever is contagious!”

Perhaps it’s the short skirts and stockings. The racy names. Or the motley crew that is the roller derby norm. But it truly does seem to kick ass.

“Derby is like the Island of Misfit Toys for grown-ups,” Jacobsen says. “We’re all a little nutty, injured, socially inept, what have you, but we came together because no one else would accept us or no one else was doing what appealed to us. We accept each other for better or for worse, and together we make something phenomenal.”

Aryn Henning Nichols thinks it would be amazing to start a Decorah derby league. I mean, WTFDA rhymes with UFFDA…can you think of a better sign? Now…to find the time…