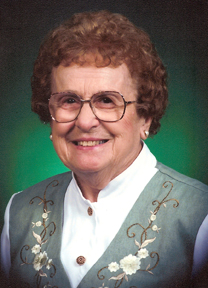 Honesty. Don’t speak badly about others, and never say a “bad” word!

What did you want to be when you grew up?
After I graduated the eighth grade I lived with my parents until I was married. Both my parents passed away just a few years after that – I really just wanted to get married and raise a family of my own.

What are you most proud of in your life?
I’m a proud mother of 13 children – and all the grand and great-grand kids. I’m also a life long member of St. John’s Catholic Church in Ft. Atkinson.

What do/did you do?
We farmed – milked cows by hand for many years, gathered and sold eggs, raised and butchered chickens, gardened and canned vegetables, and sold raspberries and strawberries. I also sowed a lot, including clothing, bridesmaid dresses, etc. In more recent years I have crocheted baby caps – more than 50 – both for my grand kids and for others.

Try to describe yourself in one sentence.
A great bread maker.

If you could eat anything everyday for the rest of your life, what would it be?
Anything rhubarb! Baking powder biscuits with rhubarb sauce, just like my mom used to make.

Multiple Choice: tell us about…. Your wedding day…
I was married on September 10, 1940 to Leo Hackman. We lived just a couple miles from each other and knew each other quite a while, although we went to different parishes. It was just sort of a given that we would get married. I don’t even really remember thinking about it. We were married early in the morning, and then all the neighbors and relatives came for dinner on the farm and stayed until supper. 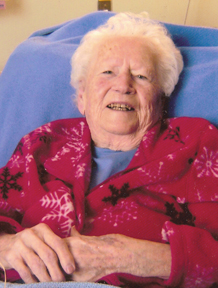 What’s the best advice anyone every gave you?
“Don’t be afraid to give a little more than 100%.”  This is the advice Regina told her own children. 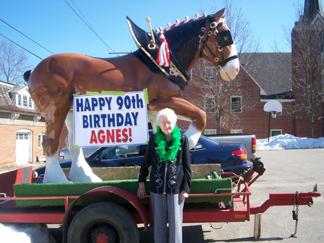