Gale Ludeking, 84, is an army veteran with a lot of great tales and a great memory to store them!

I volunteer to drive the VA van to Iowa City and back on a fairly regular basis, and I meet and talk to a lot of wonderful veterans in the process. So when my daughter, Aryn, asked if I wanted to interview one of them for Inspire(d), I said, “Yes, I’d love to.” I was impressed with Gale – he has a very good memory and is interesting to talk to. He seems like a content guy, and has a lot of good life stories that he’ll talk to you about if you ask.

What the best advice anyone ever gave you? 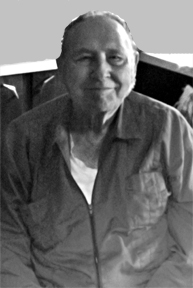 What did you want to be when you grew up?
I wanted to be a good farmer/cattle man.

What did you do?
I was born in Waukon and was raised on a farm in the Frankville area until 1943, when I joined the army. I had basic training at Camp Dodge in Des Moines and after was sent to the Philippines. Later I was a part of the Occupational Forces of Japan. When I returned home in 1946, I became a buyer for Oscar Meyer Meat Packing in Viola, Wisconsin. They wanted me to move to Illinois, but my wife didn’t want to, so I began working for Fairbanks Morris building locomotives until 1954, when I bought a farm in Iowa. I raised tobacco and milked – after a fire in 1964, I switched to tobacco and sheep, then started also selling Mormon’s Feed, and finally I went full-time raising beef, hogs, and grain. I retired in 1992 and moved back to Waukon.

What meant the most to you as a veteran?
I helped save the country in a time of need, and am now a lifetime member of the VFW. We were welcomed home as heroes.

What was the worst thing about being a veteran?
Losing friends and seeing what you see.

If you were stranded on a desert island, what three things would you want with you?
Water, food, and books.

Try to describe yourself in one sentence.
Happy and content with what I have.

If you could eat anything every day for the rest of your life, what would it be?
Good fish.

Name one thing you could not live without.
A warm house.

Tell us about…your wedding day.
We had been going together for quite awhile, so we decided to get married over a long weekend. We couldn’t get married in the church because it was such short notice.

I married Helen over the Christmas holiday vacation in 1948  – it was New Year’s Eve and a long weekend and they were visiting their families. Our parents came and we got married at East Salem Church Parsonage with a small party at my parents’ house, then we went back to Wisconsin to live. (the same church Ron’s parents and grandparents attended).

Tell us about…your favorite memory.
When I was about 7 or 8 years old, my grandpa gave me a pony – which was a pretty big deal for someone my age to get. It was an older horse, but I just really loved to ride it!