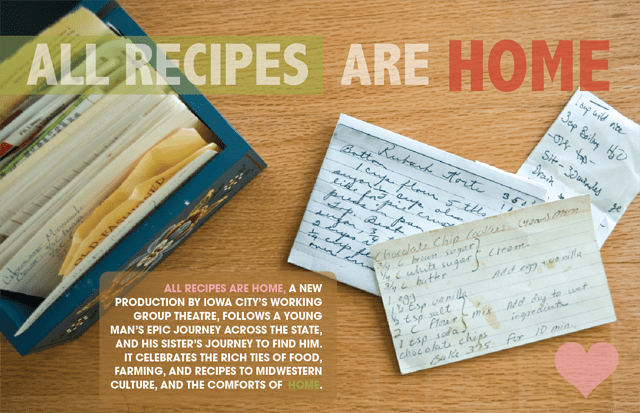 By Benji Nichols • Above photo by Aryn Henning Nichols

Recipes are – in theory ­­– mathematical equations. But in reality, each recipe – tucked in an old box or church cookbook, scribbled to the edges with notes and names – is a story, sometimes handed down from generation to generation, place to place, family to family. Just a whiff of a favorite dish can transport you to another time and place. Home. 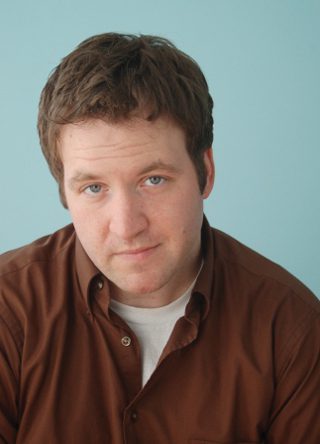 “Irish Stew,” says Sean Lewis, writer and director of ‘All Recipes are Home.’ “It’s the meal I remember smelling in my grandmother’s house whenever we would visit her.”

But as anyone who has tried to recreate a dish “just like grandma” knows, a recipe will only get you part way there.

“At its simplest a recipe is just measurements and ingredients, but at its best it is like a potion,” says Lewis. “Mundane things that when put together remind of us of who we are and where we came from.” (Photo at right courtesy Sean Lewis.)

Commissioned by Luther College, The University of Iowa, and Grinnell College, “All Recipes Are Home” is a new theatrical piece by Iowa City’s Working Group Theatre. Following a young man’s epic journey across the state, and his sister’s journey to find him, a beautiful story is woven through words and music, including new songs from Iowa City’s own Awful Purdies. The work explores and celebrates the rich ties of food, farming, and recipes to Midwestern culture, and the comforts of “Home.”

“This is our fourth major play in Iowa,” says Lewis, the lead of Working Group Theatre. Founded in 2009 by three MFA graduates from the University of Iowa, Working Group has created more than 30 new plays and theatrical works, many centered around timely social issues. “We have done some heavy material in the past including race and class, the support for caregivers of loved ones suffering from Alzheimer’s, cyber bullying, etc. It was clear after coming to Decorah and meeting farmers across the state that this piece would need to be different. This show needed to be joyful. A celebration. We really wanted to make a show that collected this identifying quality of the state, this ‘look at how we are brought together despite our differences.’”

Lewis, an award winning director, actor, and playwright in his own right (including being heard as a commentator on NPR’s This American Life), visited Northeast Iowa extensively in preparation for the production. 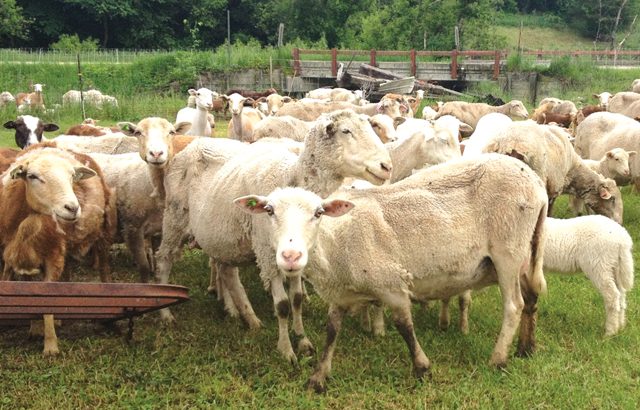 “The local commitment to food is amazing,” he says. “Young people deciding to come back to the farm and living from the land juxtaposed with children leaving the family farm, the shared interests and concerns of farmers who are neighbors but also their differences regarding the type of farm; family vs. commercial; organic vs. non. I loved how excited people were with their work. No one is in farming for the easy money. But there is a true honor in growing something and nurturing it – a joy in providing for others.” 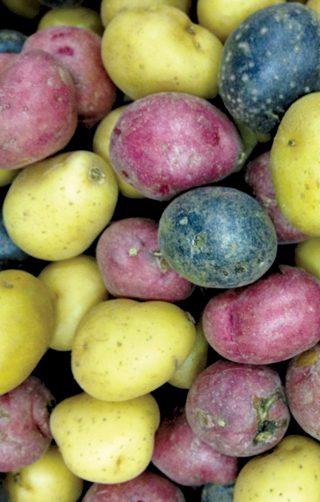 “I loved working in the Decorah Middle School cafeteria,” said Lewis. “The food they provide local and fresh prepared is worlds removed from my cafeteria experience. We served purple French fries that day – I served them – and never felt less popular in a middle school!” (Photo at right courtesy Luther College.)

Iowa City-based folk band Awful Purdies also collected stories from around the state and visited Decorah in in preparation for the production. 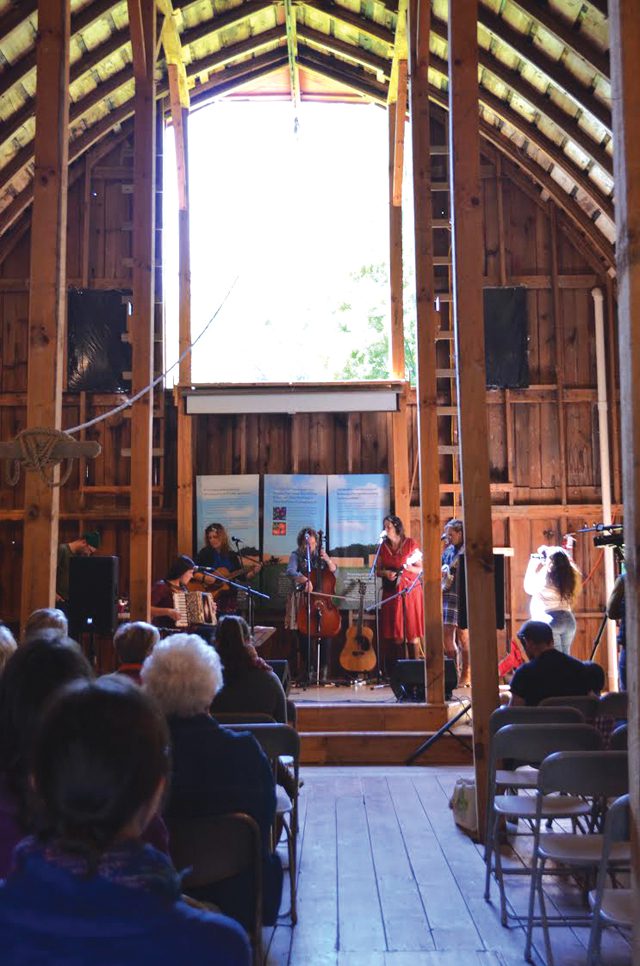 “At first the idea of writing songs about food seemed completely lacking in sexiness,” says Katie Roche, the official accordion, xylophone, penny whistle, recorder, and washboard player for the group. “But now that we are deep in this subject, the band has realized that it is dripping with politics, love stories, empowerment, and complete loss.”

They performed at Seed Saver’s Exchange Heritage Farm during their stay in Northeast Iowa, and held story circles to collect personal experiences for the project.

“We could have easily continued to listen through that gourd labeled food and wrote nothing but food songs for the rest of our lives,” says Roche, “Because lyrically, food is really about survival and quality of life. That subject is a ten layer cake.”

Benji Nichols has long believed that recipes are merely rough guides to follow. Much as in life, the monumental failures and successes are often found by deviation – but finding them again is the real magic!

All Recipes are Home premiers as the final show of the 2014-15 Center Stage Series in Decorah on April 11, with additional performances at Grinnell College April 13, and the University of Iowa / Hancher on April 17-18.

Find out more at:

The new Awful Purdies album, also entitled “All Recipes Are Home” is available for pre-order now on Maximum Ames Records with a delivery date of Summer 2015. The “physical” album will actually be sent as a packet of Seed Saver’s vegetable Seeds with a download card – plant and play, and eat your way through the summer!
www.awfulpurdies.com
www.maximumamesrecords.com 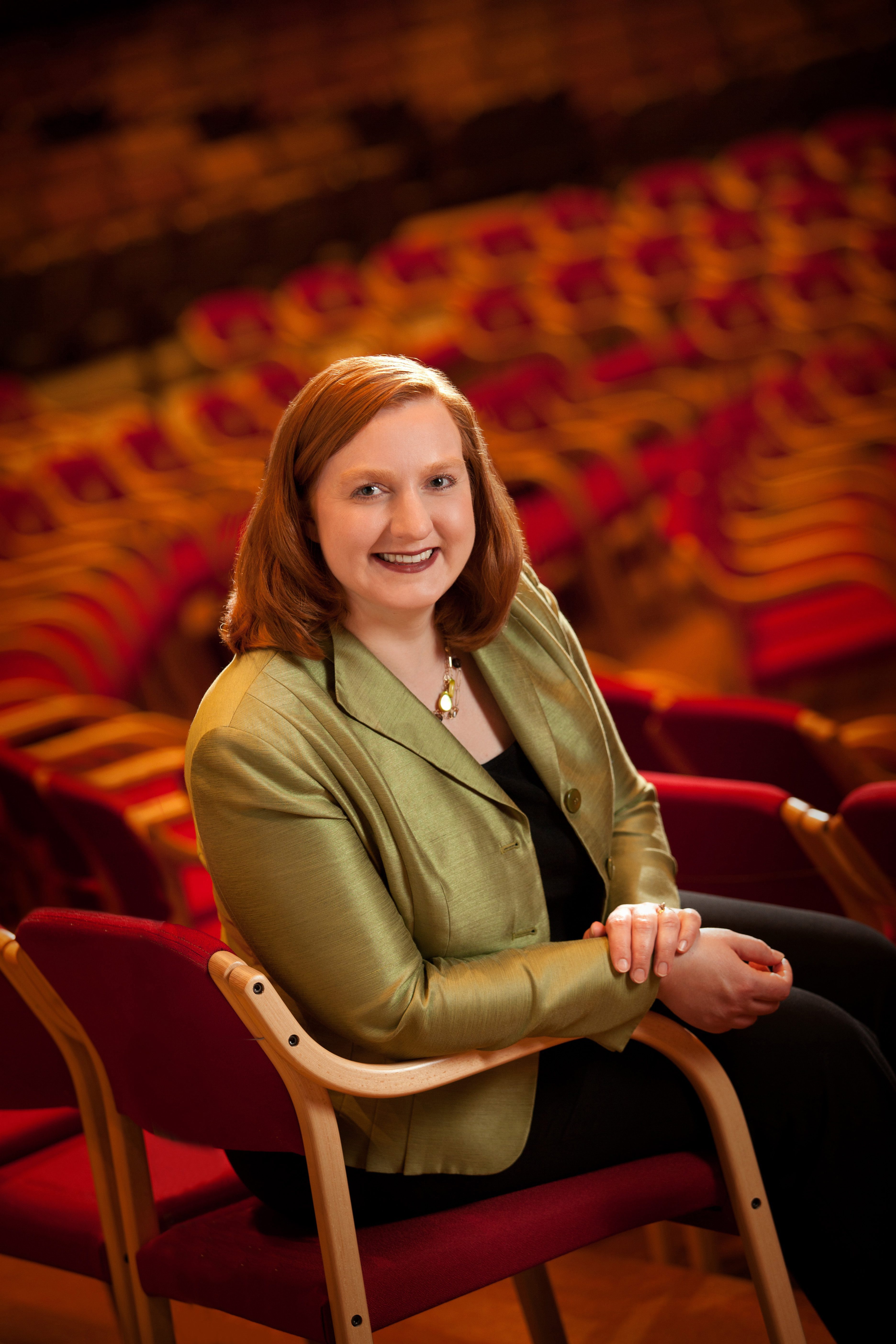 This is the first of the 5 part series, Making a Scene – from our fall 2014 magazine.
Written/Interviews by Benji Nichols 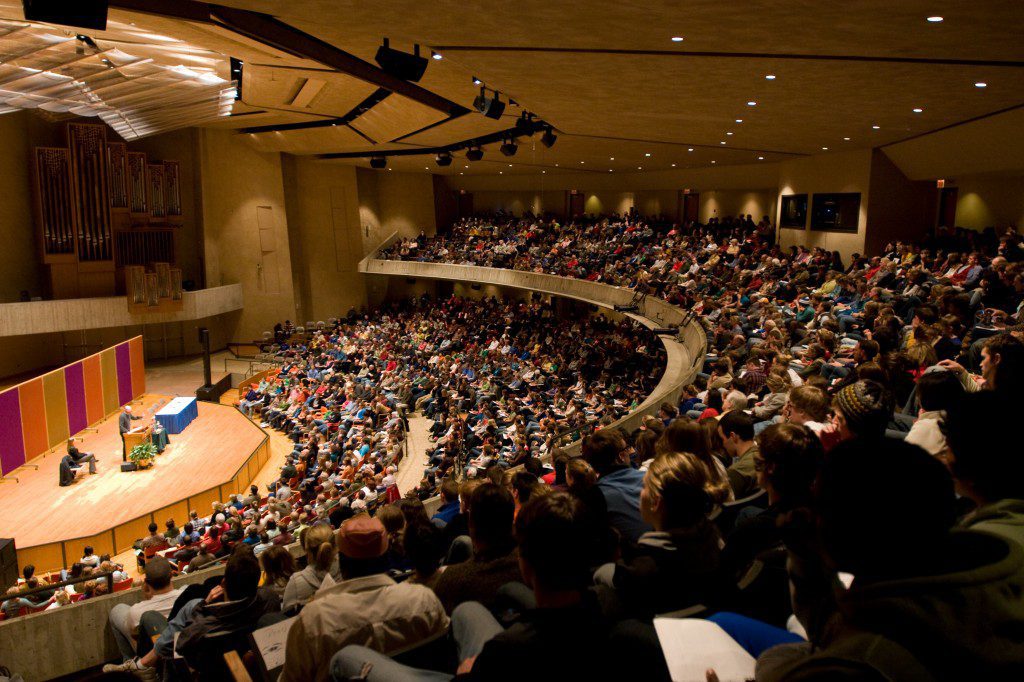 We all know how great seeing a live performance can be, whether at a regional performing arts center, or your neighborhood tavern, but we don’t always think about the countless folks literally behind the scene, making those moments happen. Of course there are the performers, their support crew, audio and lighting techs, publicity folks, bartenders, door staff, and so many others. But what about the people who are at the helm of deciding who and what shows to bring to our region?

Inspire(d) caught up with five different leaders in the Driftless Region who are making amazing performances happen. From fine art, to rockabilly queens, to alcohol free rock and roll, and the Blues, these are the people who truly make it happen. Hats off to these fine folks and the amazing people that work with them to “make a scene” – say thanks the next time you see them (just look for the wizard behind the curtain – or more likely running around making it all happen!). Better yet, buy a ticket and go see the shows! 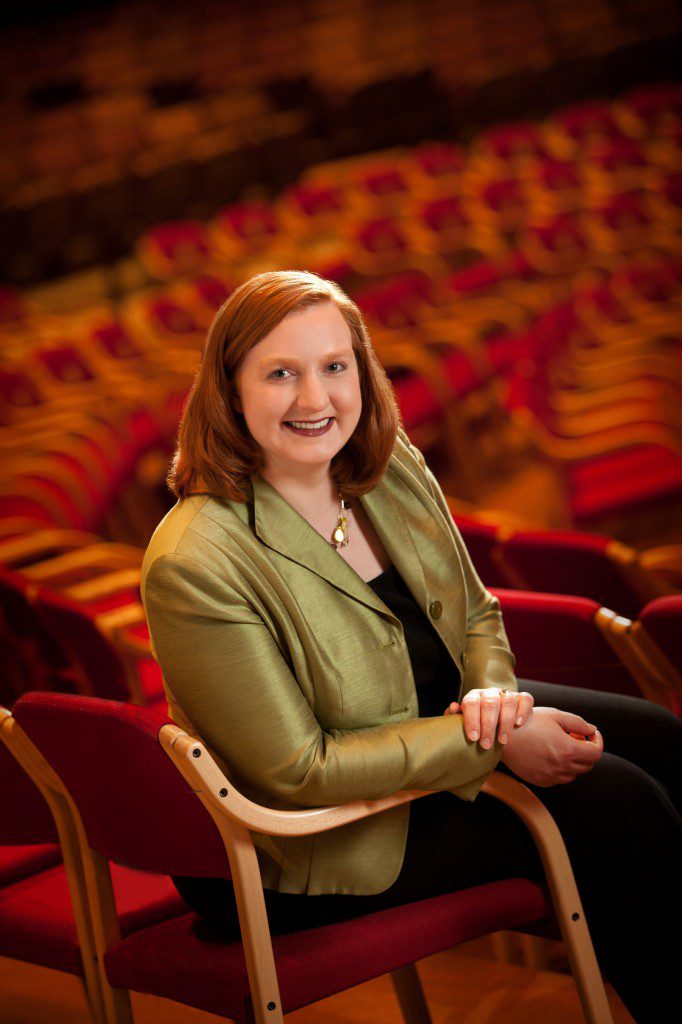 The Luther College Center Stage Series has anchored the touring performing arts in Northeast Iowa for decades. Since 2005, Tanya Gertz has been the Director of Campus Programming, rounding up staff to juggle hundreds of events moving through various spaces each year. The 2014-15 Center Stage Series kicks off September 13 with The Intergalactic Nemesis, and continues September 25 with the tap-sensation Rhythmic Circus. San Jose Taiko brings the beat October 4, and LA Theatre Works presents “In the Heat of the Night” October 24. A special primer concert with The Awful Purdies focusing on local food and farming will take place Sunday September 14 at Seed Savers exchange – the discussion after this show will be part of a theatrical production from the Working Group Theatre on the Center Stage Series this coming Spring entitled “All Recipes Are Home (April 11, 2015). There’s way more fun, Center Stage Series show info, and online tickets at: tickets.luther.edu

I have been presenting events in this big, whole-hearted way since I started at Luther. However, looking back, I should have seen the possibility long ago as I was often in leadership roles for special events at my high school and college. When I had very few funds in Chicago, I saw everything I could that was free and then all the theatre I could by volunteering anywhere that would take me!

A few years back, the dance company Diavolo was at Luther. They had this big ship-like set element and there was a moment a dancer intentionally flew off it and the entire audience gasped. It was pretty wonderful to experience that as a presenter – helping to create such a dramatic moment that everyone was connected.

Oh, this question! I care first and foremost about the experience and gifts of each artist to our series. But if I had to choose, it would probably be some kind special gathering of great artists like Dolly Parton, Joshua Bell, Aretha Franklin, Martha Graham, and some young inspiring folks with them like Abigail Washburn and/or Time for Three (who have been here)! And, then once we’ve all had our hearts filled to the brim with great art and our faces lit up with joy, they would come out and greet the great people in our audience!

I am in love with the new series and the energy of it! I am very excited to have San Jose Taiko here and 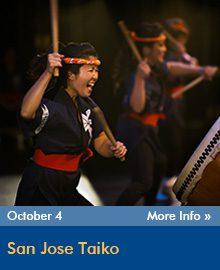 offer not only the evening performance, but also a show for our local schools and multiple workshops in town and on campus. I love that they are the longest-running taiko group in the US, and that the artistic director is a woman. And, though it is next spring – I am unbelievably excited about our premiere of All Recipes Are Home… grown from the stories of the land, food, and farming in Iowa with the setting being at a Decorah family farm.