Intro and interview by granddaughter, Lisa Tupy
Originally published in the July/August 2008 Inspire(d)

The first memory I have of my grandpa is me sitting on his lap, in amazement, as he told me tall tales of how Pocahontas was his girlfriend, before he met Grandma of course! Still, even now, I can always count on my grandpa to make me laugh. I can sit and goof around with him like I would with my closest friends. He’s battled so many health issues and still he refuses to give into the bitterness of growing older. He continues to posses the spirit and determination of an adolescent!
(Photo below of Lensing with granddaughter, Lisa Tupy) 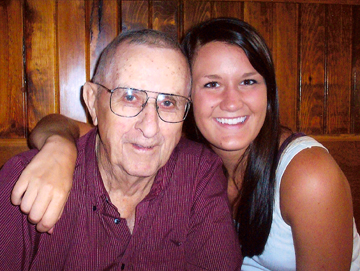 Best Advice?
Watch your spending. Save your money.

What did you want to be when you grew up?
I always knew I would be a farmer. I really just went on what fate handed me.

What do/did you do?
I was a Farmer. We raised crops, hogs, and had a dairy farm. After I graduated High School in 1946 I went to school in Omaha for a year for electronics. Then I was drafted into the Army for 2 years. I went through 16 weeks of infantry training and then another 8 weeks of advanced infantry school. I took air-born training for three weeks then was stationed with the 82nd air-born division in Fort, Bragg NC.

If you were stranded on a desert island what three things would you want with you?
Water, food, and a sweet red-head! – my wife Arlene haha

If you could eat anything everyday for the rest of your life, what would it be?
Date Pudding

Name one thing you could not live without?
It used to be fishing… some of my favorite memories are from trips to Northern Minnesota and Canada to fish. But now it would be the time that I get to spend and laugh with my grandkids

Mulitiple Choice…Wedding Day:
We got married at 8:30 in the morning! It had been a nice fall until that day and it was cold, rainy, and even snowed a little. It was October 6, 1953. We served dinner and supper then we had beer, whiskey, and pop for our guests. That night we had a dance at the Inwood with a country music band.

Tell us a little bit about your family life…
After the army, I came back to Northeast Iowa and Married my red-head sweetheart Arlene. We raised ten children together—6 girls and 4 boys. And we found out the girls were easier to raise than the boys! Both my wife Arlene and I came from a family of 10 so we couldn’t stop till we hit that magic number! I could write a book on all the crazy and funny things the kids have tried to get away with growing up!

What are some hardships you’ve faced in your life?
The worst thing that I ever happened to me was having open-heart surgery a couple weeks ago. They replaced my aorta valve. It’s been a hard time to overcome and recover. About 4 years ago I became one of the first people to use a stimulator for chest pain.

I went to school in Festina as a kid. In second grade my whole family came down with Scarlet Fever. We had to bring a nurse into the house to take care of us all. I will always remember how scary it was since I was just a little kid.

Bev Christen is one of those people – always so pleasantly positive, making your day by just saying hi. You can’t help but love her the instant you meet.

HAPPY BIRTHDAY (6/20/16) TO SYLVESTER! Interview by Joanie Rollins (daughter of Sylvester) and Benji Nichols. Sylvester Carolan, age 105, claims his faith, his family, a…