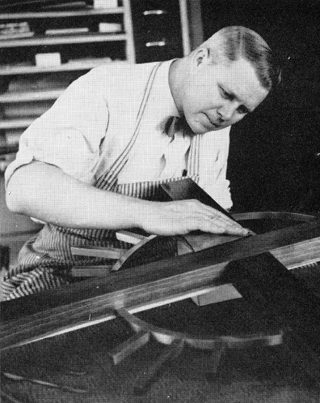 An Inspire(d) Probituary in honor of Orville Magnus Running, the great artist, mentor, role model, educator, and spiritual leader as he entered his 99th year (in 2012). Running’s artwork has been shown across the world and can frequently be seen throughout the Luther College Campus and in private collections across the upper Midwest. He spent his last days at the Aase Haugen home in Decorah.

What is the best advice anyone ever gave you?
One day, young Orville wasn’t getting his way so he threw a tantrum. His father looked at him calmly and said: Orville is very angry and no one is afraid.

What did you want to be when you grew up?
Orville loved chemistry, thought he’d like to continue studying it— until he found out it was a disguised form of math.

What do/did you do?
“Most of what I have done is based on what I learned in 8th grade shop.” He loved mechanical drawing; he discovered the wonders of India ink. He learned respect for tools and materials. He drew the plans for a printing press; Decorah machinist Mr. Karnik fabricated it following those plans. He also spent summers building silos – his crew could build a silo in one week.

If you were stranded on a desert island, what three things would you want with you?
Work gloves, cap, shop apron. Or perhaps a sketchbook, pencil, pocketknife ­– always carried one – it also functioned as a letter opener. Luther’s Catechisms, the Bible, and the old ELC Black Hymnary, although most of those were well memorized.

Try to describe yourself in one sentence.
Old Crock!

If you could eat anything every day for the rest of your life, what would it be?
Spam.

Second marriage to Mildred Lund. The reception was in the big dining room at Mildred’s Retirement residence. The caterer especially enjoyed the events because she usually prepared nice receptions for funerals.

Interviewed by daughter-in-law Lynne Zotalis. It’s so interesting how things come around. I will have two new grandchildren by spring.  Their great grandma, Virginia, will…