Jim Schaffer, born July 14, 1934 on the family farm in Iowa, on what was one of the hottest days of that century. Interviewed by friend Gayle  Nielsen

Some people are just so interesting that you NEED to let others know. Jim Schaffer is one of those people. We first met Jim and his wife, Judy, when they became our neighbors, moving into the house across the road from us from when their son, Ed and his wife Vickie moved to the next house down the road. It was so nice being included in the family gatherings and getting to know everyone.

One of the things that people notice about Jim is that he never stops learning. Even after retiring from iron working, he continued making iron yard and garden sculptures and even an iron spiral staircase at the house. It looked like a pirate lookout. He taught himself to paint and to make guitars. He just keeps getting better and better and learning new things. Jim is one of the most real and kind folks out there. It was a sad day for us when Jim and Judy moved away, and even sadder when Judy passed last year, but it’s nice to stay connected through family and through music. 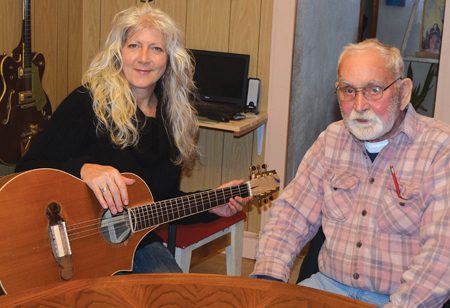 Interviewer Gayle with Jim and her new guitar.

I think I heard it from real estate folks… “get a lot while you’re young”.

My advice to myself. I made a lot of bad decisions, but never anything with my family. I learned from my mistakes. I always did what I thought was “proper”. My family never heard foul language around the house even though I used it maybe 50 times a day around my fellow iron workers. I’m a product of the 1940s and I just don’t think cussing is proper (unless it’s in front of the cat).

I was initiated into the iron workers union in 1962, at 21 years old. That was young. We worked as high as 1100 feet in the air, and there was no safety gear in those days. We iron workers were “the elite” then. I thought I could whip Ali (Muhammad Ali). I retired in 1996. Now I paint, especially portraits and play and build guitars.

I have the ability to laugh at myself.

Music. I started making guitars because I wanted a 7-string guitar for myself, so I started with a classical guitar and lumber from the lumberyard to make it. Then made the next one, out of rosewood, for my son Jimmy, and now I’m making guitars for disabled veterans and custom guitars for other musicians. I’m booked for the next year with orders. 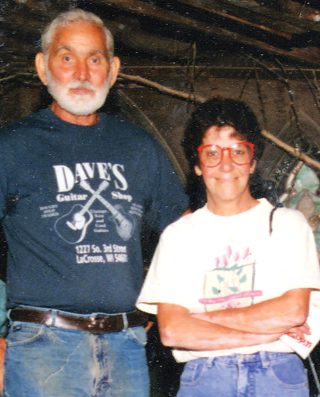 Jim with his late wife, Judy.

Tell us about your wedding day or your favorite memory.

My favorite memory is my wedding day. I married Judy, in a church, in 1955. I never really dated anyone else. That pastor didn’t want to marry us because we were too young; she was 17 and I was 21. Well, I spent 61 years with her and we never even had a violent argument. I remember my dad giving us a toaster as a wedding present. Back then, we didn’t have big, expensive weddings and the gifts were something we could use.
Every guitar I make now has a hand painting of a bluebird, from Judy’s china pattern, in her memory. Everyone who gets one of my guitars get a painting of a bluebird on it somewhere.