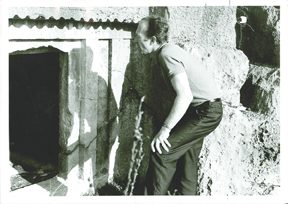 Dr. Richard Simon Hanson grew up in rural Wisconsin with a love of farm life that has led a journey of learning, teaching, and sharing. He was ordained, received his Ph.D. from Harvard University, and is a Professor Emeritus of Religion at Luther College where he taught for almost 40 years. He and his wife, Rita, were married for over 55 years and had four children throughout their life’s adventures. A highly respected storyteller, Chaplin, caregiver, mentor, and educator, Richard Simon now spends many days a week volunteering and visiting with those giving and receiving skilled, nursing home, and hospice care. He was a member of the Dead Sea Scrolls archaeology and translation team, and was awarded the Carnegie Foundation ‘US Professor of the Year Award’ for Iowa in 1998. He is the author of several theological and related works, including his own translation of the Book of Psalms. Hanson is also featured in the eight-part DVD series “How the Bible Happened” which was hosted by the NE Iowa Unitarian Universal Fellowship.

I grew up on a farm in rural St. Croix County Wisconsin, and my father explained things very well, so there was a lot of good advice. “Always tell the truth,” although… At least I started off with good advice! My father also always said, “When opportunity comes, then maybe it’s time to jump.” That suited me well through the years.

How about the worst advice?

Oh, you know, you do and don’t follow advice.

Because farming was so much fun, I was going to be a farmer – what a life! But it didn’t occur to me until I was a bit older that our 72-acre farm would barely support a family. At 16 or 17 I thought, “No, I love to learn.”

I had taken to Latin on my own, and was interested in music, which I majored in at Luther College, with minors in German and Greek. I loved directing choirs and led many throughout my years, including the Schola Cantorum my senior year while Weston Noble was directing the Nordic Choir. And I wanted to keep learning, so I went to Luther Seminary in St. Paul, learned and taught Hebrew – much of it on my own, got my masters, and then had the opportunity to continue my doctoral studies at Harvard. The Dead Sea Scrolls had just been found and it was a very exciting time. In the time shortly after WWII there were not as many doctoral degrees, and we had the opportunity to look at moving to Indonesia, Israel, and other locations with our children – and there was also an option at Luther, which we took, partially due to the proximity of our families, and our own growing family.

Oatmeal. It’s very balanced – and growing up on a farm, you learn it has the highest protein among the grains.

Water. It is profoundly important.

Multiple choice: tell us about… Your wedding / engagement day!

I got through Luther College – too poor to date. In Minneapolis though, there was a nurse that I met who invited me to dinner with her three roommates. She had a fabulous chicken dinner which I thought she had cooked, and then I found out it was actually her roommate, Rita, that had cooked it. I was smitten. We dated a bit, and then I had a summer job in Thief River Falls. I spent all my money on an engagement ring. Really, I knew the church would have some leftovers, and I had a place to stay – I had very little money. Outside of Elk River there was a pretty spot above a lake that I had found and it was there that I asked Rita to marry me. We were so excited. I figured I would finish seminary and we’d get married in a year or two, but Rita’s mother and friends had other ideas – she was also three years older than me! A completely homemade wedding happened on September 2, 1954. We spent the morning picking flowers and ferns for the ceremony, and Rita had found a used wedding dress. When it got to ceremony time, I was almost panicked not knowing if I was ready, but I said ‘I do’. 50 years later, while Rita was at Aase Haugen with Parkinson’s, I decided we should re-do our vows. We brought down her dress and I read our vows out loud. It was quite special – and I said “Rita, this time I really do mean it!”

This is the man who officiated the Wedding of Krista Lynn Sandstrom and Xn Mag Uidhir. At Dunning’s Spring in Decorah, Iowa on October 2, 1993. The very first day of Classes I had at Luther College (1988). I met 3 people who had a positive impact on my life, Queen Williams, Sarah Peterson and Richard Simon Hanson.
I met Professor Hanson while looking for a pencil sharpener before my very first Paidea Class. So I walked until I saw an open office door, and saw mounted on the bookcase a Pencil Sharpener. I asked the office resident if I could borrow it. He invited me in (Long haired Iron Maiden t-shirt wearing 18 year old and all) and we talked a bit about Music, Philosophy and Linguistics, before I had to head to class. That was my first experience with Professor Hanson.
While I never took a course from him, I did serve as his student secretary in the Religion/Philosophy department from 1991-92. Most of that time was spent asking him questions regarding paleography, archeology, his work on the Dead Sea Scrolls, language and of course music. (and I got paid for learning from him 😉
Anyway, when it came time for Krista and Me to marry, we first thought of asking Professor Hanson to officiate. If he refused… well then we’d just go to the courthouse and have a quiet ceremony.