Interview and foreword by Karen Kerndt

I met Mary Henry in 1988 when I started working with Winneshiek County Public Health. She has been a wonderful co-worker and friend ever since. At the time I met Mary she was working as a home care aide, taking care of clients who were younger than her! The funny thing about this was that Mary had to have a physical signed by an MD every year to make sure she was in good enough health to work. She retired when she was 77. Since that time Mary has been very busy helping family, friends and her neighbors where she lives. Mary is now 92, still active, drives daily, cooks daily, and makes Sunday dinner for several of her neighbors in her apartment complex – every Sunday! 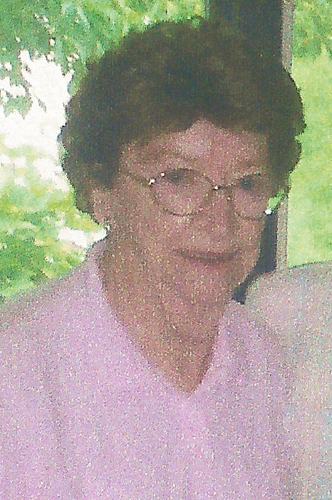 My mother told me when I married Jim, “You can’t come back.” Mary laughs and told me she knew she had to stick with him.

What did you want to be when you grew up?
A nurse

What did you do?
I was born on a farm near Jackson Junction and graduated from Waucoma high school in 1936. I married Jim Henry in 1938 and raised four children – two boys and two girls. I went back to school to be a nurse, a LPN in 1970, and worked at Aase Haugen and then Winneshiek Public Health until I retired in 1977. I still go out daily and to church three to four times per week. I enjoy helping others.

If you were stranded on a desert island, what three things would you want with you?
My family picture (with her husband and her four children), my Rosary, and of course my medicine! (Spoken like a true nurse).

Try to describe yourself in one sentence:
“Old,” she laughs, “but I have a good attitude and I’m happy!”

If you could eat anything everyday for the rest of your life, what would it be?
Goulash

Name one thing that you could not live without?
Money

Tell us about your wedding day:
“I wore a blue dress, my Aunt was my maid of honor and she wore a pink dress. We had flowers in our hair. We were married at St. Mary’s in Waucoma at 9 am by Father Falin. My mom served a brunch for about 30 people – close family and friends. That night we had a wedding dance at Breezy Corners and lots of people attended. Our honeymoon was in a motel in Waukon, we wanted to go to La Crosse but we were too tired to drive so we stayed there. We did spend a week in Wisconsin, but came back to this little hotel in La Crosse every night.

What is your favorite memory:
“I have so many,” but she does tell me, “When we picked up our four children (Mary and Jim adopted their four kids). I can still remember how happy we were and how glad we were to have them. We were only supposed to go and see them, and I always took them home the same day.”