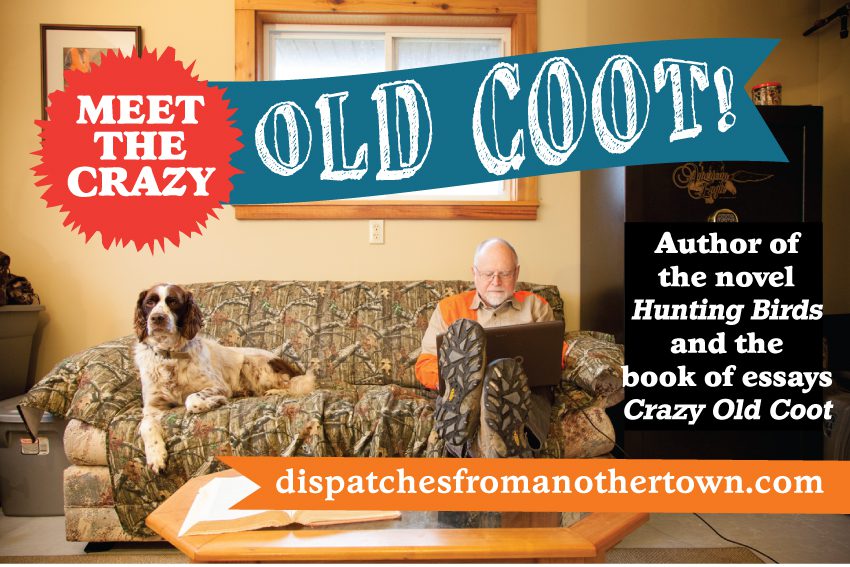 Said no one ever.

But we know a lot of people who have uttered the words, “I want to write a book.” Or even better, “I’m going to write a book!” So where do you start? Decorah’s Jerry Johnson – hunter, blogger, writer, and all-around witty wordsmith – suggests you start with the obvious: Words. You gotta get them on the page.

“Write,” he says, “Write every day. Write with passion.”

Jerry does just that, and with great discipline. His blog, dispatchesfromanotherntown.com, is home to numerous essays, musings, and a good smattering of dog and hunting photos (another passion).

Jerry has also self-published two books. His latest, Scrawny Dog, Hungry Cat, and Fat Rat: A Tragedy for Children (March, 2014) was written 45 years ago by his then college-aged self, just getting ready to take the writing world by storm. Happily, past Jerry would pat future Jerry on his back. Through his long writing career, Jerry has published numerous stories, editorials, essays, and columns for a variety of newspapers and press organizations. (Update! Jerry has now published a third book: Crazy Old Coot, a collection of essays about bird hunting, bird dogs, and bird guns, memoirs, social and political commentary, and other pieces of creative non-fiction, August 2014! You can buy his book and meet the Old Coot himself at Dragonfly Books – there is a reading this Saturday, December 6, from 2-3:30 pm.)

“But those were all a long time ago,” he says, “And of course, not creative writing.”

So for now, Jerry has settled back into the best – and probably worst – aspect of writing: the creative part. And that doesn’t always – or even often – lead to a book deal.

“Agents and publishers are not necessarily seeking good literature or even quality writing; they are seeking marketable writing,” he says. “If you write zombie or romance or mystery novels, you might be marketable. If you write for niche audiences, readers of outdoor sports literature for example, you may not be marketable.”

Along with a tendency for long titles – in addition to …Tragedy for Children, his first published book is titled Hunting Birds: The Lives and Legends of the Pine County Rod, Gun, Dog and Social Club – Jerry is apt to gear his work toward his life (hunting, dogs, old friends and good stories). He’s currently writing a collection of essays on outdoor sports, posting one or more to the blog each week in hopes of eventually compiling them for a book.

“I puttered around with a sequel to Hunting Birds, but I couldn’t get back into the character of Carter Preston, the story’s protagonist,” he says. “Some day an essay will take off and grow to 50,000 words and I’ll be on my way to a new novel.”

Jerry shares some advice he’s learned along the way – it won’t make it easy, but it sure as heck can’t hurt, write (groan…)? 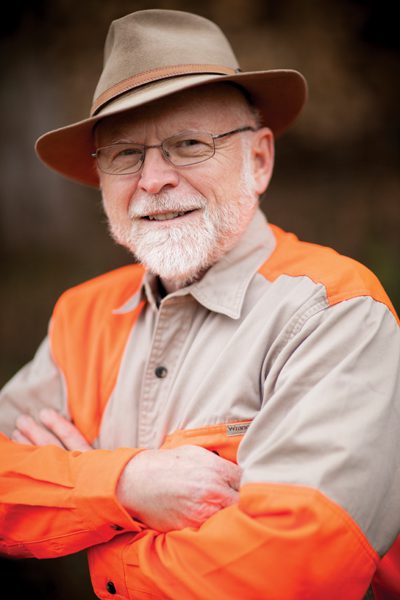 How long have you been a writer? At what point do you think it’s okay to call yourself “writer”?

Way back in the sixth grade, I was telling friends I would be a writer. I wrote a science fiction “novel” that year. I considered myself a true writer in August 1975 when my first published work, news and editorial and sports columns, rolled off the press of a weekly newspaper in Nebraska, where I was editor – and advertising rep and distribution manager and janitor. So I say you can call yourself a writer when you actually publish your work and someone reads it.

How do you go about finding a place to start publishing?

After much frustration dealing with publishing houses and agents, I followed the advice of a friend and e-published my novel “Hunting Birds” on Amazon.com. There are several e-publishing and POD (print on demand) services available online. My advice: Do some research and select the one that feels best for you.

Can you tell us more about how online publishing works?

I publish in three formats: Kindle books (Amazon); CreateSpace POD (print on demand) paperback books (also Amazon); and on my blog, “Dispatches from a Northern Town,” (dispatchesfromanotherntown.com). It costs little (blogs) to nothing (ebooks and POD books) to publish your work. I am a technology troglodyte, though, so it was still a challenge. Fortunately, some of my former Luther College students are professionals with this stuff, and they helped a doddering old man get across the busy street.

Any tips for folks out there hoping to follow your lead?

Write. Write every day. Write with passion. Then read it aloud. If it sounds good, it probably is. If it sounds like junk, it probably is. Keep the good and throw away the bad. When you have written something really good, publish it. If you submit your work to an agent in hopes of getting it accepted by a big-name publishing house, remember that rejections are just like the sunrise: They happen every day.

Will you ever publish to print?

If you mean, will I attempt to find an agent and try to get my work accepted by a big publishing house? Probably not (he self-publishes and you can, in fact, pick up his book here in the Driftless Region). I worked in marketing 25 years. Now I want to write.

Tell us about “Scrawny Dog, Hungry Cat, and Fat Rat: A Tragedy for Children” (March, 2014)

It’s a novel for middle-grades children, written 45 years ago by a 19-year-old college student setting out on the long road to become me. Publishers (then) were not interested. I read it to my children, who had little choice but to say they liked it. Somewhere along the road, the manuscript was lost. My college roommate reconnected with me a few years ago, and one day he amazingly said he had a copy of the final draft. He encouraged me to rewrite it and publish it. I gave him a copy of the revised manuscript in November 2013. He died 12 days later. Now my grandchildren read it and say “Ah, pajamas!” – Cat cursing. I don’t know if kids today will like it. I rewrote it and published it as a tribute to friendship, and the book is dedicated to my friend Michael Shelton.

Lightning round:
What’s the first thing that comes to your mind…?

Books: Adventures.
Internet: World’s biggest library.
Summer: Almost fall.
Dog: You know, I shoulda been a professional dog trainer…
Kids: Have them while you’re young.
Ice Cream: Chocolate
Hunting: Heaven
Purple: Passion (Purple Passion was an alcoholic beverage made with Everclear; it does not taste good when it come back up through your nose – not that I personally experienced this)
Procrastination: The mother of all innovation.
Money: What you will not make much of as a self-published creative writer.

Aryn Henning Nichols has wanted to be a writer since fourth grade. Since she has so many titles at Inspire(d), she doesn’t ever say, “I’m a writer.” But maybe this summer she’ll give it a try… everyone really should be exposed to her terrible puns, right?

Aaron Lurth is a graduate of Luther College (BA) and the University of Iowa (MFA in Photography and Graphic Design). He serves as Director of Visual Media at Luther where he also teaches in the Visual and Performing Arts department. Aaron has been a photographer for the Experimental Aircraft Association at AirVenture (the world’s largest air show), as well as numerous marketing campaigns for Luther College, minor league baseball teams, and in advertising for General Electric, NCCA Magazine, Sport Pilot, CNET.com, and many more. Aaron also leads National Geographic Student Expeditions and teaches at Decorah’s ArtHaus.

Tags: crazy old coot, decorah, Dragonfly Books, How to be a writer, how to self publish, how to writer, inspire(d) magazine, jerry johnson, local author readings