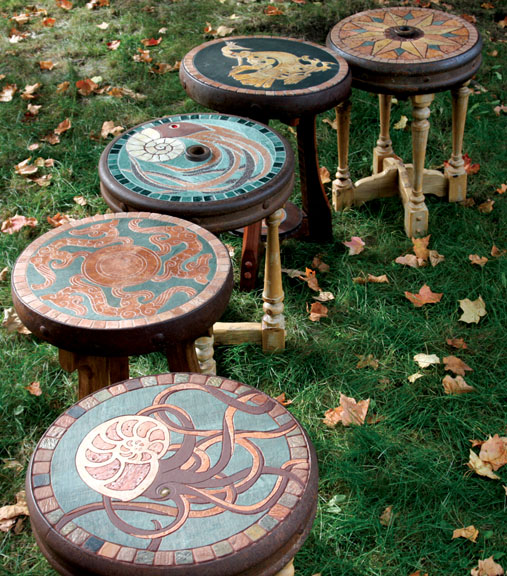 Decorah artist John Kjome is a patient man, that’s for sure. He thinks, plans, and meticulously strategizes his next move – both in life and art. Probably checkers too. 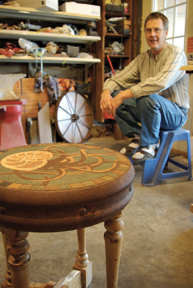 Maybe that’s why, after more than four decades creating in one form or another, John is coming back to his artist roots and joining for the first time in studio tours like April’s Bluff Country Studio Art Tour. One thing’s for sure: John has learned in life that no matter what, there’s always a process.

Walking into the Kjome household, you are immediately greeted by art – actually, you’re first greeted by the family dog, Vonnegut, but then it’s art. Limestone countertops, custom cabinets – even the stair risers are things of limestone and geode-marked beauty. In the basement walkout studio, John has, of course, planned every piece of furniture. Heavy things are on castors and most are multipurpose – first it’s a pottery wheel, then it’s a table. The space is efficiently used, to say the least. Their two cats – Seba and Jazz – lounge lazily, one inside a box, the other with a paw hanging over the edge of a shelf, right next to tile cutters and art supplies. For the past 30 years, John, along with his whole family – wife Gail and children Eric, Randi, Jordan and Kaija – have worked together to build a magical, inspiring home where they can comfortably create.

“When we bought it back in 1980, it was the first house sold in Decorah that year – and that was June. Times were tough. It was only this small area then,” John says, gesturing to the front of the house. “But we were happy to have a home.” They’ve since added countless upgrades, stunning improvements, and an addition, part of which houses the art studio. It’s only fitting that a house full of artists would live in a house of art. But if John hadn’t explored his creative side on a whim at the University of Northern Iowa, his life may not have directed him here.

“I had a friend who was taking some classes in the art department and I thought what they were doing was pretty cool. I went to check out it out and I was hooked,” John says. “I took everything from jewelry-making to printmaking. I realized how interesting the processes were – that was really the magic behind it all.”

But it was the 60s, and there was a war going on. John signed up for the Navy. After four years and almost arriving in Viet Nam twice, he decided to go back to school. San Diego State University continued to foster John’s artistic side, and in 1971, he met Gail.

“She lived upstairs and I lived downstairs,” he says. “I sliced up peaches and honey and offered to share. We have been sharing ever since.”

Things were good in California, but when his brother called with the suggestion, “We should build Norwegian looms,” John said, “Okay!”

“I think that was always the plan: to get me back here,” he says. “When I got here, my brother was in Norway. He said, ‘Well, since you’re there, why don’t you enroll at Luther?’”

So he did. That’s when John met famed Northeast Iowa potter and teacher Dean Schwartz.

“I wanted to take the advanced class because I thought I had soooo much experience at San Diego State. But he insisted I start at the beginning,” John says. “Within two hours, I understood. It was the process. It wasn’t, ‘Here’s a pottery wheel; here’s some clay.’ It was about acquiring skills. Master one and move on to the next.”

John loved Schwartz’s teaching so much that he decided to work with him at South Bear that summer as well, taking classes and learning. After, he headed back to San Diego State to finish his BA.

“By that time I realized – I guess we weren’t making looms,” he says.

The semester and summer with Schwartz fueled a fire, so to speak, within John. It also afforded him some good connections. After graduation, he spent two summers working with a colleague of Schwartz’s. Yet another famed potter: Marguerite Wildenhain. Countless hours, days, and nights were spent at Pond Farm, the remote mountaintop home and studio near Guerneville in Northern California. Despite that, John came out of it with only two pots. “And even those I had to sneak out!” It was more about the processes, the learning, than it was about producing.

“It was just a wonderful experience,” he says. “Every moment of it, you just relished.”

So much so that he and Gail, along with their son Eric, wanted to stay Northern California. But at that time, there was literally nowhere to stay; people were living under bridges, waiting for houses and apartments to become available. A flipped a coin directed the Kjomes to Texas, where Gail had relatives. It was there that John learned about carpentry and building houses, which eventually led to his tile work and what he’s well known for: building bathrooms from scratch.

Fate eventually brought the Kjomes back to Decorah. And for John, back to art. In his current projects, John recycles old metal tires. He turns them into tables, making a custom base then tiling the tops. Every piece is unique – different numbers of spokes lead to different kinds of tables, sizes vary greatly, and each tells a story of the past.

“These wheels have a history. I really appreciate the aspect of storytelling,” he says. “It’s not just something I go down to the lumberyard and buy, and that’s fun!”

John is happy to do projects that don’t require hours of time on his hands and knees; tile work is grueling. He hopes to be working on more pots soon as well. The furniture and furnishings seem to be a natural next step for the process that is John’s life.

“I’ve built theses places,” he says with a smile. “Now I want to furnish them.”

Aryn Henning Nichols also enjoys the processes of things. She wishes she could be a little more patient though. She thinks John’s tables are amazing.

What a great story, Aryn, and what legendary teachers you have had, John! It’s good to read a biography because it helps me to understand your art better and make connections between schools of artists.