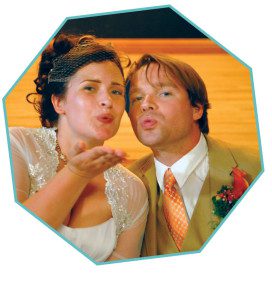 Once upon a time, in the nearby hamlet of Spring Grove, Minnesota, there came together two professional performers who loved each other – and musical theater – very much. Indeed, their life so relishes in the stage – its lights, its music, the passion of it all –that they themselves were married on one: in Steyer Opera House in Decorah.

Meet Rachel and David Storlie. If their names don’t ring bells, their performances should: one or both have appeared in nearly every recent show produced by Ye Olde Opera House in David’s hometown of Spring Grove – from Little Shop of Horrors to The Sound of Music. Rachel, a trained vocalist originally from Caledonia, Minnesota, wasn’t that surprised when David – who she says bares his full soul on stage – proposed to her in front of their tight-knit community… in the middle of a live production on Valentine’s Day 2009.

Today, their home on a shaded side-street in Spring Grove is virtually a set. Most of their furniture was acquired for one show or another, says David, an IT administrator at DECO Products in Decorah by day and a collector of old projectors, cameras, and vintage instruments off the clock. Rachel, for her part, maintains a private music studio and a wardrobe so character-driven that she could step out as a native to any era in history, from heels to hat (her favorite, acquired in a curiosity shop in London, features a taxidermied raven). “I dress as her for Halloween,” David says with a chuckle.

Such is the dedication that keeps them pouring 100 or more hours of volunteer energy into acting, directing, or managing aspects of each community theater production in Spring Grove, nurturing a special breed of community activist along the way, David says.

“It builds a core group of people who can get things done, like public events and fund-raisers. Actors can just jump into those situations and succeed. With theater, you just try out something, and if it doesn’t work, the next rehearsal/performance, you try something else. I trust the actors I work with on stage with my deepest emotions, and we overcome fears together. We are making ourselves into better people who work well with others.”

Rachel, a master’s candidate in opera performance at the University of Northern Iowa, agrees. “My studies are reaffirming one of life’s greatest lessons: active listening,” a skill she thinks is requisite for successful communication between actor and audience. “It is easy to fall into the trap of thinking about everything from your perspective and your character. It doesn’t come as naturally to understand the thoughts and motivations of everyone around you – but I think those are awarenesses people value in small towns and that are bringing people back to live there.”

“Theater and music build a bridge between imagination and reality,” she concludes, “and I am so humbled to walk across that bridge in an intentional, meaningful way, with David by my side.” – by Kristine Jepsen