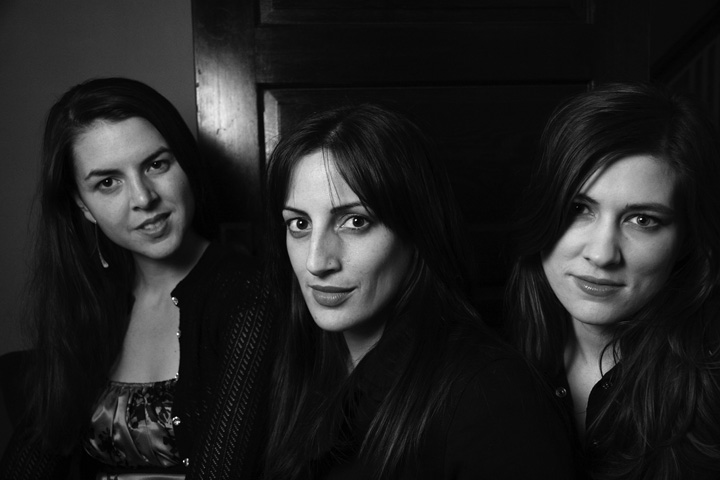 The Wailin’ Jennys might just have the coolest name in modern music. The obvious but clever pun on country music legend Waylon Jennings’s name is memorable, rhetorically satisfying, and translates broadly across cultural divides. It symbolizes folk music’s ability to span generations. And it was also an accident.

The band’s first gig – a guitar shop in Winnipeg, Canada – was supposed to be a one-time concert for three Canadian solo artists. But when the show was a big success, the owner of the shop suggested the three women form a band and tour as…the Folk Vixens.

“He thought we should have a name, but he kept trying to give us terrible names like ‘the Folk Vixens,’” Nicky Mehta says with a friendly voice and a self-deprecating sense of humor. “He eventually thought of The Wailin’ Jennys and we thought it was okay. So we made these posters before a concert as a joke, with terrible pictures of us that said ‘The Wailin’ Jennys,’ but they actually ended up getting us a lot of attention.”

Since their beginning in 2002, the all-female folk trio has recorded four albums, topped the US Bluegrass charts, appeared on ‘A Prairie Home Companion,’ and rotated personnel a few times.

Mehta, along with fellow Canadians Ruth Moody and Cara Luft, made up the original Wailin’ Jennys until 2004 when Luft went on to pursue a solo career. Enter Annabelle Chvostek, a solo artist from Indie music hotbed Montreal. While the band’s 2004 album 40 Days, recorded with Luft, sounds different than 2006’s Firecracker – recorded with Chvostek – the difference isn’t a deterrent. Chvostek’s distinctly smoky voice is simply an enjoyable change of pace. But in 2007 she left the group to pursue what has been a successful solo career and was replaced by current member Heather Masse, a Maine-born singer who was living in New York. Again, Masse has a distinctively different voice than her predecessors, bringing a slightly smoother element to the group vocally, although the off stage banter is now full of over-the-border jokes.

“There’s some good natured ribbing between us Canadians and Heather,” Mehta says. “We’ll tease her sometimes and she teases us for saying things that Americans don’t usually say, like ‘is it ever cold in here,’ or ‘is it ever hot outside,’ or ‘soory.’”

In spite of the phony rivalry, the group has a great sense of continuity, and that shows through their music. At least some portion of every Wailin’ Jennys song on 40 Days and Firecracker features intricate and beautiful harmonies created by Moody’s soprano, Mehta’s mezzo, and the revolving door of talented altos. The genuine blend of the three voices happens just the way a listener would imagine: organically.

“A lot of times if someone is singing the melody, and when everyone’s familiar with the song, everybody just kind of sings and sees where it goes,” Mehta says.

In addition to of course being talented vocally, The Jennys, as Mehta refers to them, are a cerebral bunch. In an era far removed from the origins of folk, The Jennys understand the difficulty of writing lyrics that sound new but at the same time have a genuine folksiness. For example, the song “Apocalypse Lullaby,” a title that certainly seems post-modern, is inherently soothing. The lyrics sound new, and probably couldn’t have come from a far away time period, but they seem authentic somehow. When Chvostek sings “Spin the speed of light/Tetrahedron blue/One last paradise/You can make for you,” it sounds like bluegrass self help for the modern era. Then some songs sound like old school heartbreak. Others empowering. There’s a non-specific spirituality to The Jennys music that calls on the gospel roots of folk, but is left wholly up to the listeners interpretation (intentionally). Folk music, like The Jennys’ name, is a constant in the American music scene because of its ability to unite old and new followers under a tent of commonality.

“It’s almost a self-revitalizing genre because it spans so many generations. You have people who’ve grown up with the originals,” Mehta says. “And you have the younger bands that are making folk music fresh and new. It can be in world music, or people paying homage to a particular artist. There’s been a lot of evolution in folk music. We’re all trying to make something fresh while trying to honor what’s come before.”

Folk music isn’t the only thing evolving. With the advent of home recording, coupled with the accessibility of the Internet, getting your name and sound out takes a whole new strategy.

“It was harder to get an album made before, but if you got an album made it was easier to get it heard. Now it’s inverted,” Mehta says. “You have to market so much smarter now.”

What’s great about The Jennys is that, no matter how things change, they seem to understand their music and what the genre means in this era of arrogance, cultural indulgence and corporatism.

“It’s more than being quaint. It’s about remembering times when community was more important,” Mehta says. “It’s about embracing the concept of evolution and change, but reminding everyone that we’re part of a global community.”

The Wailin’ Jennys  performed at the Center for Faith and Life at Luther College in Decorah as part of the Center Stage Series.  www.centerstage.luther.edu For more information on Wailin’ Jennys, visit www.thewailinjennys.com.

Sam Wiles enjoyed writing this article, doing the interviews and listening to the music. Additionally, Sam now has plans to star in his own all-female folk trio, the Confusin’ Susans. They will begin touring this summer.