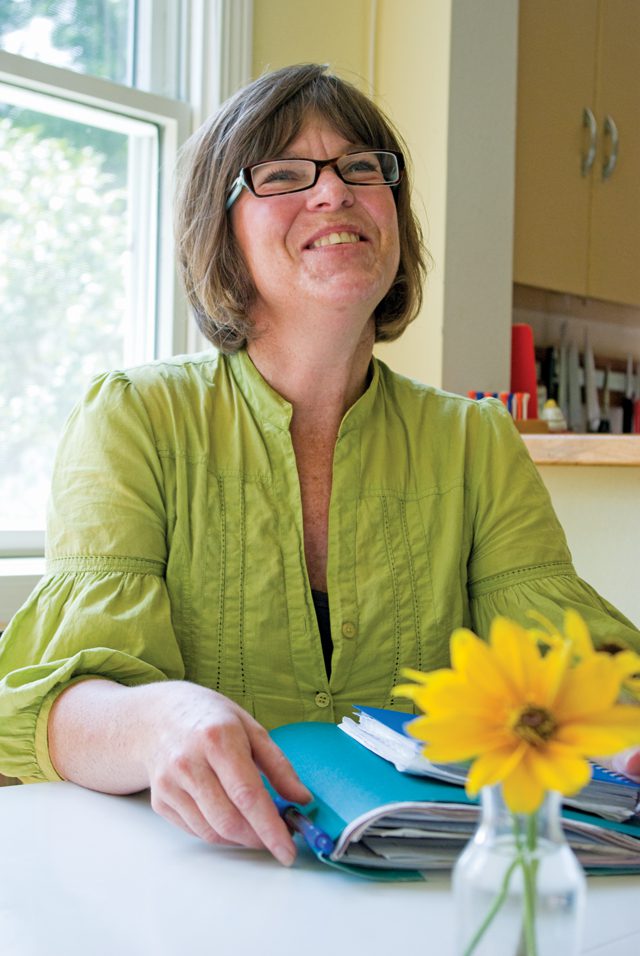 2015 Update: Project Care will once again host a graduation celebration for local youth in foster care who are not only graduating from high school, but al so aging out of Iowa’s foster care system. The Project Care graduation, scheduled for May 12, 2015 and hosted through Decorah’s First Lutheran Church, helps equip students’ dorm rooms and apartments with all the basic living essentials. This year, there are eight students – the most Project Care has ever helped! Visit the First Lutheran website to see what to donate or how you can get involved (they’re always looking for new committee members too!). For more information please contact Kirsten Heine (pictured above, photo by Aryn Henning Nichols) at 735-5358 or Jenine Jordahl at church at 382-2638.

It’s cicada season, and to school kids that means one desperate thing: the end of summer vacation. But for more than 450 of those Iowa teens the whirring in the treetops is white noise to the fact that, not only are they heading back to school, but they’re just months away from facing the world on their own. Alone.

They’re foster kids – veterans of a system that both scrutinizes their particulars and commodifies them in a sincere but limited effort to keep them safe, clothed, and fed. And loved too, hopefully.

Serving 6,000 kids in Iowa each year, the foster care program manages children who’ve been abused, abandoned, neglected or otherwise estranged until they can either return to their families or find a new permanent home through adoption, according to Iowa KidsNet, a collaboration of six Iowa non-profits that recruits, trains, licenses and supports families to foster and adopt Iowa kids.

But reunification and adoption don’t always happen, and foster children “age out” of state custody when they turn 18. Some graduate. Some don’t. In a 2010 report on the progress of foster grads in Iowa, Wisconsin, and Illinois, it’s clear getting a diploma isn’t always the most pressing concern.

Conducted by Chapin Hall, a policy research center at the University of Chicago, the study found that of the 732 students tracked from “age-out” to age 23-24, 37 percent had been homeless or couch surfed since exiting foster care. Less than half were employed at the time of their last interview, most who were employed were not earning a living wage, and more than one-quarter had had no employment income in the past year. In addition, two thirds of the female participants had been pregnant, and 45 percent of young men had been incarcerated.

“It’s impossible to overstate the disorienting effect of growing up in the foster system,” says Kirsten Heine, chair of the Mission and Outreach Committee at Decorah’s First Lutheran Church and herself the foster/adoptive mother of two boys. “Can you imagine your child or grandchild being picked up and moved to a stranger’s home?” 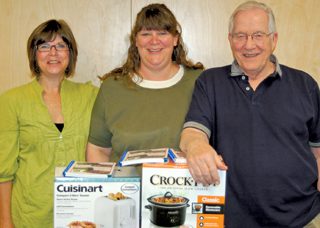 So when Heine’s pastor, interim clergyman Harris Hostager, asked in 2011 what her brand-new committee was doing to support Lutheran Services in Iowa (LSI) – a local partner agency of Iowa KidsNet – Heine shouldered the challenge. She hit on the aging out issue when she asked her friend and social worker Deana Hageman at LSI about foster kids’ particular needs.

“Problem was, it was already the beginning of May. We had just weeks to identify the kids in Winneshiek County who were aging out and do something about it,” Heine says. 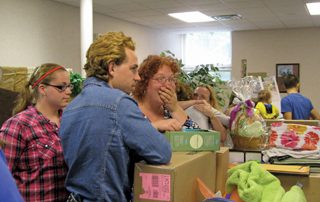 Hageman explains that connecting with aged-out students can be tricky because they quickly drop off the state’s radar when they turn 18, the age at which they can leave foster care and be independent. “Many students cannot wait to be free,” she says. “Every child is different, but almost all those who opt out just want to be on their own and free of ‘the system.’”

(Above photos courtesy Project Care. Top: Heine, along with fellow organizers Deanna Hageman and Clergyman Harris Hostrager. Bottom: People were overwhelmed by the generosity of the community and Project Care.)

Challenges aside, they found eight students within 35 miles of Decorah scheduled to graduate both from foster care and high school. The First Lutheran committee dubbed the effort Project Care, and Heine took to the streets, approaching dozens of local businesses about donating goods, services, and supplies that new foster grads would need as they began life on their own.

“I walked in with a homemade flier and walked out with stainless steel pots and pans, microwaves, TVs, all way below cost or donated outright. I was only turned down once,” says Heine with a shy grin, still astonished in her quiet way.

Within days, she had laptops, Crock Pots, toasters, cookbooks, flatware (and “really beautiful flatware at that,”), towels, gift cards for gasoline, pre-payments on utility services and more.

“Bless Kirsten’s heart! Every time she called with project updates and stories of the ongoing generosity of the community, I cried!” says Hageman. “You have to understand, having ‘new’ is really important to these kids – and to the families who’ve cared for them. We foster parents are thrifty by necessity. We garage sale. We find ways to make ends meet. Through no fault of their own, foster kids rarely have anything theirs alone, and the way our community validated that simple need was incredible.”

With just days to go before area high school commencement ceremonies, Heine and Hageman turned their attention to customizing gifts for the students and planning a real, live graduation party. “It was difficult to get the kids to articulate what they really dreamed of,” Heine explains. “It spoke volumes about them not wanting to dream big, only to be let down.”

“We kept discovering, over and over, how little things have huge effects,” Heine explains. “When we asked one young woman what she wanted most, if she could have anything at all for graduation, she requested ‘a butter yellow cake with whipped cream cheese frosting.’” So Heine ordered six cakes – one for each student. 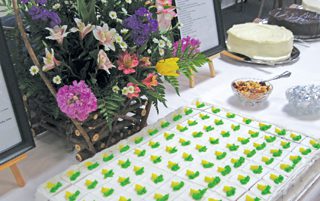 Another student requested a new set of tires for her car so she could commute between her part-time work and the college classes she’d enrolled in. Still another student reluctantly asked for help paying down his investment in a new wheelchair.

In addition to hard goods, Heine rounded up commitments from banks to help establish savings accounts and learn budget planning. Another vendor offered free job training to model the basics of professional conduct and success in the workplace. “It helped having this cross-section of donors take an interest in helping the students, having them see where and how to get answers for themselves without anyone telling them they had to do this or that a certain way,” Hageman explains.

By the time the party rolled around, Heine had enough gifts for each student to cover a buffet table. “We had to ‘wrap’ them with table cloths,” she says. The students, some of whom knew each other through foster programming, were able to build their own guest lists. Some invited foster families. Some reached out to birth families, their former social workers, and friends. A bevvy of project donors came, as well.

“The kids had no idea what was coming. When the gift-giving started, they were overwhelmed and excited and grateful. Tears were flowing everywhere,” Heine says, misting a little herself.

Since that party, four of the students have made plans to start college, and all are living on their own. While they declined further recognition in this article, their former caregivers and Hageman say the legacy of Project Care is to spread awareness of Northeast Iowa’s foster program and the particular needs of the young adults it raises.

“I’m always telling foster kids, ‘Don’t let your past determine your future,’” says Hageman, “but there’s no easy way around the fact that we all make decisions based on what we know or have experienced, which for foster kids, sometimes isn’t great. We’re often asking these children to do things differently than they were raised, which makes them feel vulnerable. They have to feel a positive vibe around them in the wider community to begin to believe it.”

And as for Heine, well, she’s back at work with the committee, pushing for the construction of a website for Project Care, organizing related presentations and events for the fall and winter, and maintaining local buzz surrounding next year’s fundraising for graduates.

“I’m just so awed by the response to this need,” she says. “Many of this year’s donors didn’t even know the recipients’ names, and yet they gave what they had and were most sincere in wishing them well. I don’t know too many communities that just do that.”

Kristine Kopperud Jepsen is grateful that she grew up in a family and small-town community that let her make her own way and feel loved, every time she glanced back for support. She hopes to support Project Care and other local initiatives by helping them build a home on the Web and raise awareness of their mission.

Right now, this minute, there are more children in Iowa in need of foster care than there are homes to provide love and support. Get certified to be a foster and or adoptive parent by completing training called Permanency and Safety: Model Approach to Partnerships in Parenting. PS-MAPP is a 10-week series of 3-hour classes. For information, contact Kidsnet at 1-800-243-0756 or visit iowakidsnet.com to get scheduled for an orientation session. 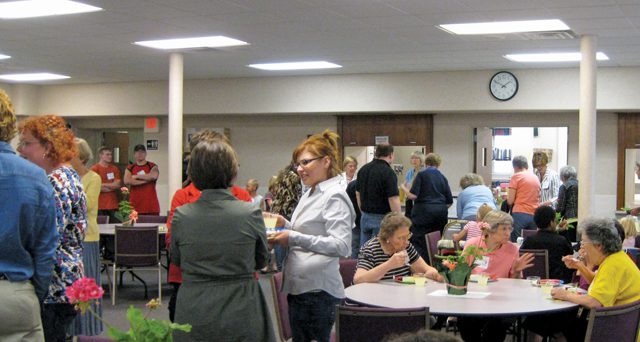 “We never forget our past but we move on. I’ve moved probably 20 times, treatments, foster homes, hospitalization, just different placements I guess. But you learn something different from every placement.” Graduate Taylor Meana (center in above photo) said to KTTC News at the Project Care graduation party spring 2011. She also told them she was amazed at how many people cared for her enough to put on the party without even knowing her. Photo by Deana Hageman.