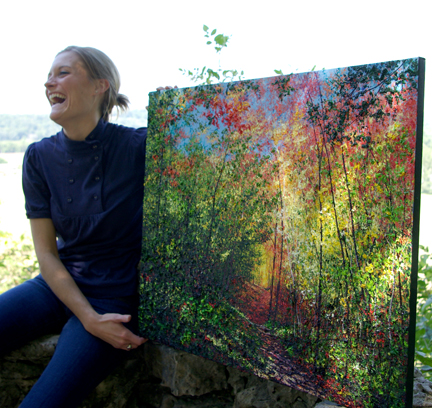 Ashley Dull Lindeman’s enthusiasm is infectious. She bustles through the door of a downtown Decorah coffee shop with arms full of paintings, at least one still mildly wet. We hug – I’ve known Ashley since she was seven and her sister and I were best friends in the fourth grade – and we both speak at once.

“I haven’t seen you since that time we talked about changing the world,” I say.

She laughs, “I’m still trying to change the world…somehow.”

This earnest mission is at the root of what inspires Ashley in her art. She’s not jaded. And, no, there isn’t supposed to be a “yet” on the end of that sentence. Maybe she’s naïve. But who cares? She’s definitely not cocky, especially for a 26-year-old who is actually making a living at art in the Twin Cities, a place loaded with talented artists and creative folk. No, Ashley is willing to admit she’s got a lot to learn

“I’m still trying to figure out this world – I don’t know enough about anything, really,” she says humbly.

She does know a thing or two around a canvas. If it weren’t for the amazing texture created by the carefully molded piles of still-wet paint, her nature-inspired pieces could be photos. Really dimensional photos, almost like you could walk right in.

“I want people to say, ‘I wanna touch that. I wanna be there,’” she says. “I will be out walking in the woods, touching everything, enjoying the peace that nature brings – I want to put that in my paintings. I want to make people feel good.”

Ashley’s upbringing on a small farm in between Postville and Decorah was full of the big skies, beautiful trees, and picturesque landscapes of the Driftless Region. A walk in the woods could inspire as many as three-dozen future paintings. Perhaps this is where the passion she’s had for art “since forever” began.

Nurtured by teachers with good foresight – Postville High School’s Rose Schutte and Luther College’s Doug Eckheart being two major mentors – Ashley took the encouragement they gave her, “You really have something here,” and ran with it. She graduated from Luther College in 2005 with a double major in health and art. And like many recent graduates, she wasn’t sure what was next.

“I thought, ‘What am I doing? Where am I going?’” she says. “But I did feel that it was possible to really do it, to be an artist.”

It certainly wasn’t a straight shot to galleries and commissions from there though. She moved to the Twin Cities to work as a personal trainer, painting in her free time. In 2007 she finally applied for her first art fair in Edina. And got in. During that show Ashley met her now “art agent” Jack McCauley. McCauley helped her put together her first gallery show in Roseville and it was a huge success. This was the affirmation Ashley needed to paint more, train less. McCauley continues to represent her work today.

Her pieces have since been shown in seven galleries – along with four shows in the next two months alone – and she landed a lengthy internship with nationally known Twin Cities artist Pamela Sukhum. Now, just two short years since Ashley’s first show, she’s armed with a wealth of new skills and information for her life both as an artist and as a self-employed business owner.

“It is still a business, and I need to make money,” Ashley says. “If art takes me there, then okay.”

She has learned it’s a lot of paperwork. And marketing. And networking. And while it’s fun to envision a future of grandeur, she’s not expecting it – perhaps doesn’t even want it.

“You know, I think it crossed my mind what I was younger, ‘Maybe I want to be this famous artist,’ but now – I could care less about fame. I want to bring peace and beauty to people’s lives,” she says, earnest once again.

She also wants to bring hope to people’s lives, and attempts this through a “giving back promise.” Ashley donates a small percentage of sales at her shows to an organization she’d like to support. The exhibits in the Twin Cities have been tied with non-profit organizations mainly dedicated to helping at-risk youth. For her Decorah show, running from October 1 through 31at The Perfect Edge on Washington Street, Ashley has, we’re humbled to say, chosen Inspire(d) Media as the organization she’d like to support.

“I believe in what you’re doing and want to help if I can,” Ashley writes in an email after informing us of her choice. She’s also really excited to have her paintings in the town of her alma mater.

“I always hoped – and sort of knew – I’d do a Decorah show,” she says. “So many of my paintings are Decorah landscapes.”

In addition to the giving back promise, Ashley has a few other traditions tied to her work: She always picks a theme – the current show is entitled “From Darkness to Light,” inspired by the prayer of St. Francis ­– and she always hides a bible verse somewhere in each painting. Don’t get worked up – she isn’t really a beater of said bible – she just relates many of the verses to her experiences in nature: feelings of calm, peace, love, joy, beauty, change, and new life. It’s by translating these experiences to her paintings that she plans to change the world.

“If I can help someone feel a connection to the world around us and a sense of purpose in this life,” she writes, “then I know I have done right by my talent.”

Aryn Henning Nichols truly believes you can change the world with passion (the good kind) and positive actions. When she was 21, she said this to someone and they told her she’d just wasn’t jaded yet. It’s been a happy seven years in the so-called land of bunnies and unicorns. She’s not planning on leaving any time soon.

For more information and to check out some of Ashley’s art, visit artbyashleydull.com