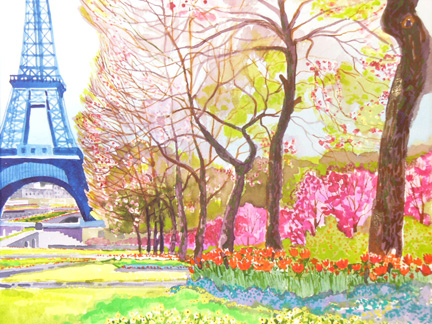 In the middle of a gallery, with walls covered in bright memories of places and events he’s experienced over the past four decades, Decorah artist Doug Eckheart begins a sentence just as he’s probably begun many before: “Like I tell my students…” he pauses briefly, “surround yourself with what you love.” 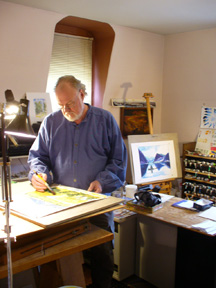 Surrounding Doug at this moment is the bright aqua of the Venice canal, an exceptionally pink spring in Paris, the wide span of a Norwegian horizon, the geometry of Belgian houses. But more than the locations, it’s the feelings he had there that inspired Doug to paint the 20 pieces in his current show, “My Journey: Images of the Artist’s World Travels.” The vibrant watercolors aren’t entirely factual – colors are altered, scenery adjusted, lighting tweaked – but each is a personal experience of that specific locale, a record of a moment in time for Doug. These records, locked in memories, photos, and sketchbooks for quite some time, finally began to manifest on canvas late last year.

“The idea of this show has been in my head a long time. About 35 years,” he says. “These things need to percolate.”

While the travel took decades, the painting process took less than half a year. And each piece comes with a story.

“I intended for the paintings to inform and educate people about the place, event, cultural and historical significance,” he says. “I wanted it to be like a tour for people.”

Like this show, Doug’s career as a Luther College art professor spanned 40 years. 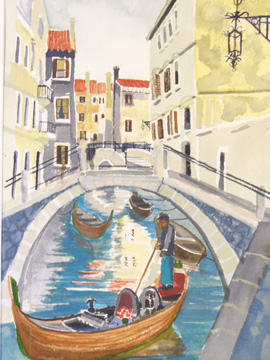 He retired in May 2009 with more than 60 one-person and 40 group shows under his belt in cities such as New York City, Chicago, Des Moines, Malta and Norway. He has held the title of artist-in-residence, keynote speaker, juror, department head, gallery director, and curator. He has been featured in print and on television, and has served internationally as a visiting artist. Not bad for a guy who never thought this was going to be his thing.

“I didn’t start out to do art,” he says. “I was always outside building forts and bow and arrows. But my friends and I would get together to draw. We were always listening to the radio and drawing.”

In Moorhead, Minnesota, a young Doug Eckheart also began to watch a TV show, “Come, Draw With Me,” with his friends. It featured artist Jon Gnagy, who was, essentially, Doug’s very first art teacher. From this time on, Doug always had a sketchbook handy. Art become his first love. His second was basketball. The third and most life changing: Georgiann, his high school sweetheart and now wife. The two went on to get married, begin a family, and start a life together. He earned his bachelor’s on a full scholarship for basketball at Concordia College in Moorhead, his master’s at Bowling Green University in Ohio, and then had a brief, albeit incredibly busy, stint teaching at Waldorf College before finding himself in Decorah, Iowa. Famed Decorah artist Orville Running, one of the “Brothers Running” who had helped Doug at various points in his life, asked Doug if he’d like to come teach at Luther College.

“I knew when I drove down the hill on Highway 9 that this was the place for me,” he says. “The interview consisted of a three-hour tour of Decorah – everything he showed me had to do with landscapes, all places he knew I’d want to paint.”

Decorah had him at Dunning’s Spring. And it was this lush landscape that Doug first set out to paint in his brand new home.

“Really, I found the perfect place – no. It found me,” Doug says of Decorah. “Life led me right where I was supposed to be.”

Faith, he says, has directed him in virtually every aspect of life. Now, looking back on more than four decades of teaching, a 48-year marriage to his childhood sweetheart, four grown children, 13 grandchildren and one great-grandchild, life has definitely taken him on a sweet ride. Turning his sights on retirement, Doug sees painting, teaching workshops, and finding patience for golf just as he’s found patience for watercolors. Looking over his art, too, Doug can definitely see the years passed.

“My early work has a different energy,” he says. “I like it. It has a spontaneity you lose with age. Of course I’ve improved in some ways too. I like my age. I like where I’m at and what I’m doing.”

And this, Doug says, is paramount.