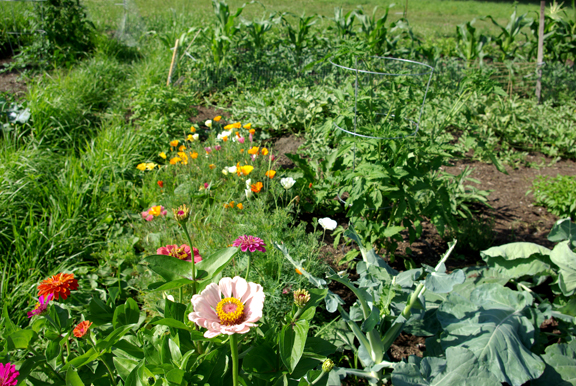 Story and Photos by Kelly Larsen

The disdain I once held for gardening still remains distinct in my memory. As a little kid, I dreaded being told to pick beans from the long, lush bushes beyond our back porch. With dirt-encrusted ice cream buckets in hand, my siblings and I would trudge out into the sunshine and complain our way down the never-ending rows, sweating and moaning.  Mission accomplished, bushes bare, we would trudge back inside, plopping the bucket onto the scarred kitchen table only to be greeted with a smile, a cutting board, and the task of trimming heads and tails from the beans before dinner. After considerable protest, we would sigh, resigned to our fate, and begin the monotonous chopping process. I hated gardening, my nine-year-old self decided. I liked beans, but definitely not gardening. 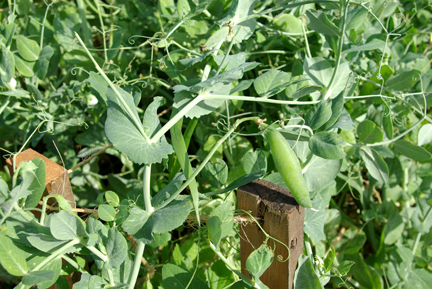 If only I had known.  A decade later, my college roommate and I found ourselves craving homegrown, flavorful produce after a semester of cafeteria food. In a surge of optimistic domesticity, we soon had our own little assortment of plastic cups and earthenware pots lined scraggily along the windowsill in our dorm room: carrots, marigolds, thyme, basil, parsley, oregano, and violets. Some were successful, some less so. But we treasured our little garden, watering it daily with drips from our Nalgenes, rejoicing together over little green sprouts in the early spring gloom of papers and exams. In our garden we found a return to home, the satisfaction of growth and development, and a little outlet from the stress and cares of college life. We loved our garden. It didn’t matter that our carrots were underdeveloped and the oregano never grew. We were trying it. Soon our curious friends came in to examine our attempts, some eventually planting their own flowers and veggies. Our puny plants quickly blossomed into a community garden of sorts, an assortment of pots worth much more than the sum of its parts.

Gardening – both community and home-based – is growing just like those scrawny plants in our dorm room window. According to a recent survey by the National Gardening Association, approximately 36 million American homes – 31% of US households – had a food garden in 2008. In 2009 that number was expected to increase dramatically, up to 43 million households (37%). Reasons for that upswing varied, with the desires for better tasting, cheaper, higher quality, and safely grown food topping the list.  Though the vast majority of food gardens are still found at individuals’ homes, more than a third of those surveyed said they would be at least somewhat interested in community gardening. The idea of gardening in community, a group of people sharing a plot of land, has been around for years, especially in urban communities where green space is scarce. In recent times the trend has spread into more rural areas, including Northeast Iowa.

Gardening has already proven itself a valuable pastime. The monetary return over one growing season from the average American’s $70 garden investment equals about $530.  With recession-frugality reigning and a generational trend towards organic, eco-friendly, and homegrown products, gardening – especially community gardening – has become a popular way to share, produce, and save. Even the White House has caught the bug: Michelle Obama’s food garden has made international news and the USDA’s People’s Garden is inspiring embassies around the world. Gardening has gone mainstream, appearing on such popular shows as Martha Stewart, where Decorah’s own Seed Savers Exchange was featured in February 2009. 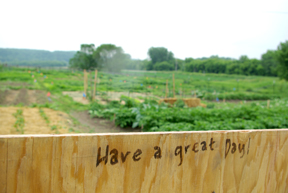 Though Seed Savers Exchange’s focus is seeds, not produce, the organization plays an important role in area agriculture and gardening. Its lavish gardens, nestled among the Heritage Farm’s acres of woods and trails, certainly catch the eye of local and visiting gardening enthusiasts. It was misting gently when I visited, and my jaw dropped at the veritable Eden of growing plants. Notebook in hand, I strode quietly alongside Shannon Carmody – an Illinois native now interning at the heritage farm – as she pointed out highlights of the organization’s many on-site gardens. Vegetables and herbs nestled among flowers and themed mini-gardens within a broader tapestry of flora all provide beautiful examples of edible landscaping, companion planting, and organic gardening at their finest. But the Seed Savers gardens serve a greater purpose than just beautifying Northeast Iowa. The number of needy recipients of the organization’s Herman’s Garden program – a seed donation program designed to help non-profit community gardens and educational programs around the country – jumped more than 30 percent in 2009. Seed Savers has seen huge growth in public interest in gardening over the past year and membership has also increased 47 percent.

“It’s trendy,” Shannon laughs.  “Especially with people in our younger generation, there’s a do-it-yourself trend.  Knitting, home brewing… even gardening.  It’s vogue; it’s hip now. It’s hip environmentalism.”  Of course, she adds, the increased interest in gardening isn’t solely due to the garden projects of celebrities like Martha Stewart and Michelle Obama. “It goes mainstream, and then it’s accessible. I hope people actually see that it’s important. It’s important to have your own food, to understand where it’s coming from.”

Seed Savers Editor John Torgrimson agrees. “I think the growth is due to a lot of different things,” he says. “You could say that the economic times are such that people are looking for ways to control costs, and gardening is something you can actually do. A lot of people do it for recreation. It’s a great pastime. And the benefits are obvious.”

John and his wife Pat enjoy a large garden at home, while Shannon maintains a plot in Decorah’s community garden, located in the floodplain by the Upper Iowa River.

That community garden, Shannon adds, has been a joy, and enables inexperienced gardeners to learn from others. “It’s hard to be the pioneer when you don’t know what you’re doing,” she explains. “But when you see your neighbor doing it, it becomes accessible.”

Rick Edwards, Decorah Parks and Recreation director, was instrumental in bringing the Decorah community garden to fruition in the spring of 2008. Though a massive flood wiped out the first year’s efforts, this summer there has been a resurgence of interest, with different families and individuals maintaining about 20 gardens. The 20-by-20-foot plots cost $25, with water and mulch provided. The soil is good, Rick adds, though the deer can be bad.  But that’s part of the gamble of gardening.

The beauty of the community garden aspect, he says, is in the collaboration and creativity. “Everybody gets together and talks, you know, about how stuff is growing, how the deer are eating it… some people are having pretty good success,” he explains.  “We have everything from very experienced gardeners to some gardeners that are giving it their first shot. But they’re all in one spot, so the novice gardeners can get advice, see how the experts do it, help each other out.”

The sense of community, however, isn’t the only thing that drew Edwards and residents of Decorah’s neighborhoods to gardening. For Rick, like many others, it comes back to knowing where his food comes from and what’s in it. “There’s something great about having a tomato and knowing you’re the only one who’s touched it,” he says.

Not surprisingly, that desire for healthy, local food is also part of what inspired Decorah’s Jenni Werners and Deborah Bishop to organize other volunteers and plant a garden specifically designated for the Decorah Area Food Pantry.

“Most people at the food pantry can’t afford to garden themselves, or housing is the issue, or even transportation to get down to the community garden,” Jenni explains. 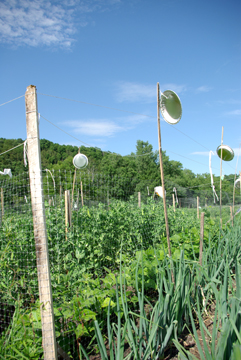 Surrounded by fencing draped with clanking, deer-dissuading tin pie plates, the plot is full of a variety of well-tended vegetables, from the conventional potato to the mysterious rutabaga. Jenni and Deborah also know of many other groups that have collaborated on garden projects for donation to the community. Theirs is just a small patch in what they hope to see grow into a larger movement. Though the struggling economy has probably bolstered the growth in gardening, both women agree that the revitalized interest is a good thing.

Gardeners like Jenni and Deborah are an enthusiastic lot, and that enthusiasm seems contagious. Luther College has a large community garden for faculty and staff flourishing on Pole Line Road; Waukon boasts a community garden which was planted to improve access to locally grown food; the Northeast Iowa Food and Fitness initiative maintains a heavy emphasis on fresh, healthy, and local food; the Decorah Community School District has begun working to add garden-grown produce to its cafeteria options; and even college students like myself, stereotypically both busy and cheap, are forgetting their childhood disdain and digging in.

Perhaps the pendulum is swinging in a new direction. Gardening is chic again, and the generational trend of re-learning our grandparents’ habits is inspiring. Maybe next year my roommate and I will be able to find a patch of ground on campus where we can dirty our hands and grow a few herbs and veggies. If not, the windowsill will work fine. After all, the carrots are only part of the joy. Growing them together is the real fun.

Kelly Larsen is a student of international relations, journalism, and Spanish at Calvin College in Grand Rapids, Michigan.  Next year she dreams of growing a watermelon in her dorm room “garden.”

I always look at the plot by Bookends and Beans and think “Why is there not a community garden right there?”