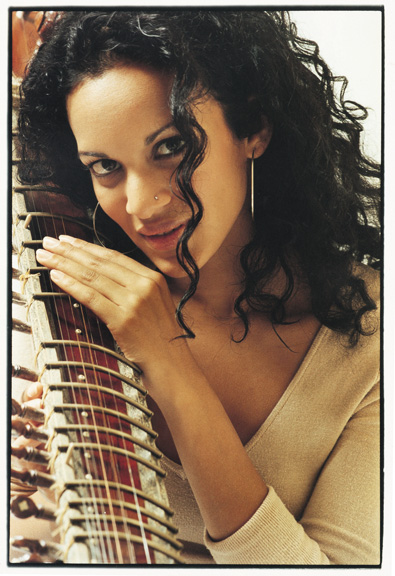 Halfway across the world, in a land full of colors, ancient traditions, and life oh-so-different from the Midwest – America, for that matter – a 9-year-old Anoushka Shankar began to play an instrument that would shape her life. The sitar – a plucked string Indian instrument with a long hollow neck – was miniature and specially made for young Shankar. And although it was her first time really playing, the music, it seemed, had always simply BEEN there.

“I was going to concerts from when I was a baby so it’s just kind of an intrinsic part of all my memories,” she writes via email from Australia.

Now 28 years old, Shankar travels extensively around the world with her work.“Right now I’m sitting in a gorgeous outdoor atrium looking at the Sydney Opera House,” she writes via email. “Currently, life is sweet.”
The beautiful musician grew up surrounded by creativity: daughter of the legendary sitarist Ravi Shankar, she couldn’t ask for a better sitar teacher; she also has a musician mother; and many relatives involved in the arts in some way or another. And perhaps most recognizable in the Western world, Shankar’s half sister is that popular jazz singer Norah Jones.

“It’s great being in a really artistic family,” she says. “It creates an atmosphere to learn and soak up art and culture in. It’s not hard to be an individual because we all support each other in our individual feelings and pursuits.”

Those pursuits have led to five albums, a book, acting roles, and experience composing, arranging, and producing music. Shankar debuted in concert and on one of her father’s albums at just 13, and the rate in which her career has advanced since then is amazing, and to Shankar, occasionally a lot to take in. But through high times and low, she still believes her chosen path was the right one. She wasn’t defined by her artistic family, and she always knew had a choice, no matter how genetically predisposed to music she may have seemed.

“Sometimes it was overwhelming, and yes, sometimes I did have thoughts about alternate careers, but I also loved what I was doing and the instrument I was playing,” she says. “So it was more a question of continuing to further my career. I knew I was never entering a lifetime contract, so I knew I could do what I wanted to do, but it was an amazing experience to be able to learn, perform, and travel in the environment that I did.”
Wearing the many hats she does also helps make thing interesting.

“I love keeping my life diverse,” she says. “I honestly have no idea how to live any other way. I grew up between three continents and have always toured and have different inspirations. It’s beneficial to me to have fresh inspiration and new experiences.”

This helps Shankar branch out musically as well. The phrase “World Music” is used to define her genre, but it’s a pretty broad term. Shankar likes to fuse different types of music together to produce something sometimes unexpected.

“As someone that listens to all kinds of music from around the world, I’ve always loved hearing music that can interpret cultures in a fresh and interesting way,” she says. “So that’s something that I have loved to experiment with since I started composing. It’s not just about the sitar for me, though of course that’s the instrument that I’m most comfortable expressing myself with. But I do think it’s a very versatile instrument while still being distinct, which can be extraordinarily effective and fresh when heard out of context.”
And Shankar isn’t willing to put boundaries on the direction or genre her music may tackle in the future. “I’ve learned never to say never,” she says. “I think it’s important to be open.”

Her show, “Sudakshini, a musical journey from North to South India by the Anoushka Shankar Project,” features Shankar on sitar in addition to a touring group of four musicians joining her: Tanmoy Bose – tabla, Ravichandra Kulur – flute and kanjira, Pirashanna Thevarajah – mridangam and Nick Able – tanpura. Shankar elaborates a bit more on what the show will actually be like:
“There are two forms of Indian Classical music, the Hindustani style of the north, to which the sitar and tablas belong, and the Carnatic system of the south. Normally I would explain that we will be playing North Indian music but this tour is unusual because we’re using this opportunity to explore the connections between the two and performing pieces from the South Indian tradition, that one wouldn’t normally hear on the sitar or the tablas. I’m touring with two South Indian musicians who play flute and percussion and we all have such great chemistry on stage together, so the show itself will be a new and different experience for the audience and myself.”

Anoushka Shankar performed as part of the Center Stage Series at Luther College in Decorah, Iowa.