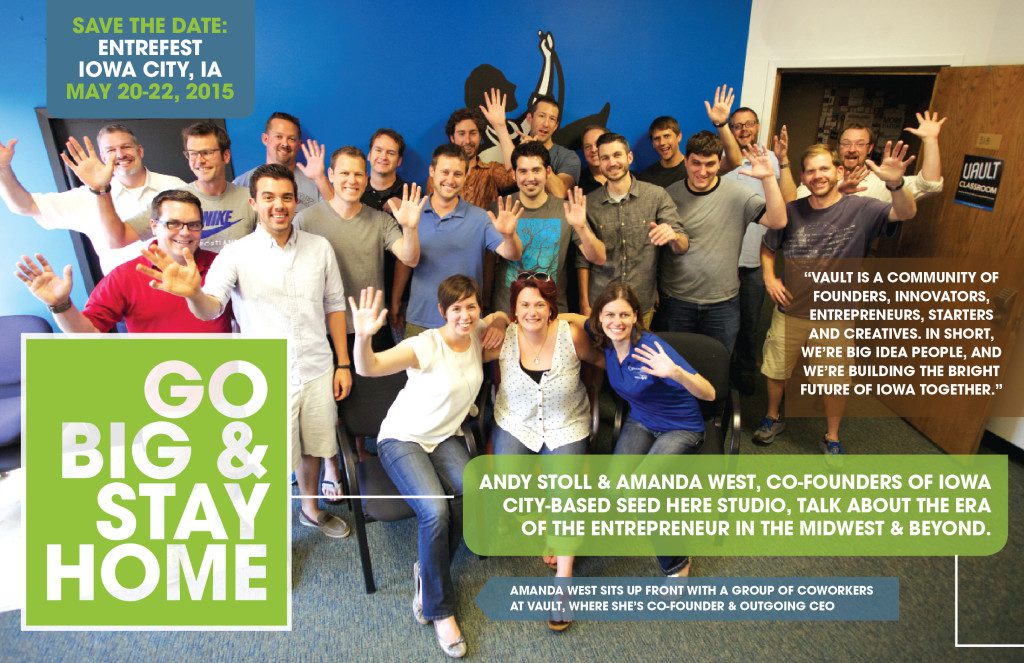 There’s a fine line between inspiration and intimidation. It’s so easy to look at super busy, super successful entrepreneurs and think, “Wow, look at them go!” And “I could never do something as awesome as that.”

There are a lot of hard parts to being an entrepreneur, but the hardest is probably mustering up the courage to take the leap. Once you’re in it, you learn, adapt, and realize that those super successful entrepreneurs – they’re just like you. They don’t have all the answers. They don’t have any special business-owner DNA. They’re just people with ideas they wanted launched into the world. (Sound familiar?)

“Our definition for entrepreneurs is: someone pursuing an idea/opportunity/passion/ambition without regard to their current resources,” says Amanda West, co-founder of Seed Here Studio and Iowa Startup Accelerator (to name just a couple). “That’s to say, people who are going for it, even though they may not (and usually don’t) have all the knowledge, network, team, or capital to fully realize the potential of their idea.”

Amanda’s co-innovator/creator/conspirator is fellow Iowa City-based colleague, Andy Stoll. In addition to co-foundingSeed Here Studio – a program design, media, and events agency with a community mission – and helping launch theIowa Startup Accelerator – an intensive program that helps take tech-based startups from concept to successful launch in 90 days – Andy and Amanda have an ever-growing list of accomplishments in both life and work. 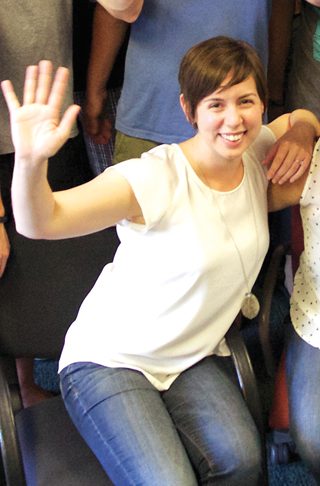 • Launched a student engagement program called The 10,000 Hours Show that went on to be acquired and expanded by United Way Worldwide
• Worked for several years post-college with Richard Florida (The Rise of the Creative Class) and The Knight Foundation to support mid-size cities around the country with their creative community building effort
• Is the current director of EntreFEST
•  Is the outgoing Project Lead for The Creative Corridor Project
• Is the co-founder and outgoing CEO of Vault Coworking – check this quote from the Vault manifesto:
“Gather your supplies, get a kick in the pants, and keep moving this city forward. We’ll grow what has been planted here, and we’ll take it to the next level. We will rebuild, reinvent and redesign and change the world in the process.” 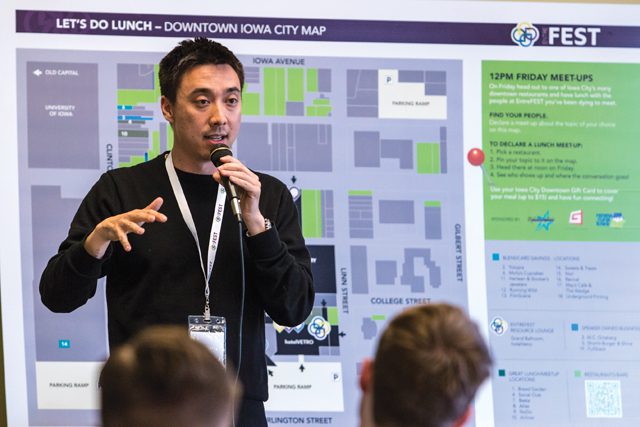 The two friends met while in college at the University of Iowa in the early 2000s. Both were part of the group of dreamers and social do-gooders that founded The James Gang, the Iowa City non-profit organization behind projects such atThe 10,000 Hours Show, Public Space One, Mission Creek Festival, the free wireless Internet in downtown Iowa City, and lots more. 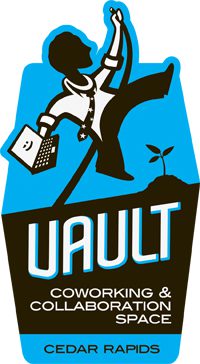 Now in their mid-30s, Andy and Amanda could easily be considered a couple of those intimidating entrepreneurs we talked about earlier. But don’t be fooled – they’re still just people. And they’re native Midwesterners, to boot, so you know they’re nice too.

“We both wholeheartedly care about our mission and try to genuinely live out our values,” Amanda says. “We share a no-holds-barred sense of possibility and have a similar eye for BIG ideas, great design, and world-class production. We also have consistently different perspectives and very different skill sets and personalities. After working together for a decade, we’ve learned to trust and respect each other’s differences.”

Teamwork and collaboration is, in fact, vital to their projects’ success. Really, Amanda and Andy believe all entrepreneurs will have a much better chance at success if they employ the skills and resources of like-minded partners.

“One of the great benefits of working in Iowa is if you want to get involved with things at the highest levels, even if you’re young or new to the community, you simply have to raise your hand, let people know, and be willing to work with it. In my experience, people will help you,” Andy says.

It’s this notion that drives the direction of Seed Here’s current focus: EntreFEST.

EntreFEST, Iowa’s entrepreneur conference set for May 20-22, 2015 in Iowa City, is geared toward small business owners, high-growth startup teams, innovators inside large existing companies, ecosystem builders…you get the picture. This year’s attendees will get to check out keynote speakers such as Jacquie Berglund (founder/CEO of Finnegans Inc.), Trevor Owens (Lean Enterprise), Ben Milne, (founder/CEO Dwolla), and have the opportunity to seek out mentors, funding, and even new team members through this networking-filled event. You never know who you’ll meet.

“I love that Iowa is a one-degree state. If you want to connect with anyone, you are not more than about one degree away. It’s easy to access the top leaders in nearly every field, industry, community, and build genuine relationships,” Andy says. 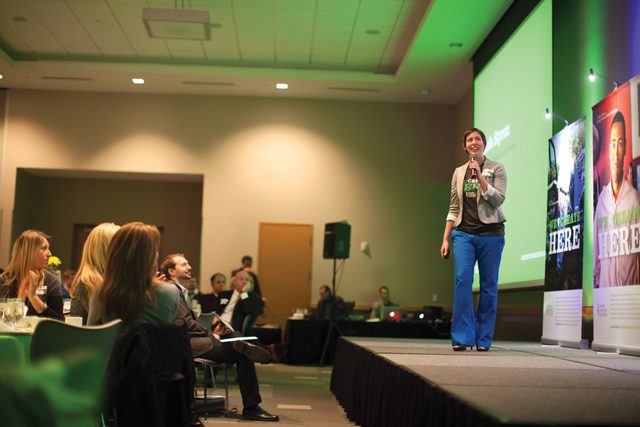 2015 marks the 8th year for EntreFEST, and the third year that Seed Here Studio’s been behind the production. In the last two years, it has doubled in size and scope (twice), with another increase of that size anticipated for this year.

It makes sense; it’s the era of the entrepreneur! Folks are taking a look at the ways we’ve done business over the decades, as well as the current issues facing our world, and thinking there must be other ways to live, work, and affect change.

“Our society is ready for and needs a fresh approach and true/big problem solvers,” Amanda says. “Couple that need with access to a global network of people, knowledge and inexpensive tools to create with, and what we get is a growing number of empowered problem solvers setting out to make the world a better a place.”

Are you one of those people with an idea you’re waiting to launch? Now is the time!

“In the past 10 years, entrepreneurship and creativity have really been democratized, especially because of technology. If you have an idea in your head of something you want to create, the barriers of entry have just collapsed,” Andy says. “It has never been easier to make an idea happen and to find a global audience. There is no better time to start than today.”

Literally, you should probably start today. The 2015 Iowa Startup Accelerator (ISA) is accepting applications through June 2. ISA is an intensive program that matches tech-based startups – especially those in ag, health, education, manufacturing and transportation technology – with world-class mentors, Midwestern work ethic, seed funding and development expertise to take them from concept to launch in 90 days.

“The application process is competitive. Only 10 teams go through the program each year,” says Amanda. “Those teams get $20,000 of investment, a network of mentors and resource providers, training in Agile project management, lots of instruction on lean startup building, and a sweet office.” 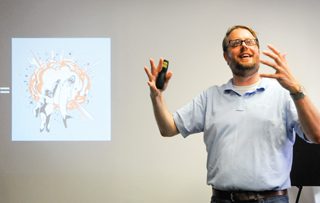 According to Amanda, the program was practically willed into existence by their friend and fellow entrepreneur Eric Engelmann (pictured at right). Engelmann founded his software company, Geonetric, in 1999 and recently made a bold move to transition his company to self-directed teams, removing all middle management.

“That freed up some time for him, and when he saw Brad Feld from Boulder talk about TechStars at an event in Des Moines, he found his next project,” says Amanda. “From there he was off like a bullet train, and it’s been an amazing ride.”

The very first round of teams went through the Iowa Startup Accelerator last year, and everyone’s expectations were met or exceeded.

“From the know-how and tenacity of Eric and our program manager, David Tominsky, to the quality of the mentors, to the progress of the businesses, to the relationships of the founders to each other, to the investments that came immediately after the program, everyone was very happy,” says Amanda.

But even if you don’t have a tech start-up idea, or you don’t want to go through the intense – albeit amazing – process of ISA, you should still “trust your crazy idea.”

“There is a growing entrepreneurial community around Iowa and if you can plug yourself into it, you will find resources, moral support, and encouragement that will help you get your idea off the ground,” Andy says. “Surrounding yourself with other entrepreneurs is the fastest way to become one.” 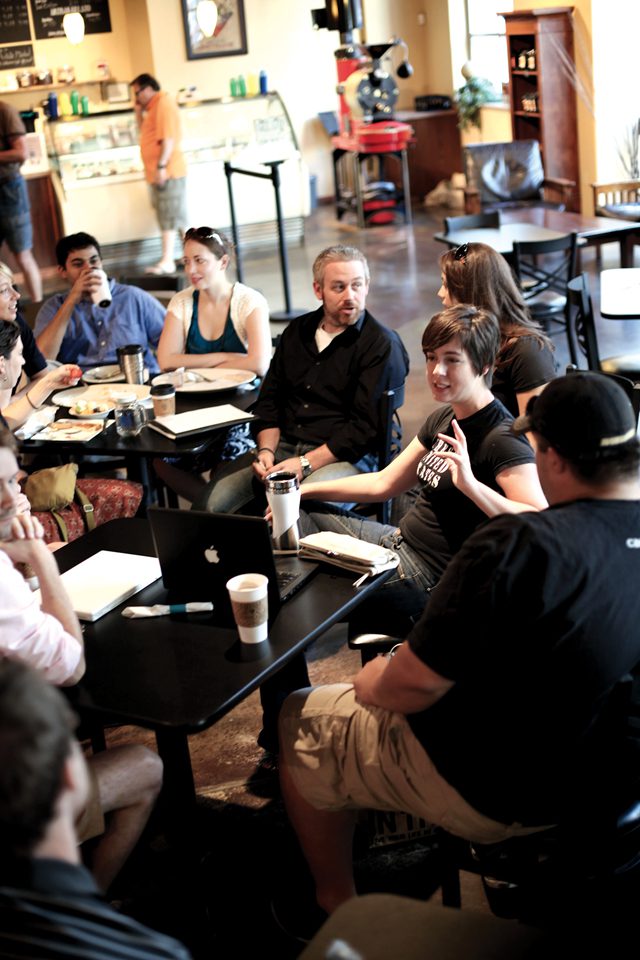 Andy and Amanda should know. Last year they had the opportunity to travel with Steve Case, founder of AOL and Revolution, through the Rise of the Rest road trip – two bus tours to nine American cities including Detroit, Pittsburgh, Cincinnati, Nashville Madison, Minneapolis, Des Moines, St. Louis, and Kansas City. They met with “hundreds of founders, CEOs, investors and civic leaders, heard dozens of pitches, and invested $1 million to foster emerging startup ecosystems in America’s heartland.”

Andy and Amanda joined Steve Case for pitches at SXSW in Austin this year, and will hop in on another Rise of the Rest road tour for 2015.

“We went across the Midwest on this tour to learn about and cheer on growing entrepreneurial ecosystems. This movement is everywhere, and the cities that will be the Silicon Valleys of tomorrow are forming right now,” says Amanda. “I see this shift as a great moment in time. It’s definitely the era of the entrepreneur/innovator/creator, and it seems we’re only getting started.”

Aryn Henning Nichols is totally agrees that it is, indeed, the era of the entrepreneur… and it’s gonna be awesome. Aryn actually knew Andy in college, and had a blast learning about all of his latest projects with his “partner-in-crime”, Amanda. See you at EntreFEST, folks?

Why you should go:
• Feedback for EntreFEST 2014 in downtown Iowa City was so positive, organizers have chosen to host an even larger version this year.
• All three public Iowa universities – University of Iowa, Iowa State, and University of Northern Iowa– have joined forces for the 2015 event.
• Iowa City is awesome.
• We (Aryn & Benji) are going to be there. (Hey, totally worth mentioning.)
• Of course, amazing keynote speakers, breakout sessions, and fun parties!

“Heard of the Midwestern work ethic? You’ll experience it first hand here at the Iowa Startup Accelerator. From the minute we hit ‘go’ we’ll all be working around the clock with you to make your business work. Make no mistake. If we pick your team, it’s because we believe in you. Be ready.” Eric Engelmann, managing director Iowa Startup Accelerator.

Tips from co-founder Amanda West for applying:
Entrepreneurs with early-stage scalable companies should apply. Last year, we received applications from all over the world, and we expect the same and more this year. My best advice to companies applying is to get a jumpstart on your customer discovery and minimum viable product. If you have a prototype to test and have already started talking to customers, you’ll stand out much more. If you can, I highly recommend you go through a pre-accelerator program like the University of Iowa’s Venture School. That program walks you through customer discovery and designing your business model canvas and serves as a great introduction. With that knowledge in your pocket, ISA can help you get much farther to launching by the end of its 90 days.