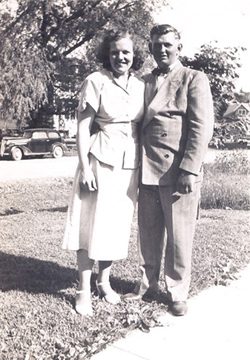 This type of interview captures remarkable things about the subject but there are still things you can’t see or hear that are very much a part of the person’s life and personality. Growing up, Grandma Jenny always had an open door and a lunch for anyone who stopped by. I have treasured memories of sitting at their kitchen table listening to Grandma’s morning voice read scripture before we headed off for our days. The buckets of homemade donuts are uncountable and the list of people who would say the same thing is long. Although she isn’t cooking/baking anymore she still has treats in her room to make sure her company is welcome and well fed.

What is the worst advice anyone gave you?

I can’t think of any dirty tricks like that.

I wanted to be a missionary way back when. But that didn’t turn out. I got married. I became a farm housewife. That is a lot work, from morning ‘til night.

If you were stranded on a desert island what three things would you want with you?

Some shelter, some food and some family member I guess.

Describe yourself in once sentence?

Probably stubborn I guess. They would call me a stubborn Norwegian.

If you could eat only one thing for the rest of your life what would it be?

Oh boy, probably something we would have for Christmas like meatballs or lutefisk. (Interviewer interjects: LUTEFISK?) Oh, not lutefisk every day. That would NOT be good.

Tell us about your wedding day.

It was the rainiest day of the year I believe. It was in a little country church in Riceford, Minnesota. No lights or anything so we had to use candles in the windows and everybody was worried we were going to burn the church down. But it turned out I guess. We went to Grandpa and Grandma Holty’s for the reception because they didn’t have lights at the church. We celebrated there with a nice supper. I can’t remember what we had but knowing Grandma Holty she made it really good.

Tell us about your first job.

I worked in a bakery for quite a few months (in the Twin Cities). I also helped out where I stayed. I helped her out when she worked at the Norwegian Newspaper up there.

What is your favorite memory?

Loren brought me a sewing chest with spools of thread and everything in the drawers. It was storming and he carried it from his home all the way to my place. His dad was upset and wouldn’t let him have the car so he had to walk all that distance in deep snow. We found spools of thread later that had fallen out of the chest. Loren was determined to get that chest to me on Christmas Eve and he did too.

Paul Hexom, a cowboy at heart, lives a life of service, laughter, and passion.