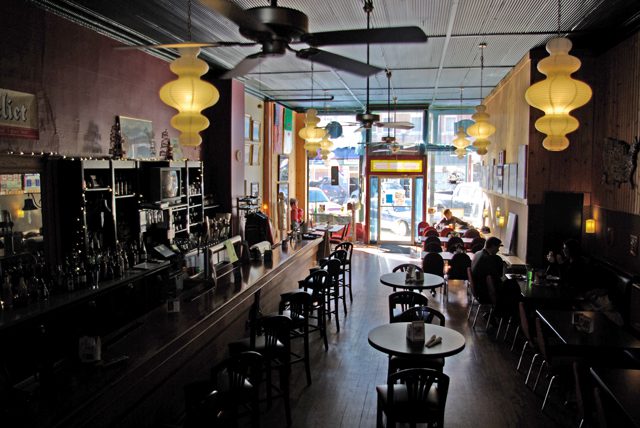 It’s a tale of two cities – Elkader, Iowa and Mascara, Algeria – and the perfect pairing of two business and life partners’ backgrounds and cuisines. Brian Bruening and Frederique Boudouani established Schera’s Algerian American Restaurant in 2006, because, as Brian says, “a restaurant gave us an opportunity to work together…and make use of our very disparate skill sets.”

Neither had a restaurant background, but they decided to take their love of food and entertaining to create this anomaly of a dining experience in Northeast Iowa. Named after the heroine Scheherazade from “1001 Arabian Nights” as well as Frederique’s sister, Schera’s features Algerian dishes right alongside classic American fare.

And they do this in a tiny Iowa town named after a North African freedom fighter. Wait, what?

Elkader, Iowa, was named after Emir Abd el-Kader, an Algerian national hero who fought against the French occupation of his country in the mid-1800s. One of Elkader’s founders, Timothy Davis, was inspired by this man and dedicated his community’s name to him. The Iowa town renewed its Algerian sister-city connection in the late 1980s, and it continues to this day. 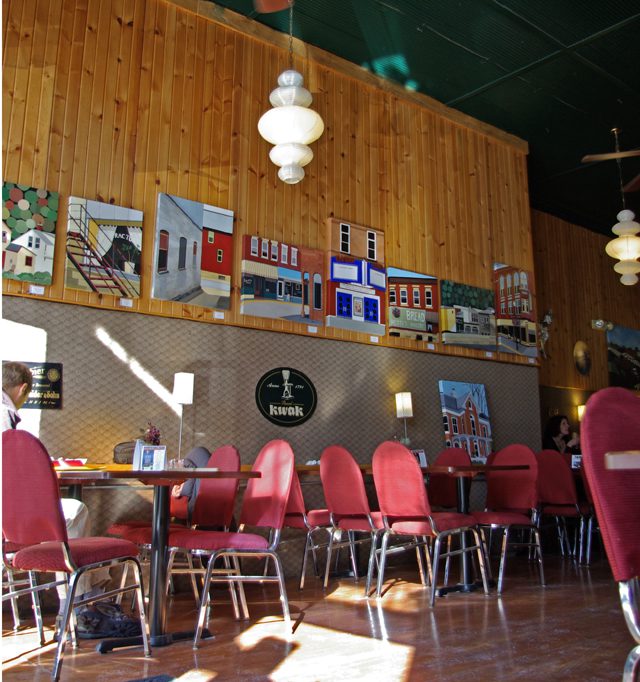 In the restaurant, paper lanterns and exotic tunes cozy up to Grant Wood-inspired paintings just as comfortably as the schawarma – a delicious gyro sandwich with seasoned slices of lamb and beef and tasty tzatziki – sits next to the sweet pepper turkey wrap on the menu. It’s important you get SOMETHING that involved the harissa – it’s amazing! We recommend the cade appetizer, a baked chickpea custard of sorts, served with bread and that yummy Tunisian hot sauce, harissa. The appetizer menu offers everything from chicken samosas to homemade onion rings, all perfect with Schera’s fabulous Belgian and local beer line-up and fabulous cocktails. Who knows – maybe you’ll even stay long enough for the late night menu… ‘cause you really should try that falafel…

Update 2015: Frederique started a new business, Abu Nawas Beverage Company (bringing wonderfully delicious beers to this area of the world), late 2011, so he’s stepped back a bit from Schera’s Restaurant. But this interview with both him and Brian is still fun to visit! 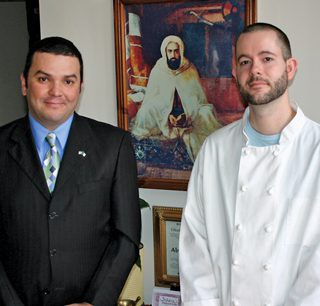 Formal training or live-and-learn?
Brian: Nothing formal. I learned to cook when I was younger because my parents are farmers and would often have little time to get something together to eat. So it would fall on us kids to get lunch and dinner together. I’m also a cookbook collector – especially from the 1950s and 1960s – so I’ve learned a lot from them.

Frederique: The School of Motherhood… I am not sure it is recognized by the James Beard Award but I truly credit all my culinary knowledge to both my mother and grandmother, in fact I still keep my mom’s number on speed dial for inspiration or if I am yearning for a childhood flavor that I am trying to replicate.

What’s your earliest or most significant memory of cooking or being cooked for?
Brian: I’ve always loved to grow things, a love I think I got from my Grandma Bruening. We had a garden and raised our own meat, so I’ve had that connection to where my food came from. It’s a logical step to move from growing food to cooking it.

Frederique: One of my fondest and earliest memories is making almond pastries before Eid, a holiday in Algerian to celebrate the end of the month of fasting. 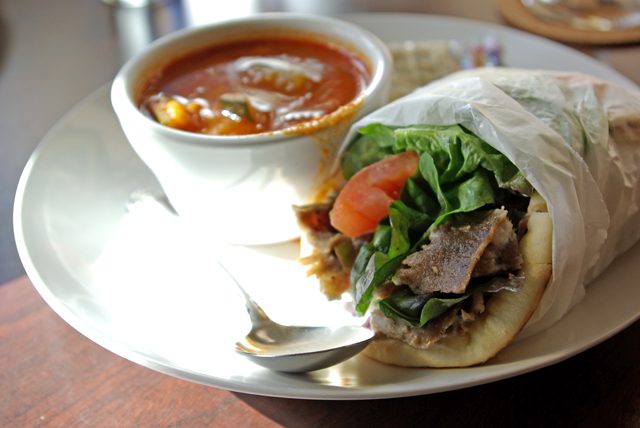 Why did you decide to become a chef?
Brian: I didn’t, it comes with having a restaurant! But seriously, I love being in the kitchen because it allows me a creative outlet while simultaneously providing a living. When I was in college, I had no idea that I would end up in a kitchen in a restaurant (or back in Iowa for that matter!), but a restaurant gave us an opportunity to work together in an environment that could make use of our very disparate skill sets.

Frederique: I don’t think I decided either. It came naturally as I always loved entertaining and sharing new flavors and stories about Algeria with friends and guests

What’s the best thing you’ve ever made?
Brian: My secret talent is for making really great soup, especially vegetarian ones, out of basic ingredients I have around the kitchen. Soup making is culinary art at its most aesthetic ­– unlike baking which is very much a numbers game.

Frederique: Harissa, a complex Algerian hot sauce that involves a slew of ingredients and a lot of love. Someone recently called having it available for sale, “a moral imperative!” lol 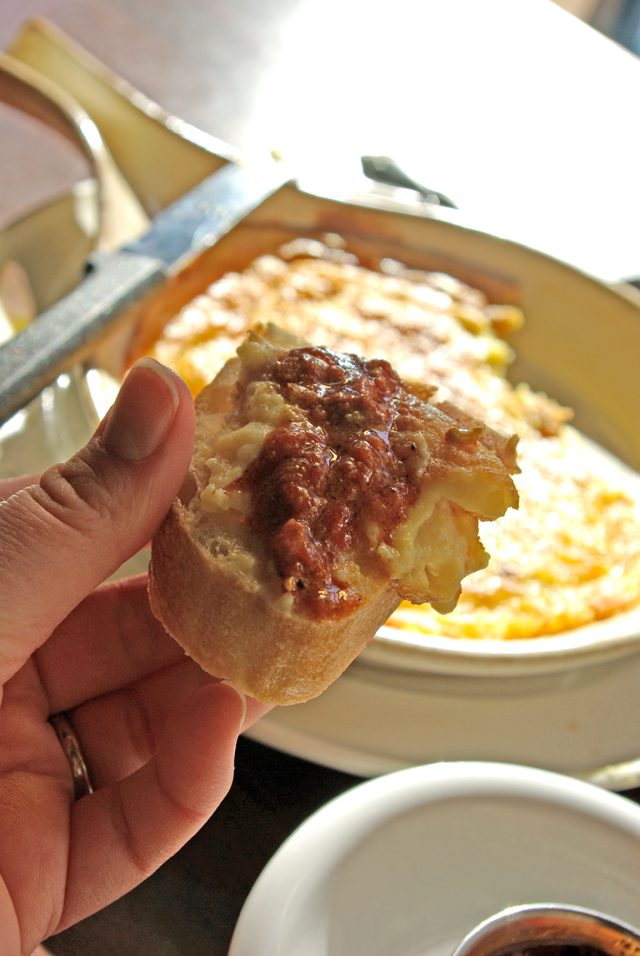 Do you have any monumental food fails you’d like to share with us?
Brian: When I was in high school, I had to make a Mexican meal for my family and report on it. I decided on breakfast and made my own chorizo. So I dutifully followed the recipe that involved something along the lines of three teaspoons of cayenne pepper to a pound of meat. The chorizo was so spicy I wouldn’t have been surprised if it burned a hole in the frying pan. Suffice to say, nobody ate the chorizo…I think we ended up eating cold cereal in the end. I learned that recipes are merely guides that need to be adjusted to your audience.

Frederique: Using too much heat spice in a soup and trying to remedy the fail by doubling the batch and before you know it, ending up with gallons of soup. So unless you are planning to feed your whole town, use heat spices sparingly. lol

How about secret food indulgences you don’t normally talk about? Will you tell us?
Brian: Sweets, especially caramels, most especially fleur de sel caramels.

Frederique: My secret indulgence lately has been Ramen Noodles, though I usually get rid of the little seasoning packet and create my own broth experimenting with new ingredients. Try it, one of the best comfort food that I can think of, and its like $.25. 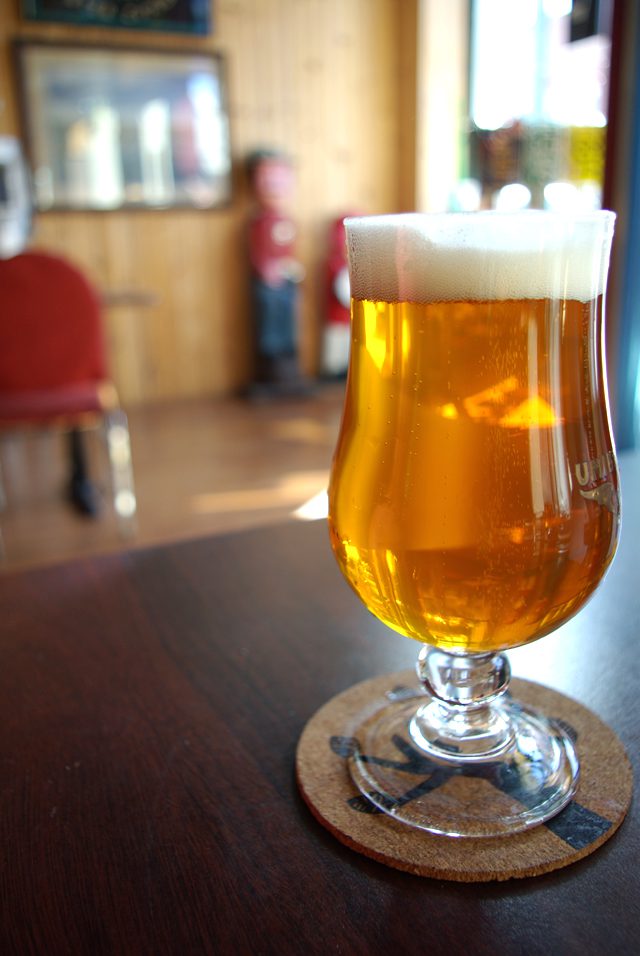 What’s Brian’s favorite…
Ingredient: Lately it’s been harissa. I often add a dab of it to soups to give it a little bit of heat and spice but if you are judicious with it, it will stay in the background and support the other flavors, especially potentially bland vegetables like potatoes and zucchini.

Dish: Scrambled eggs with garden fresh vegetables and herbs. Eggs are a perfect canvas for enjoying the bounty of the spring and summer garden.

Cookbook: Too many to list, but Martha Stewart whole oeuvre has been extremely influential to me. Both my mother and her mother never really enjoyed cooking; it was a chore that had to be done. But Martha Stewart, in many ways, was in the forefront of the movement that said it is ok to enjoy cooking and gardening and domestic pursuits. She took the Julia Child love of proper cooking technique a step forward to a love of a good domestic environment and reshaped the concept of what it meant to be a home cook.

Random (or not so random) kitchen tool: Microplane, I really don’t know how chefs managed to zest lemons and grate nutmeg before it.

Vegetable: Kohlrabi, the lovely turnip-like cabbage cousin. We always had kohlrabis in the garden when growing up. I can munch on slices of them like chips, but they are completely guilt-free.

Fruit: Clementines are the perfect portable fruit package. And they are almost always delightfully tart, which I love.

What’s Frederique’s favorite…
Ingredient: Cinnamon, Black pepper, and onions, the Algerian culinary trinity, as it is often the beginning common denominator to Deliciousness.

Dish: Couscous, not only the National dish of Algeria but of the Whole Maghreb (North Africa). It is an amazing experience to try different couscous in different places as it is in my mind almost an anthropological study of the region.

Cookbook: An old family heirloom Algerian cookbook that I had to fight my siblings very hard for, some serious diplomacy and concessions where used to attain it. lol

Random (or not so random) kitchen tool: Pestle and Mortar, my favorite alchemist tool. It’s like you are working on some magical elixir.

Vegetable: Eggplant, it is truly one of those amazing discoveries that tradesmen brought back from the spice/silk routes. It went global after that with each culture adopting it and giving it its own twist.

Fruit: Pomegranate. Although it is just hitting prominence in the US, it has been considered the fruit of Gods in many ancient cultures. It keeps showing new health properties each time a new study is done. I find it almost therapeutic as you go through the long process of seeding the fruit, till you get to the prized juicy seed. It also makes for a delicious Martini. 🙂