Winter. Gah! Lots of us want to just burrow under the covers and stay there until the snow has passed. But sadly, that’s not a reality for humans (foiled again!). For some creatures, though, it’s perfectly normal to spend the cold, dark season curled up in the fetal position (okay, super deep sleep). Not because they hate winter, but because food is scarce, making it necessary to reserve energy so they can make it out alive. These creatures hibernate. (1)

There’s a debate about whether certain animals hibernate or actually go into torpor. Hibernation is a long-term state in which body temperature is significantly decreased, metabolism slows drastically, and the animal enters a sleep so deep that would take some time to recover if woken. The black bear’s body temperature, for example, only drops a few a degrees, so many might define that as torpor

Torpor is sometimes used as an umbrella term to describe all the various – big or small – types of temperature- and metabolism-reducing functions. (2)

For the sake of simplicity (and because it’s more fun to say), we’ll just call it hibernation in this story.

Hibernation is not really sleeping at all. As we already mentioned, there are some major physiological changes a body must go through to achieve hibernation:

Those physiological changes are controlled by the endocrine system. This system runs the glands in the body that adjust the amount of hormones being released. The

thyroid gland heads up metabolism and activity levels, the hormone melatonin controls the growth of winter coats, the pituitary gland maintains fat build-up, heart and breathing rate, as well as metabolism, and, finally, the hormone insulin regulates the amount of glucose (sugar) needed by the animal (1)

While in hibernation, the temperature of a mammal’s habitat will affect its body temperature – much like a cold-blooded animal. But there is a minimum temperature, known as a set point, which acts like a sort of alarm system. When the creature’s body temp reaches the set point, metabolism turns up and burns fat reserves, which creates energy that is used to heat systems back to the set point. (1)

But what about when they have to go…you know? Interesting fact: Bears don’t urinate all winter. They break their urea down into amino acids. And even though they don’t drink, they don’t get dehydrated either. They’re able to extract enough water from their own body fat to stay hydrated. (3)

Although humans don’t hibernate, a nice long sleep (but not too long) is full of benefits for us as well:

So while it’s impossible to sleep the entire winter away (and you shouldn’t want to – there are lots of great things to do this winter for you – check out page 34 for ideas), taking advantage of the longer evenings with an extra hour of sleep is a great idea. They don’t call it beauty sleep for nothing!

Check out the Hibernation Infographic below for more amazing stuff about hibernation, the creatures that do it, and what we humans can gain from some more sleep as well. Zzzzzzzzz… 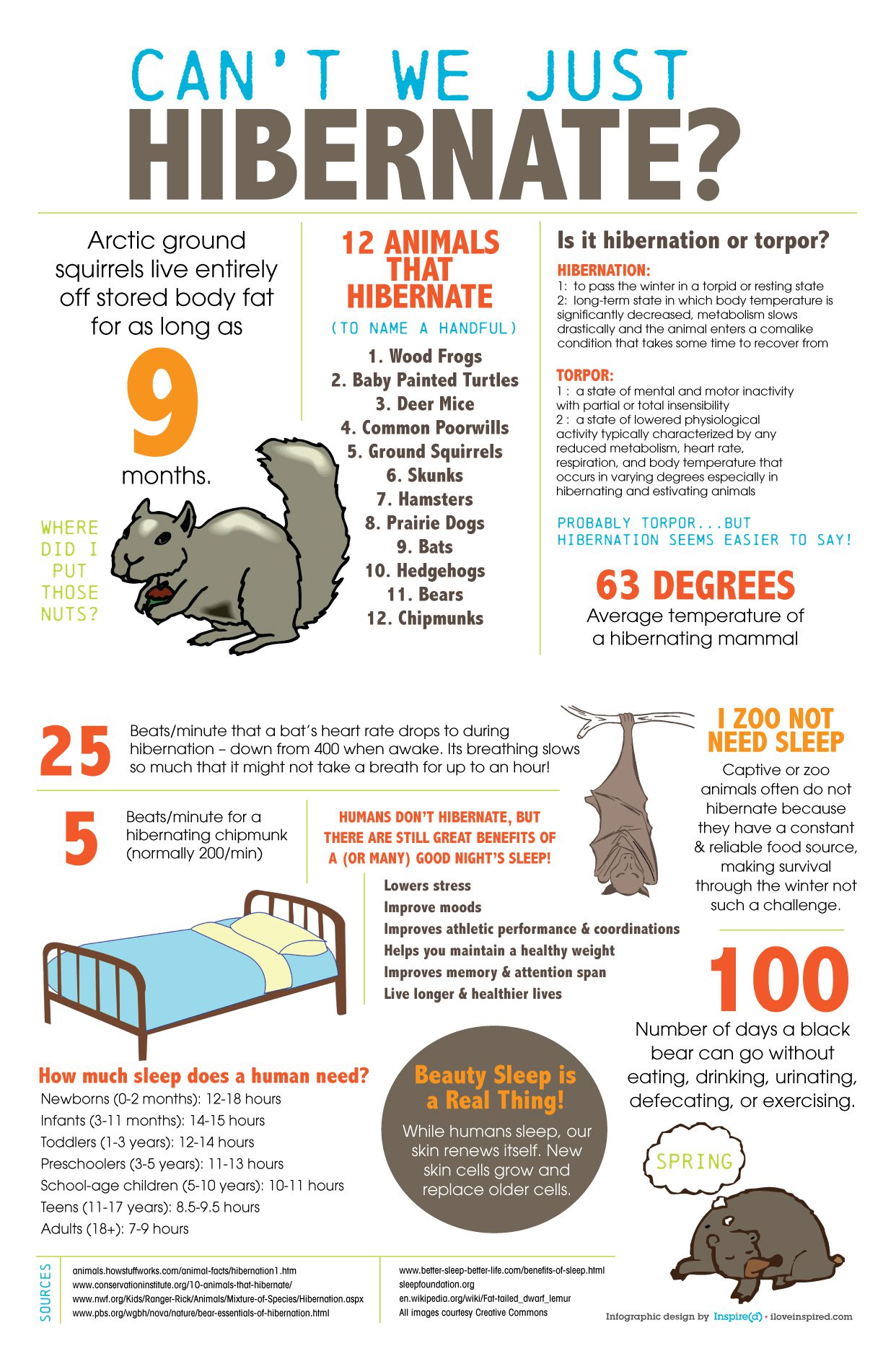