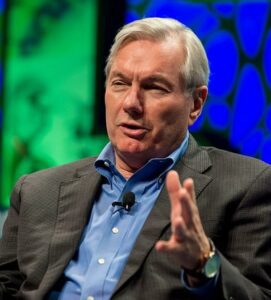 Perhaps you’ve seen his name in the news: Dr. Michael Osterholm. The nationally renowned epidemiologist has been quoted or published in media outlets across the nation – from New York Times to Oprah – in regards to COVID-19 and other epidemics and disease-related news. He’s one of the many scientists who have been busy studying, researching, reporting facts, and trying to help the world deal with this outbreak.

And he happens to be from Northeast Iowa.

Dr. Osterholm is a Waukon native. He graduated from Waukon High School in 1971, and got a degree in biology – and a second in political science – from Luther College in Decorah in 1975. He then went on to earn two master’s degrees from the University of Minnesota and, finally, a doctorate in environmental health in 1980. After working at the Minnesota Department of Health as a graduate student, then as Minnesota’s state epidemiologist for 15 years, he eventually founded the Center for Infectious Disease Research and Policy at the University of Minnesota in 2001, which he continues to lead.

But how does one follow that path from Northeast Iowa? Epidemiology isn’t a profession you see on a regular basis around here.

According to Dr. Osterholm, epidemiology is basically “medical detective work,” and it’s something that has intrigued him ever since junior high (you’ll hear more about that below). Despite his fame in the field, and now, in the nation, he’s maintained his Midwestern accent and mannerisms – he even thanked me for my time, when he was clearly the one with a tighter schedule. He only had 15 minutes to spare for this interview before Zooming in on at least three more talks that day.

Read on to see all the topics we crammed in to that quarter of an hour – Dr. Osterholm’s background, Zoom sessions, thoughts on COVID-19, and how he likes to keep in touch, even through a pandemic.

Why did you decide to get into epidemiology?

What happened was I had a close relationship with the woman married to the owner of the Waukon Newspaper, Laverne Hull. She was a real renaissance of a woman. She worked at the newspaper – really, she was part owner too – was multi-lingual – spoke French and English – had a masters in journalism, and subscribed to the New Yorker. She was someone who had a major influence on my life. She would give me these New Yorkers when she was done reading. There was a series of articles in there called the “Annals of Medicine” by Berton Roueché. And Berton Roueché was someone who was a constant storyteller. He would take these outbreak investigations and write them up as kind of “who done it” stories. I loved reading these, even when I was in seventh and eighth grade. Whenever she would get done with a copy, I would quick run and get it. So I even knew back in junior high that I wanted to be a medical detective. So that’s what I pursued.

Has it been as exciting as you thought it would be in seventh and eighth grade?

I had no idea – it was one of those things. It’s like me asking you what your life’s going to be like when you’re 60. It’s just one turn after another. The thing that was most remarkable is that Berton Roueché actually wrote up an outbreak investigation that I led in Southwestern Minnesota back in the 1980s. A thing called thyrotoxicosis, and it was his very last story he wrote before he died. I was able to tell him how he influenced my life, and say “thank you” for all he did for me.

And now we have COVID-19, a type of virus you predicted would happen in our lifetime in your 2017 book, Deadliest Enemy: Our War Against Killer Germs. Realistically, how long do you think we’ve got to go before we can be together again, COVID-19 carefree?

What are some things we can all do in order to get there faster?

So, it’s all about distancing, which is a very hard thing to get across to people. You know, it’s basically sharing the air with someone, someone who could be putting the virus out into that air. When you’re indoors, it’s very difficult to distance. Outdoors is easier, but it’s still a challenge.

Masking is something everyone should do. I think anything we can do right now to minimize the risk of transmission, we should consider. We still don’t know how well it works; it’s likely just a thing that’s another layer, in effect. Distancing is still by far the most important thing you can do, but also just being aware of being in crowds – in the sense that it’s not just how far away you are from someone, but if I go and spend three hours indoors and I’m more than six feet away from someone, that doesn’t mean that I’ll be safe there. We have many outbreaks right now – bars and restaurants, funerals, weddings, family reunions, school-based activities that are indoors. All of these have led to big outbreaks, right here in the Midwest.

There’s nothing magical about 10. It’s more about who your bubble’s with. For example, my partner and I are very bubbled together. So, you know, we can do whatever we want. People who are living together in one building – they can get together pretty routinely if they don’t have outside contact.

I don’t think there’s been a time in my adult life when social closeness has been more important. So I make sure I see my kids on a weekly or bi-weekly basis and be with them outdoors. I’ll give them each a 30-second hug, then back away at that point, and maintain at least a 10-foot distance outdoors. I go out for walks with my partner frequently in a park near where I live, and feel very comfortable holding her hand as we walk around the park and just staying, you know, at least 10 feet away from everybody outside and I don’t have any concerns at all.

Along those lines, how do you keep in touch with your relatives who are far away? Do you Zoom with them?

I Zoom with them a lot. And for work, too. I work with more than 30 people with our center, and we have our routine Zoom calls. I will often spend eight to 10 hours a day on Zoom.

Whoa, that’s got to be exhausting.

Yeah, it is. I mean, I’m giving a talk here in just a few minutes, and this will be my third talk of the day. And I’ve got three more to go yet before I’m done.

Yeah, you are highly sought after, I imagine.

Well, I can’t say that (laughs). Everything is virtual for me now. I haven’t left Minneapolis since March, which is a big change for me. I’m usually a 200,000-mile-a-year flier, but I haven’t been on a plane since March.

Do you miss it?

Ah, you know… I don’t. I miss the contact with all my friends and family that I once had, but I think travel is something you realize – once you’re not doing it – what it feels like to get off the gerbil wheel.

The theme of this issue of Inspire(d) is “Look for the Bright Spots”. Have you found some bright spots to these past months? Any you could share?

You know, I do a weekly podcast, The Osterholm Update: COVID-19. And with that, we have many thousands of people who download it and listen to it each week. The response we’ve gotten from this podcast… the feedback has been nothing short of remarkable. And it’s been a really positive thing to see all the acts of kindness that people do and follow up on. So I have to say that has probably been one of the really special things. There have been so many people that have done so many kind things. I think that we must not forget that despite what’s going on with this virus right now, there’s a tremendous amount of good in the world.

Find the Osterholm Update: COVID-19 podcast at www.cidrap.umn.edu/covid-19/podcasts-webinars or on Apple Podcasts, Spotify, Google Play or on YouTube.