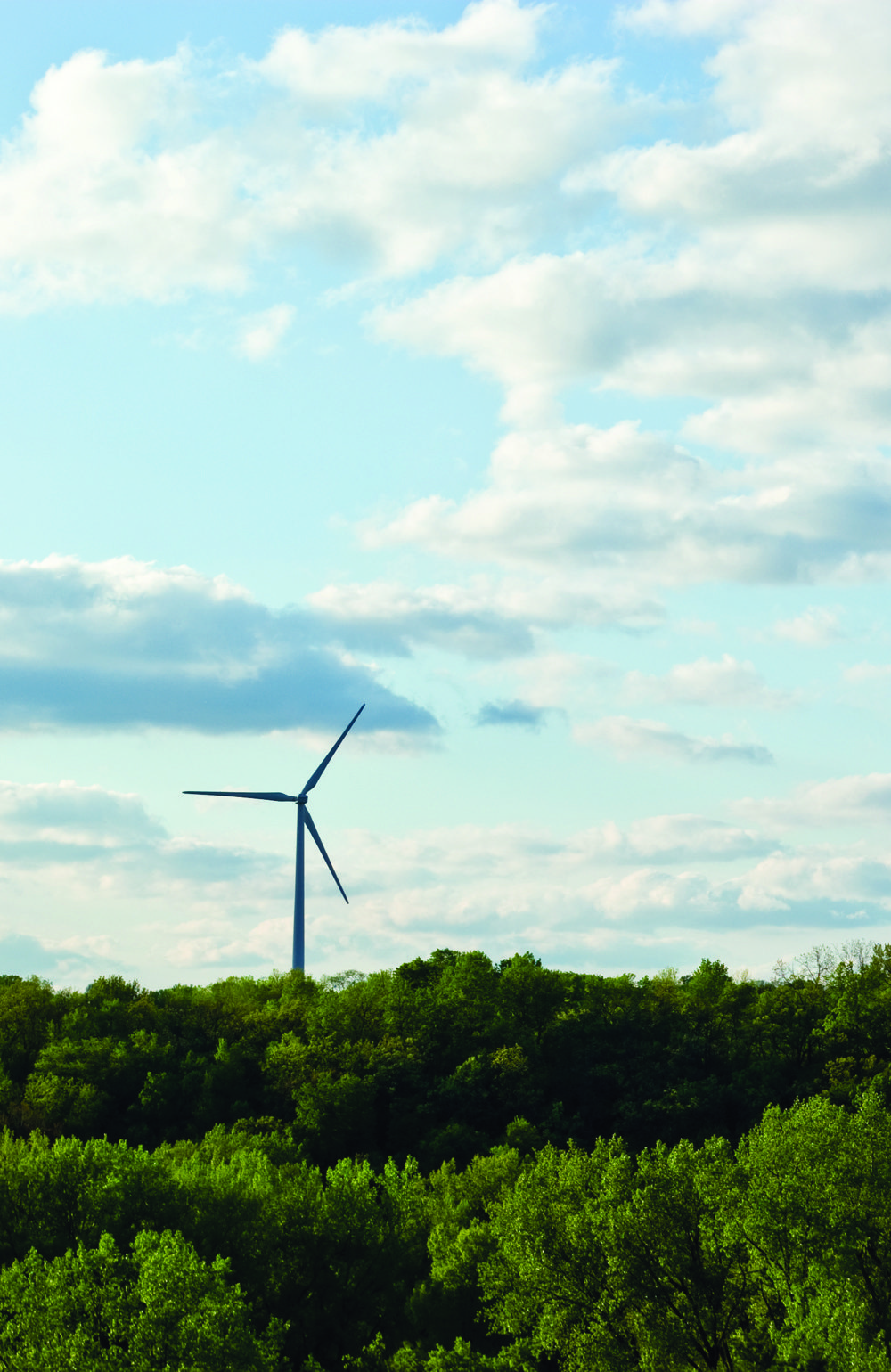 When air moves quickly, a.k.a. it’s windy, the particles that make up the air are also moving quickly. This motion, like all motion, is kinetic energy, which can be captured by the turbine – just like the energy in moving water can be captured in a hydroelectric dam setup. But how, exactly, do wind turbines make electricity? Simply stated, the wind turns the blades, which spin a shaft, which connects to a generator and makes electricity. (1)

But it’s not QUITE so simple.

Jim Martin-Schramm, Luther College professor and the coordinator of Luther College’s wind-turbine project, explains further: “The heating and cooling of the Earth causes wind on the surface of the planet. Air moves from high pressure areas to low pressure areas and is affected by the rotation of the planet. Wind turbines convert the kinetic energy of the wind first into mechanical energy. That is, the turbine’s blades harvest the kinetic energy of the wind and transfer it into the mechanical gearbox up in the nacelle (a box at the top) of the turbine. The mechanical energy from this gearbox spins a shaft that turns a generator to produce electrical energy. That electricity is converted to alternating current at the base of the turbine and then a transformer converts the electricity to the desired voltage for distribution or consumption.” (2)

The bigger the wind turbine, the more wind it reaches and the more electricity it makes. Wind turbines used for large-scale wind farms come in varying sizes, but are usually approximately 13 feet wide at the base, and between 230 and 265 feet tall at the hub. With one of the blades upright, the total height is approximately 406 feet. (4) If you’ve ever seen one of these blades being transported via semi or train, you can really get the scope of the length of these things – they’re huge!

Iowa ranks second in the nation for wind energy production – there are nearly 3,000 utility scale wind turbines here, which create enough electricity to power 1,000,000 homes. Minnesota is fourth in the nation and Wisconsin is 19th. (4)

In Decorah, the addition of the Luther College wind turbine has fanned (pun intended) a debate on various topics where giant windmills are concerned. Martin-Schramm answers a few more Inspire(d) questions to fill us in on the details. (2)

Why do turbines sometimes not turn? Isn’t there always SOME wind? And what about really windy days when they’re not running?

Most utility-scale turbines do not start turning until the wind is blowing at around 2.5 – 3.0 meters per second (m/s), which is around 5-7 miles per hour (mph). The rotors are very heavy, so it takes a little bit of wind to get them moving. Luther’s turbine starts turning at 2.5 m/s and has an electrical cut in for production at 3.0 m/s. As the winds grow stronger the blades turn faster to harvest more of the kinetic energy of the wind. Luther’s blades rotate between 9-18 revolutions per minute. The turbine reaches its rated capacity of 1.6 megawatts or 1,600 kilowatts when the wind is blowing around 25 mph. When the wind reaches around 55 mph the turbine will automatically feather the blades into the wind, slow down the rotor, and then lock the blades in place to protect the turbine from damage in a high wind event. Finally, there are times when the turbine is not operational due to scheduled and unscheduled maintenance. Luther’s turbine has been up and operating about 94 percent of the time thus far. GE’s goal is at least 96 percent availability. We’re confident we will reach that goal after some of the bugs are worked out over the course of this first year of operation.

How many turbines would it take to power everything in the world, do you think?

A lot. We will need far fewer turbines, however, if we first make major investments in energy efficiency. Luther invested $1.5 million in 2004 and cut our electricity consumption by 23 percent. We continue to make investments in energy efficiency today. On average, the U.S. uses twice the amount of energy that Europeans do to produce the same amount of goods and services.  There is huge potential for energy efficiency here. Also, various studies indicate that it should be possible for wind energy to produce at least 20 percent of the U.S. electricity supply by 2025. Already 20 percent of the electricity generated in Iowa is produced by wind turbines, but most of it is shipped on high voltage wires to out of state electrical markets.

What about the negative stuff people talk about: shadow flicker, low-end noise, the potential harm to birds, etc. Does any of this hold water in your book?

Shadow flicker, noise, and wildlife impacts are real issues that need to be taken very seriously. When turbines are properly sited, however, these dangers can be mitigated to a very high degree. Luther conducted shadow flicker and noise studies as part of its siting process and received a “Finding of No Significant Impact” at the end of that process. It is the case wind turbines kill some birds and bats, but there are several other causes of avian mortality that take a far greater toll.  The key it to site and space turbines in such a way that these impacts are lessened.  The U.S. Fish and Wildlife Service has worked closely with the U.S. wind industry to develop a new set of proposed siting guidelines and standards.

The “Science, You’re Super!” segment is a regular feature in Inspire(d) Magazine… we bring you this seasonally appropriate feature on Garlic! 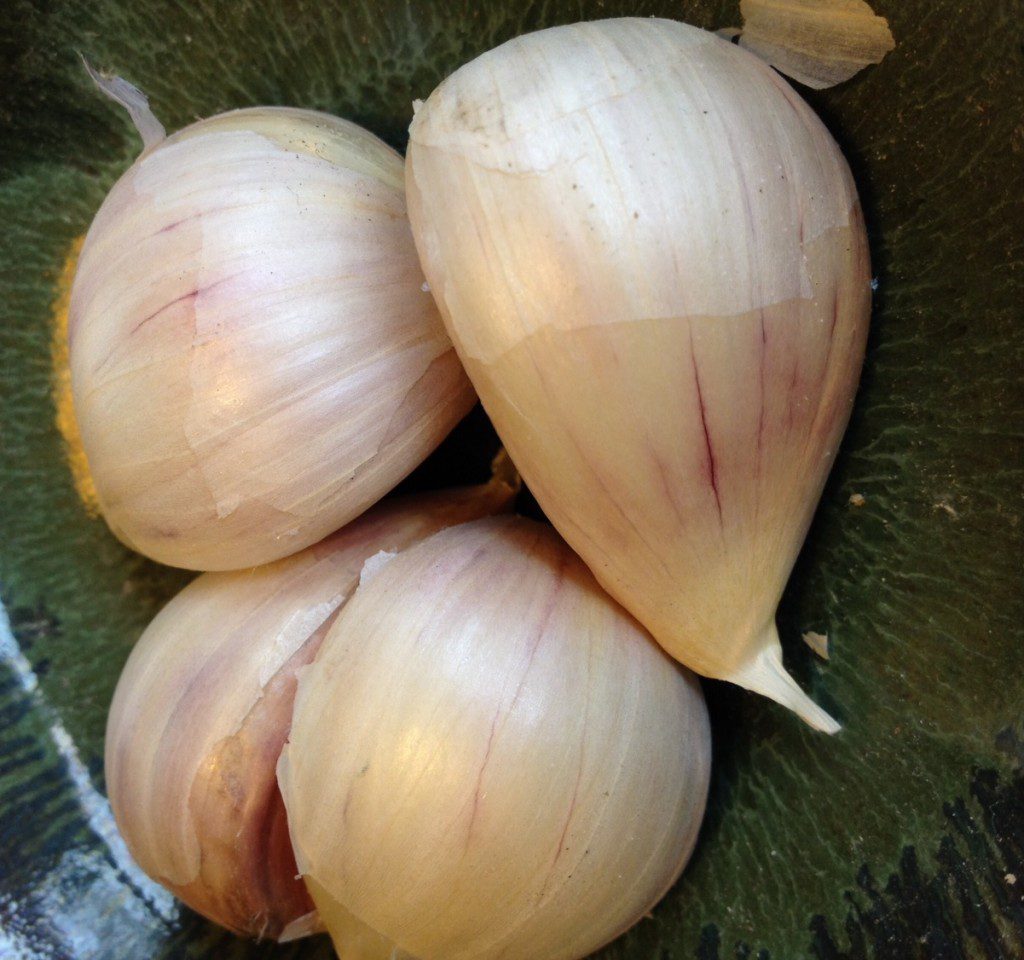 Garlic sure has been purported to have a lot of uses: it can apparently cure the common cold, prevent heart disease, and keep vampires away. All I know for sure is it can make my food DELICIOUS! I love crushing fresh cloves with the flat of my knife and mincing them into most all of my savory dishes. So it’s handy we inherited a pretty large patch of German Extra Hardy garlic when we moved into our house several years ago (thanks, Rhodes’!). Every summer, we pick out the biggest heads out of the harvest – and there are some giant ones – to be planted that fall, and every year, without fail, I marvel over the fact that one little clove turns back into a whole head garlic. Magic! Science!

Interesting garlic facts: China definitely wins the garlic growing contest, with approximately 23 billion pounds grown there annually – that’s more than 77 percent of world output! The United States (where garlic is grown in almost every state) is in sixth place with a sad 1.4 percent of the world’s production. And most of THAT is grown in Gilroy, California, the “Garlic Capitol of the World” (they might need to rethink that title…)(1) 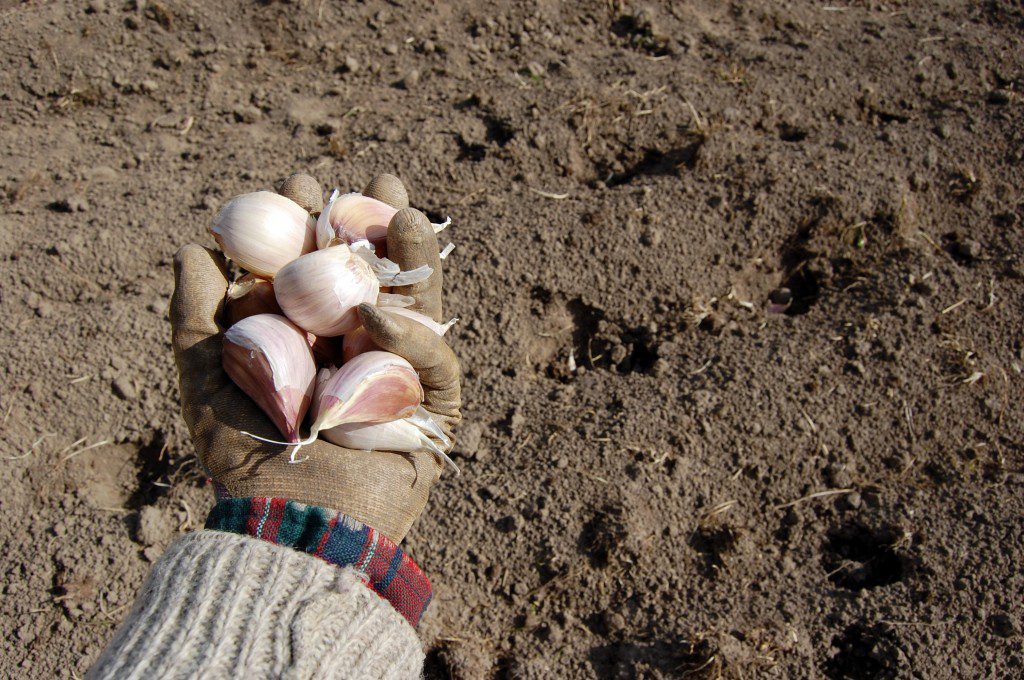 Garlic is generally propagated by planting cloves, which are the small sections that are broken out of the whole head. Each large garlic bulb, or head, contains about 10 cloves, depending on variety. The bigger the cloves you plant, the larger the cloves and heads you get at harvest. (2)

It’s time to harvest when the tips of the leaves become partly dry and bend to the ground. The bulbs are gently pulled and gathered to dry (or cure) for about a week. (2)

But how, exactly, does that head of garlic form? We turned to Seed Technician Heidi Cook at the world-renowned, but local-to-us Seed Savers Heritage Farm for some answers.

How does that one clove of garlic magically become a whole head of garlic under ground?

Within each clove of garlic a leaf begins to form even before planting. At the base of this leaf, tiny cloves begin to develop and in spring they continue to grow or swell around the stalk. Essentially each clove is but a tiny garlic plant. It is a common misconception that the bulbs form cloves later in the season but they actually begin to form even before planting.

I read that garlic actually does better when it’s planted close together? Is this true? If yes, why? 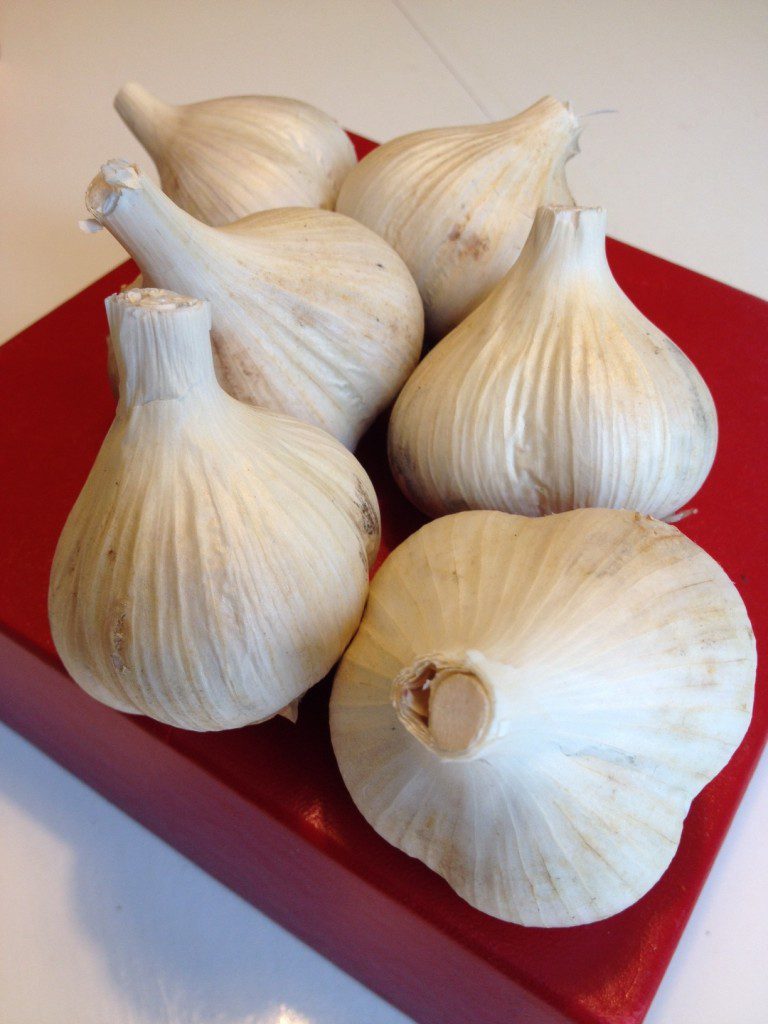 Planting garlic cloves 6 to 8 inches apart, depending on the variety, can allow the bulbs to grow to a desired size and aid in the care they need to be given, from the gardener, as they grow. Having a layer of mulch on the beds will help in the spring and summer for suppressing weeds. A weedy bed of garlic will result in an undesirable harvest as garlic does not compete well with the weeds.

Why does garlic need to be exposed to colder temps in order to form bulbs in the spring?

Garlic should be planted roughly four to six weeks before the ground freezes. This allows the garlic cloves to develop a good root system and yet not enough time to send up leaves. If leaves emerge before winter it can damage the plant so waiting until October to put your cloves in the ground would be a fine recommendation. The soil around the garlic cloves and a good layer of mulch over your planting will allow protection from cold winter temperatures. The period of cold over winter is ideal for encouraging a better flavor for the garlic.

What’s the difference between hardneck and softneck garlic? What works in the Midwest? 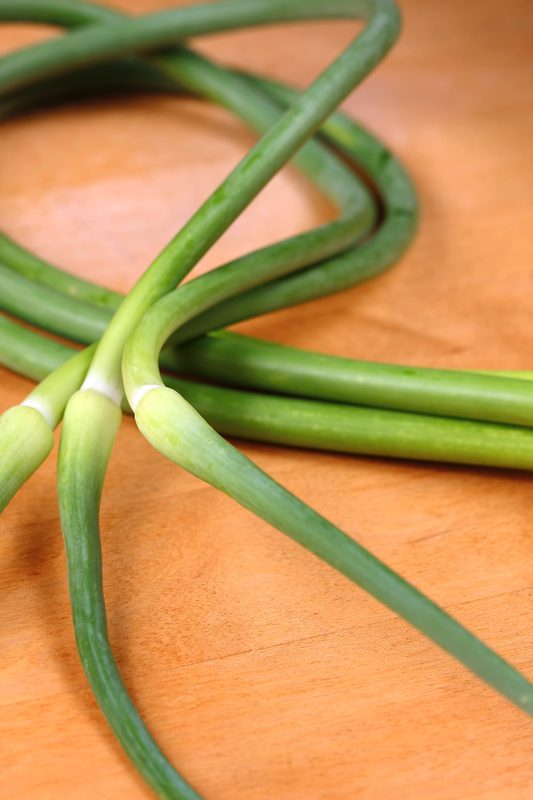 The Midwest can be an ideal area to grow large, vigorous, and tasty cloves of garlic. Garlic is divided into two main types by how they grow. Hardnecks varieties are directly related to wild garlic and are especially hardy in this area. These send up flower stalks in the spring which are more commonly called scapes. Breaking off these scapes as they begin to curl will allow the energy to be directed below ground and at harvest time the bulbs will be larger.
Softnecks are varieties of hard necks that developed later. In our climate, soft necks generally do not send up a flower stalk so the energy to produce the bulbs is continuously directed to creating larger cloves of garlic. They have become the most commonly grown varieties on the market as they are known for their longer shelf life, bulb size and more distinct hot or mild flavor.

What do YOU love about garlic?

Garlic is a very easy and satisfying plant to grow. It requires little maintenance and at harvest time it gives a great reward. It can be an extension of off-season garden work for an avid gardener giving the grower one last shot before winter to work in the garden and an early harvest reward for the following year. There are many different varieties all unique in flavor and use. I like the hardneck varieties because the scapes are yet another tasty addition to my garden.

Seed Savers Exchange offers a nifty pictorial guide to growing garlic – they also sell over a dozen varieties of garlic (they all taste amazingly different!), but supllies often sell out quickly. Start checking by early July and plant in late fall for a summer harvest!