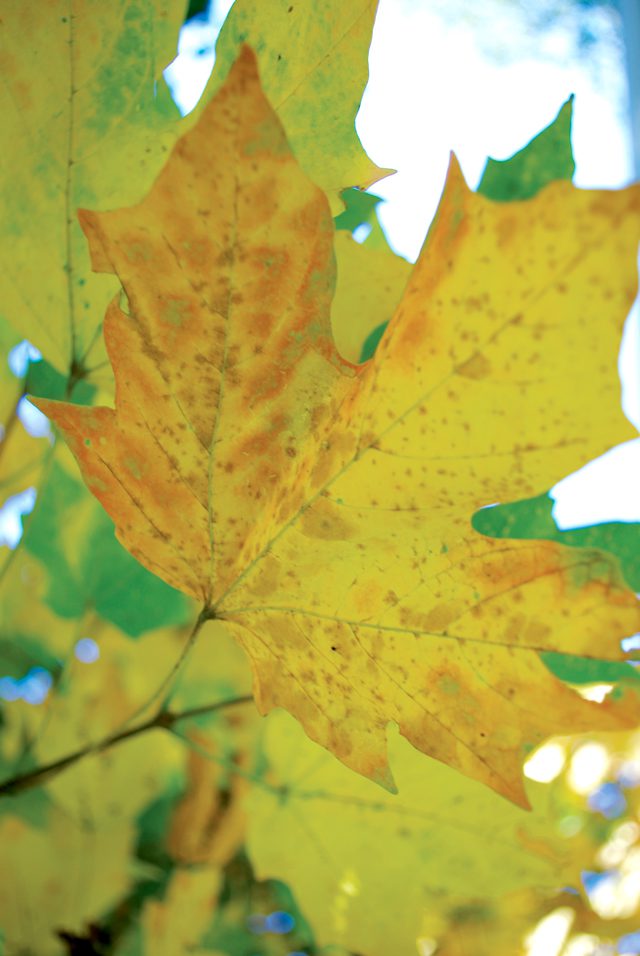 Why do leaves turn colors in the fall?

As you well know, we are lucky enough to live in a part of the country that gets to experience the brilliant fall foliage of deciduous trees. And as most know, the season for fall colors can vary greatly with any given year – but do you know why? And for that matter, why those crazy green leaves go wild colors in the first place? Let us explore…

First, there are three types of pigments found in leaves:

These also help support other functions of the trees and their chemical reactions and systems. All three can be found in leaf cells through the growing period, but throughout the season, chlorophyll is continually made and broken down by the trees, giving leaves a green color. When the fall nights begin to get longer, chlorophyll production slows and eventually stops – since there is a less light to power photosynthesis (…that’s how a tree eats… wait for it…). Meanwhile, the carotenoids and anthocyanins are still present ­– have even increased as excess plant sugars exist with the slowing of photosynthesis – and they begin to show their colors.

Think of it like this: trees have two ways to receive nourishment during the growing season. First they sip up water and minerals through their roots in the ground. Second, they absorb carbon dioxide from the air. Both of these systems are necessary for the tree’s leaves to absorb the sun’s energy and make sugar (to eat!) from all of the goodness it absorbs (photosynthesis!). But as fall approaches, trees shut off or seal up their root lines in order to survive the winter. As that happens, chlorophyll (green!) dies off and allows the other pigments to show their colors (reds and yellows!). Eventually, these too lose their ability to survive and the leaves turn brown and fall from the tree.

Easy, right? But why then does fall foliage vary so much from year to year, you ask?

There are three factors that mostly control the ever-regal turning of the leaves.

First, the pigments above, which we’ve already covered. Second, the length of nights (or lack of light), and third, the weather (kind of, well, wait for it…). The calendar primarily shows when the length of days will start changing the leaves from lack of sunlight – and this really is the most predominant factor in the process. However, nice warm days help produce lots of sugars in the golden fall daylight, while crisp autumn nights (but not freezing!) keep the trees root veins slowly closing up for the winter, keeping more sugars in the leaves. There are lots of other factors like soil moisture, what the growing season conditions have been like, and what kind of nutrients the tree has access to. In general, a warm wet spring, pleasant summer weather, followed by light-filled fall days with crisp nights can produce the most brilliant autumn colors. But a warm snap in the fall, or an early freeze, or a big rain at the wrong moment can easily bring the big show to an end. After all, nature is beautiful, but certainly not predictable, and no two seasons are ever alike!

Benji Nichols is in continual awe of just how super science can be. He has also been known to hug a tree now and again. Here’s to hoping for a great fall foliage season –big hugs all around!

Ever wondered what falls into the gourd family? How about the history of gourds? We wondered! The result, was, of course, an infographic! Enjoy! 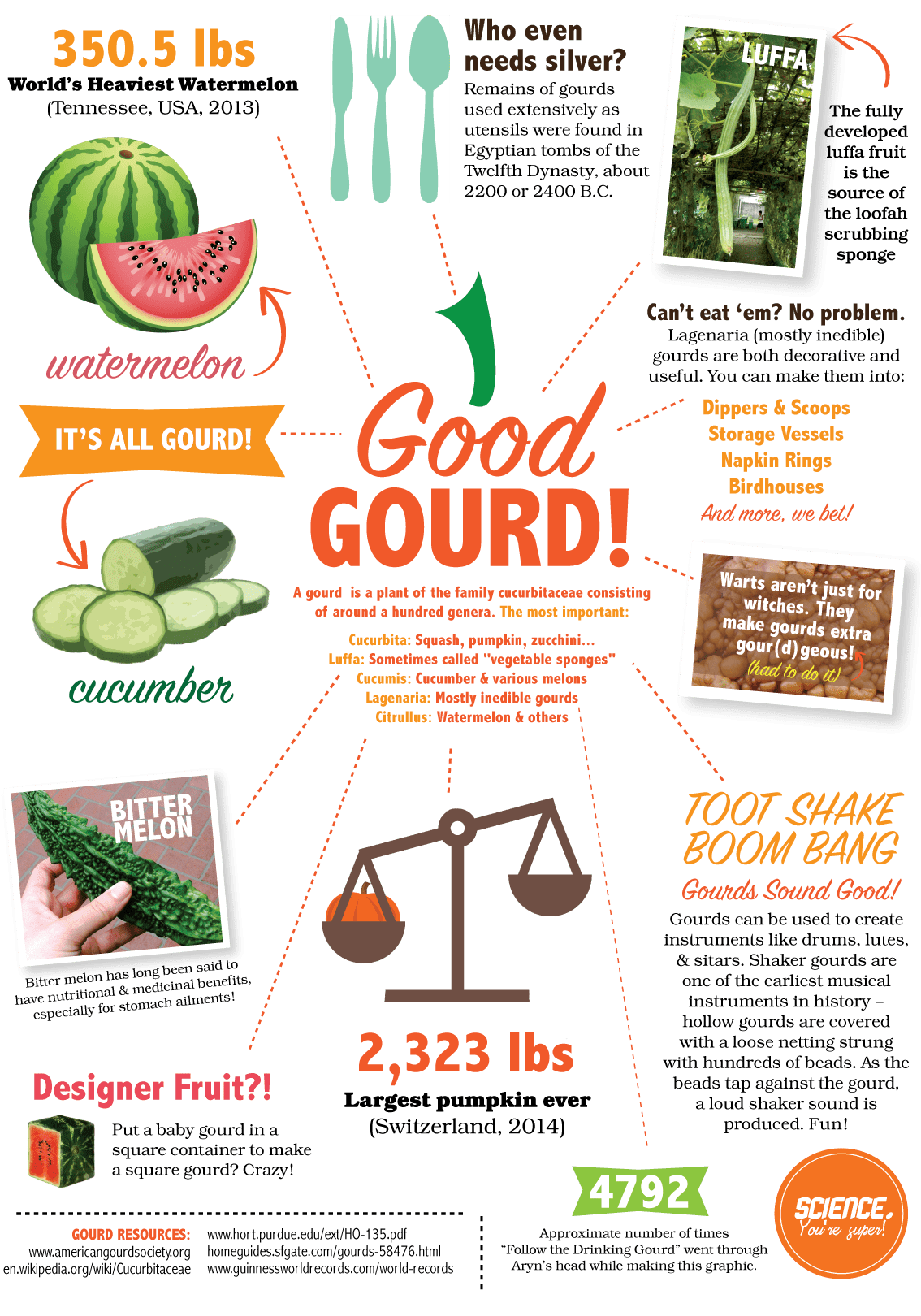 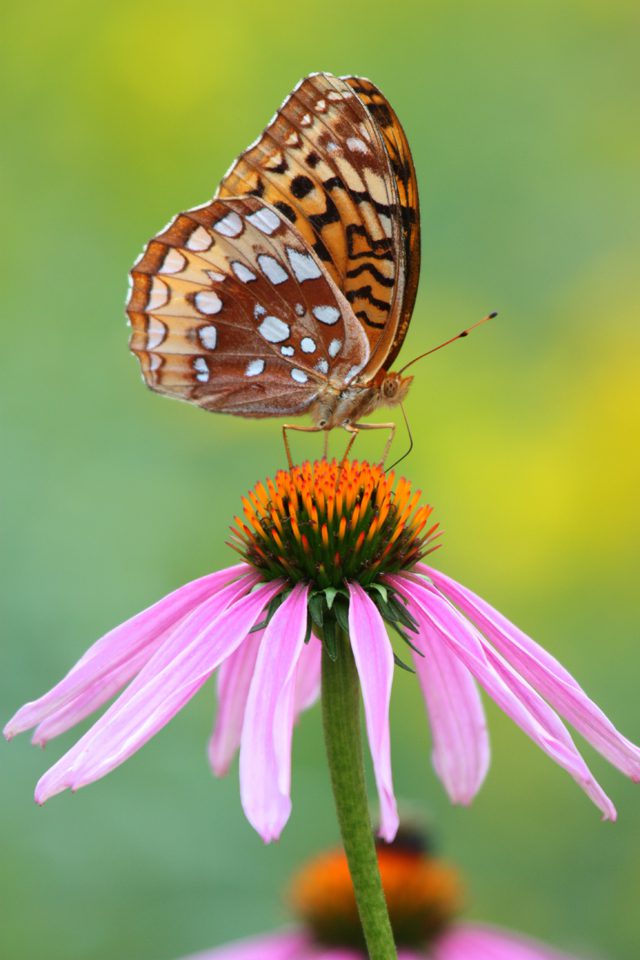 Many of you know the story: the one about the caterpillar that’s hungry. Very hungry. He eats and eats and eats. And he is STILL hungry. And then he becomes a butterfly! (Sigh. If only that would happen to humans…)

But HOW does that chubby little guy turn into a beautiful butterfly?

Let’s learn! There are four stages of a butterfly’s life: egg, larva, pupa, and adult. (1)

In the first stage, the mama butterfly lays a very small, round or oval egg (appearance depends on the type of butterfly). She picks a very specific leaf that she knows her little babe will eat once it’s hatched a few days later. If you look closely enough at the egg, you might even be able to see the tiny caterpillar growing inside! (1)

Once hatched, the egg has progressed to stage two: the caterpillar, or larva. This is the part where the gluttony begins (although, unlike the book, caterpillars don’t generally eat pickles and salami and ice cream…). The caterpillar behaves like a free-living, eating, growing-but-developmentally repressed embryo. (2)

During the few days or weeks that it is active, it will devour its favorite plant to the tune of its own weight many times over. (2) They stuff their faces so they can grow quickly. And grow they do! Their exoskeleton (skin) doesn’t stretch or grow though, so they “molt” (shedding the outgrown skin) several times during this stage. (1)

Once the caterpillar has reached critical mass, it’s ready to move on to stage three: The pupa or chrysalis. That hungry caterpillar finally gets full, and finds a comfy place to molt into a shiny chrysalis. That’s where the magic happens. Within its protective casing, the caterpillar radically transforms its body.?But be prepared – magic isn’t always pretty!

First, the caterpillar digests itself, releasing enzymes to dissolve all of its tissues. It basically becomes a nutrient-rich soup, feeding the imaginal discs. These highly organized groups of cells survive the digestive process – they’ve been a part of the caterpillar it’s entire life. Before hatching, when a caterpillar is still developing inside its egg, it grows an imaginal disc for each of the adult body parts it will need – discs for its eyes, wings, legs, and so on. In some species, these imaginal discs are dormant; in other species, the discs begin to take the shape of adult body parts before the caterpillar forms a chrysalis – some caterpillars walk around with tiny rudimentary wings tucked inside their bodies.?Inside the chrysalis, once all of the tissues are digested, those discs use the protein-rich “soup” to fuel the rapid cell division required to form the butterfly body parts. One disc could begin with only 50 cells and increase to more than 50,000 cells by the end of metamorphosis. (3)

This type of metamophosis is called holometaboly – a full change – and is the complete – and often dramatic – change from a worm-like larva to a large-winged adult. It’s a highly sophisticated chemical suppression of developmental processes. Though only 9 of 26 insect orders are holometabolic, this accounts for 80 percent of all insects (butterflies, beetles, moths, flies, bees, wasps and ants are majority stakeholders).(2) 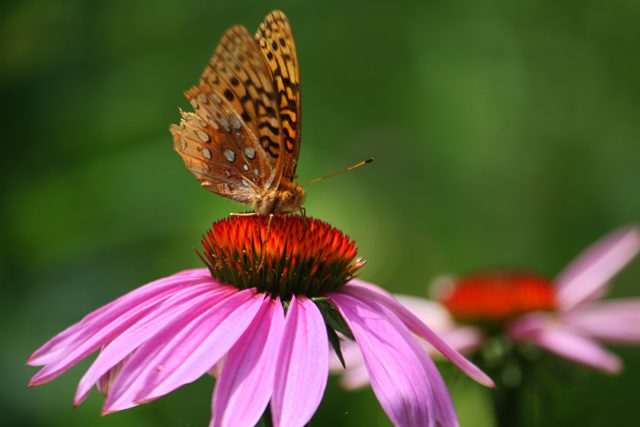 Once metamorphosis is complete, the caterpillar is ready to emerge in its final, adult stage: the butterfly. When it first comes out, both wings are soft and folded against its body. It rests a bit, then pumps blood into the wings in order to get them working and flapping. They’re ready to fly just a few short hours after cracking out of the chrysalis and head off in search of a mate in order to continue the cycle!