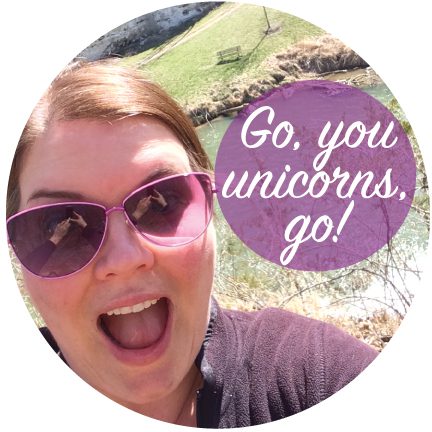 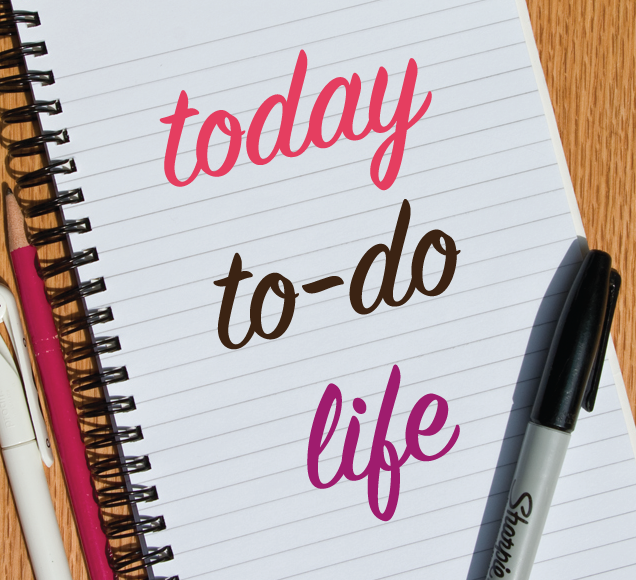 Fall seems like a good time for doing things. Days are still long, the weather is good and opportunities (necessities?) abound for fun, exercise, and taking care of da house and yarden. But that very fact often drives me into a funk. Because I’m all like, I don’t wanna do things! Mainly, I want to drink beer with friends and/or watch all the Netflix. But, ultimately, doing things helps you get out of pretty much any funk, so here I am, doing things. (Because, yes, even this crazy cheerleader-type lady who started a sun-shiny magazine about inspiration gets in some funky darn funks.)

So what things am I doing? Well, for starters, I’m writing! (I know; it may not seem like it just yet.) Taking the time to just write (Ha. As Hemingway said, “There is nothing to writing. All you do it sit down at a typewriter and bleed.”) is something I haven’t done in a long, long time. And that’s a damn shame.

My trouble is finding the motivation.

The ball we need to get rolling can feel like an 800-pound boulder. But if we can just get it rocking past the tipping point, we can watch that mother-flipping thing roll down the whole damn hill. Momentum, baby. It’s what we’re trying to harness here. I have a few tricks to make this work in my life and I thought I’d share them here today (spoiler alert: I’m a list fan).

It’s fitting that the first thing on my list today is “make a list” (check that off the list, woot!). I have three lists: “today” and a general “to-do” one sitting next to me, and a “life list” on my computer. Let’s talk about today lists first.

Sometimes I look at the big (giant) general to-do list of things I need to get done and I feel over-freaking-whelmed. Give yourself a break –make a breakout list! Breakout lists are smaller – for me, usually just a quarter of an 8.5×11 page – and only have the things I need/want to get done on one day. Breakout lists also give me the chance to cross things off twice (on the to-do and today lists), which is so very, very satisfying (amIright?).

But still: how to get the motivation? Do the easy stuff first. I have been known to write, “take a shower” on my list. (Especially post-becoming-a-parent, because, damn, it can be hard to find the time!) We work from home, so my day list is a little unique in that I can include housework too. The thing that gets my ball rolling is laundry (that sounds a little dirty, ha)! That blessed machine does all the work, but somehow makes me feel like I’m getting sh*t done! I often do laundry first-thing in the morning. Sometimes I even shower WHILE the dryer is going…cause then we’re really getting somewhere! If you have a more traditional job, maybe you can write, “organize desk” or “make office coffee” or even “clean up computer desktop”. A tidy workspace can make the day seem so much brighter. And, look: You can cross something off your list already. Go, you!

This is the stuff you need to get done – written down because you don’t want to forget, but know you can’t possibly get it done in one day (or month) – all in one place. This list is often long, and can freak me out. I sometimes hide this list and only look at what’s on for today.

What are your dreams? Your goals? Think this month, this year, the next five, and, ultimately, your entire life. Breakout lists can come handy here too! 🙂 My current life list is titled “35 Before 35” – I turn 35 next year, and made this list at age 30. Before that, I had “30 before 30” made at age 22. I had some “rollover” goals move from that list to current – NBD, folks. Just writing goals down is a motivator. If you’re making a life list like this, make sure to also include some easy stuff. (See 1A, re: motivation.)

2. No fun Internet until you get the most important thing on your list done.

3. When you find yourself getting off track – trailing into your time-wasters – go do something else on your list. For me, it’s usually house stuff or prepping/cooking food. I recently starting making exercise the “hey, do something for yourself” thing I do too (hopefully that’s a new habit!).

None of this is to say you can’t spend a little time on Facebook or searching for vintage campers on Craigslist; just recognize when you’re doing those things to simply avoid other work.

4. Pat yourself on the back

Stop being so damn hard on yourself. Once you give yourself a break, you’ll realize you’re doing pretty well in this here life. Did you get one thing done today? Did you even slightly utilize your day in a way you wanted? Then give yourself a high five, friend, because this is LIFE! No guilt, no worry, no regret. Are there only five minutes left in the day and you didn’t get one thing done? Do one little thing, then plan to ride the momentum into tomorrow. And then pat yourself on your damn back. You got this. 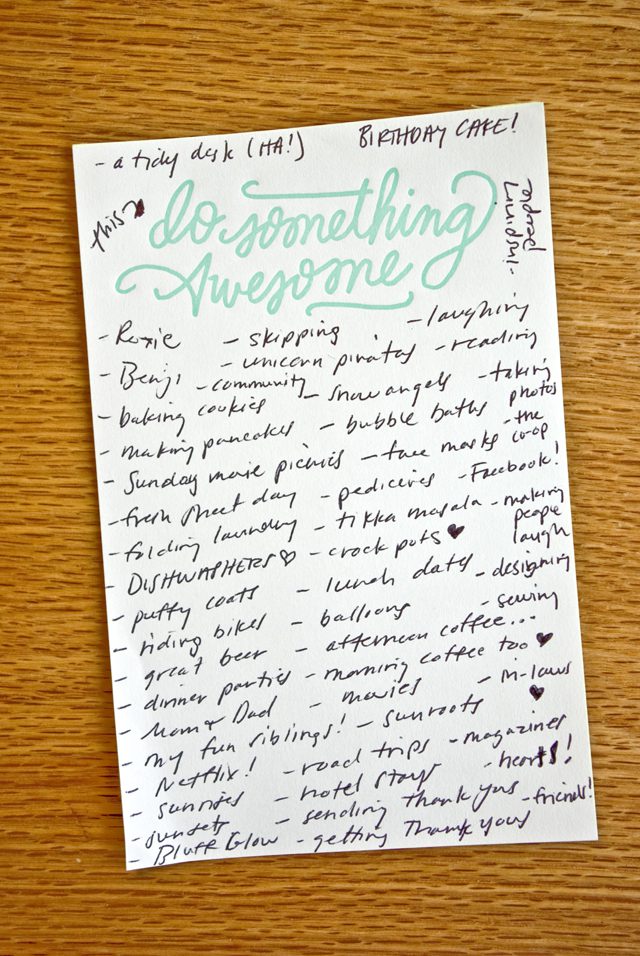 Some days (days like today, when you get 10 inches of snow in the middle of an early spring), it’s hard to feel upbeat about everything. Or anything. Life can feel overwhelming, unlucky, and, honestly, kinda crappy.

BUT! But! There’s always a sunny side waiting for you, and always a way to realize “hey, I’m more fortunate than I think!”

Enter Happy Lists. This is something I started doing in college when I felt a little down or (shhh, don’t tell my parents) homesick. I would take a piece of paper – it can be big or little – and absolutely cram it with things that made me happy. From coffee to best friends to fancy sheets to scarves to the first tulips to chocolate to, yes, even fresh snow. Usually by the end I was feeling…gasp…happy! It’s a great habit I continue to this day (I just made the above list this morning, ‘cause I gotta admit, I wasn’t happy about all that pretty snow out there. I love a March spring.)

Sometimes I will also tuck the lists away in a drawer or folder or coat pocket. It’s fun to happen upon them randomly later – (almost) as good as finding a long-forgotten $20 in a spring jacket!

Anyway, we thought a happy list might be a good activity on this snow day! Put together your list, get happy, and then gear up and head out for a little frolic, because, c’mon: This has gotta be about it for winter, right?!?

Bonus: If any of the things on your list are things you can actually DO, go on and do some. This greatly increases the happiness factor. I’m going to make my tikka masala right now!

P.S. Excuse my terrible handwriting! I don’t write with a pen these days nearly as often as I did in college!

P.P.S. “Do Something Awesome” paper by Iowa letterpress designer Meg Gleason of Moglea. 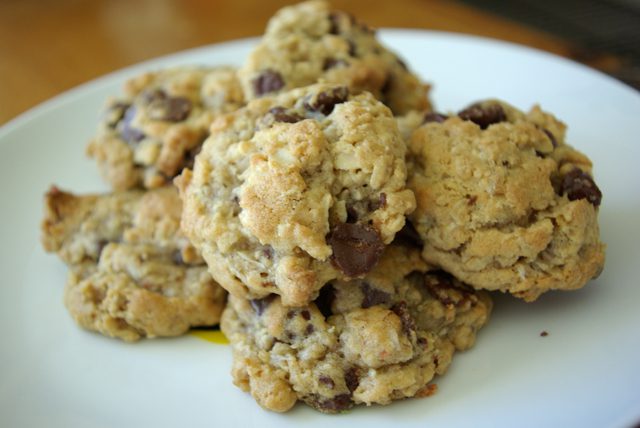 One of the things on my “30 Before 30” list was to perfect the chocolate chip cookie. I was a bit naïve when I wrote that – there are many different types of chocolate chips cookies, and I’ve now decided one shouldn’t necessarily discriminate – but this one is my go-to, and pretty darn good. 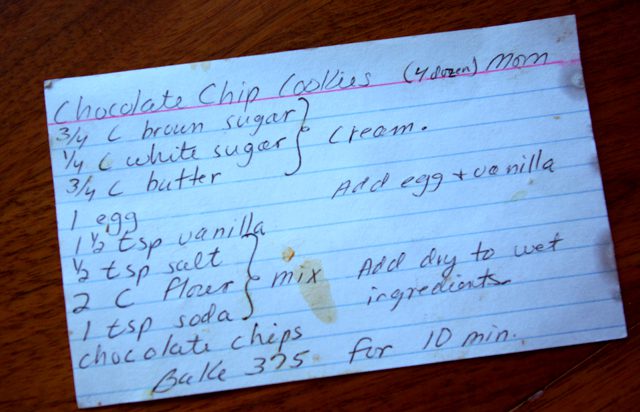 It all started with my mother-in-law, Bev’s, recipe. It’s a winner on its own, but I wanted to cut some butter and add some oats. Then I had the GENIUS (pure genius, I tell you) idea to start making double batches and freezing dough balls. 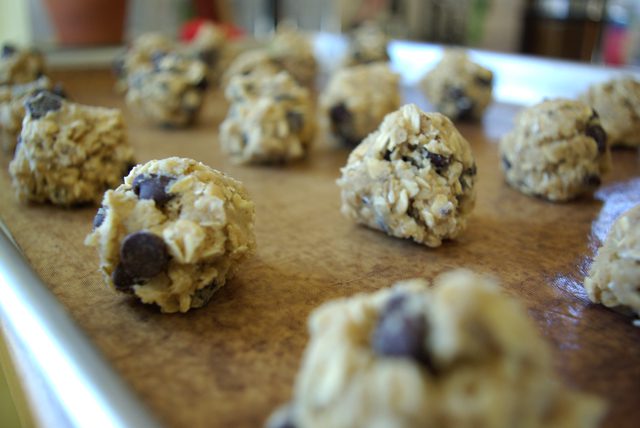 Simply put a reusable baking liner or parchment paper on a large cookie sheet, scoop out dough balls (I use a tablespoon), and put in the freezer. (Usually they’re balanced on some frozen vegetables, a pack of bacon, and frozen ravioli in ours!) 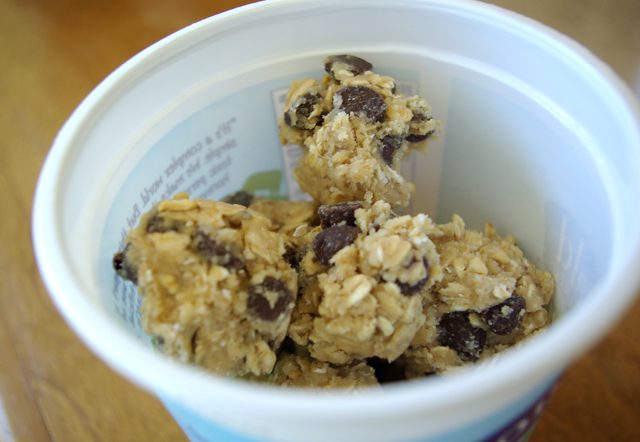 When they’re frozen solid, you can move them to a container for easier storage (we use yogurt containers). Then, when you feel like a chocolate chip cookie, you can just pop a few on a cookie sheet and bake – no need to thaw. Viola! Fresh cookies in 10 minutes! Because no matter how perfect a recipe, a fresh chocolate chip cookie is better than a day-old one. For sure. (I would pin that sh*t if I were you…) 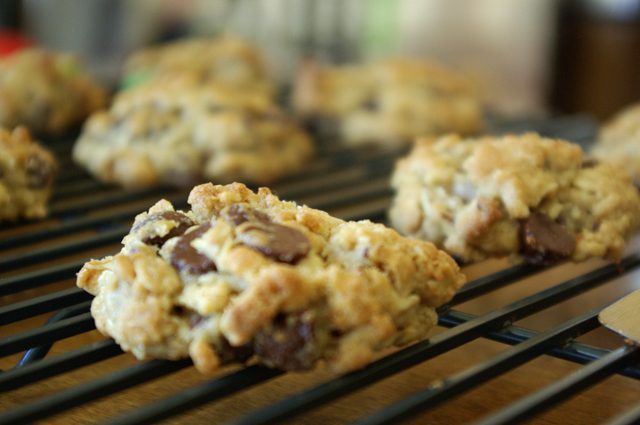 So, without further ado: the chocolate chip cookie recipe!

Mix together dry ingredients (I just add them to the top of the wet dough, but stir up the dry stuff on top before I mix it all into the wet stuff):
1/2 tsp salt
1 C flour
1 C rolled oats
1 tsp baking soda

Stir in semi-sweet chocolate chips. I always eyeball them, but if I’m making a double batch, I add nearly a bag! I like chocolate. You decide what’s best for you, but I will tell you that these cookies hold up well to lots of chips.

‘Cause these things are important to know.

Optional: Roughly chop 1/2 C cranberries and add to dough when you add chocolate chips (I stopped adding cranberries after Roxie was born because the extra step – cutting board and knife, etc – seemed to be too much work, but they do add a nice element if you’re into that sort of thing!)

Scoop balls onto cookie sheet and bake 10 minutes. Usually I bake about a dozen and let them rest on the pan a couple of minutes before transferring to the cooling rack. The rest, I freeze! 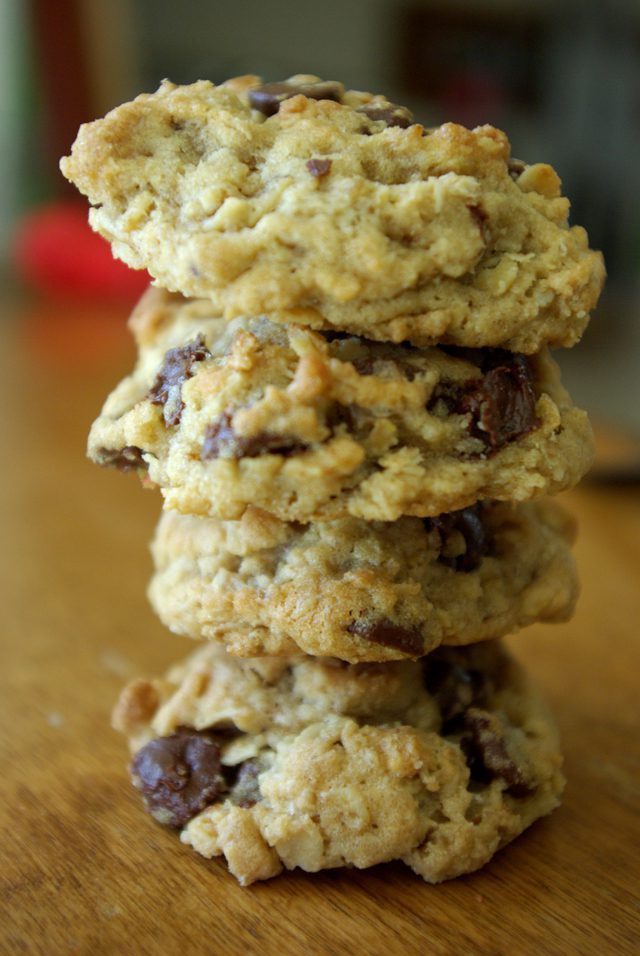